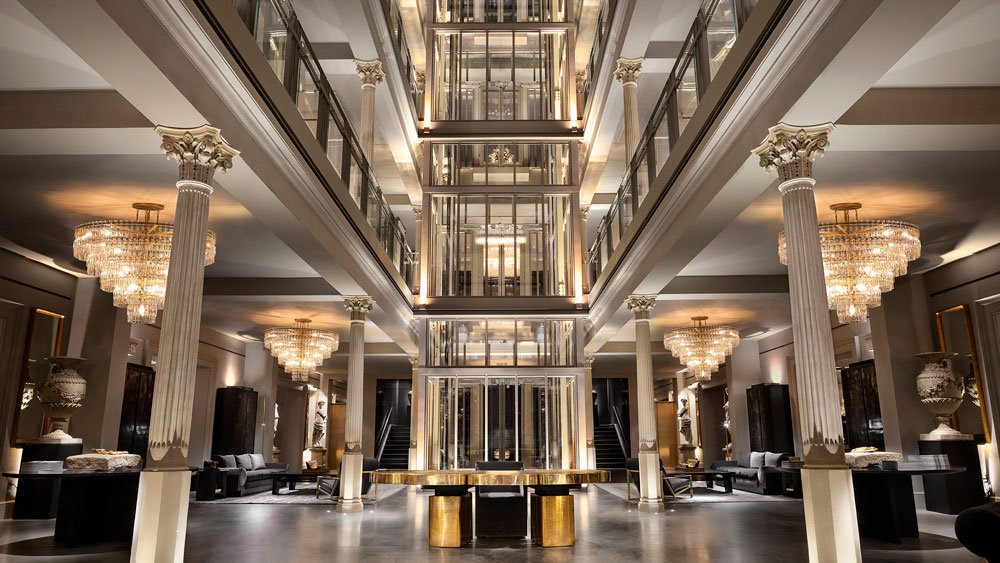 Restoration Hardware is a design-centric retail powerhouse that’s on the move. Hailing originally from the comparatively sleepy town of Eureka, Calif., the brand rechristened itself as simply RH in 2012. Most recently, RH dramatically increased its reach with the opening of a 90,000-square-foot shop-turned-gallery—itself the product of the dramatic restoration of a late 19th-century landmark building in Manhattan’s Meatpacking District once owned by John Jacob Astor.

Located on the corner of Little West 12th and Gansevoort streets, just a stone’s throw from the new Whitney Museum of American Art, the bones of the structure have been reimagined by California architect James Gillam of Backen, Gillam & Kroeger, with the addition of a five-story steel-and-glass structure that rises up through its original brick facade, which has been topped by a glass-encased year-round roof garden, restaurant, and wine bar. The floors are connected by a skylit six-story central atrium with a transparent elevator to whisk discerning customers from one design department to another.

A late 19th-century building has been reimagined by California architect James Gillam of Backen, of Gillam & Kroeger.  Photo: Courtesy RH

Beyond the abundant furnishings that range from classic to modern for those looking to up their domestic game, RH offers its clientele something of an art experience with the installation of New York Night, an array of handblown crystal lights that fills the entire height of the atrium staircase—which was created by Los Angeles artist and designer Alison Berger.

The commission follows up on RH’s relatively recent foray into the art world with the acquisition of the first edition of Random International’s wildly popular immersive environment Rain Room in 2013, which attracted throngs of museumgoers when it was on view at MoMA that year and when it had its subsequent showing at the Los Angeles County Museum of Art. More recently, RH has teamed up with none other than Australian-American actress and philanthropist Portia de Rossi, who is the founder of General Public, a “publishing company” of sorts that uses 3-D scanning and printing to accurately copy artworks by emerging artists for wider circulation. (As those who are familiar with the RH brand know, the company is quick to point out that many of its products have been developed in collaboration with artists and designers.)

As for the choice of location for the new space, says RH chairman and CEO Gary Friedman, “The Meatpacking District exhibits a spirit of innovation and irreverence, and we were inspired by that spirit to create a retail experience worthy of such an iconic corner in what is arguably the most important city in the world.”

The new digs were unveiled amid great fanfare during New York’s Fashion Week with a star-studded guest list that included de Rossi along with other such notables as Karlie Kloss, Nicky Hilton Rothschild, Ryan Seacrest, and Martha Stewart.