The souk in Marrakech is full of secrets. It’s a warren of dusty, rust-red walls, mostly six feet high or more, concealing the courtyards and buildings within from the prying eyes of anyone wandering down the narrow lanes. Restaurants, shops and cafes appear, almost conjured, from nowhere. A small sign might be the only evidence from the street, but duck through the door, and there’s a wonderland within. Nothing, though, suggests the presence of a vast complex hidden at the medina’s heart, in the neighborhood of Dar El Bacha: a riad that is one of the largest private homes in the city, other than the king’s palaces. It’s fitting, then, that the owner named his estate the Secret.

The nine-bedroom, 14-bathroom mansion has been a passion project for the owner, an Italian businessman who has lived across the world during his long career but now considers Marrakech home and resides full-time in the 23,680-square-foot riad, with its 17,000 square feet of terraces and gardens. The idea behind the sprawling property was simple: He wanted to create a haven for his family and a true feeling of permanence for the first time. He has particularly prized the estate throughout the pandemic, when it’s been an oasis he’s rarely left. 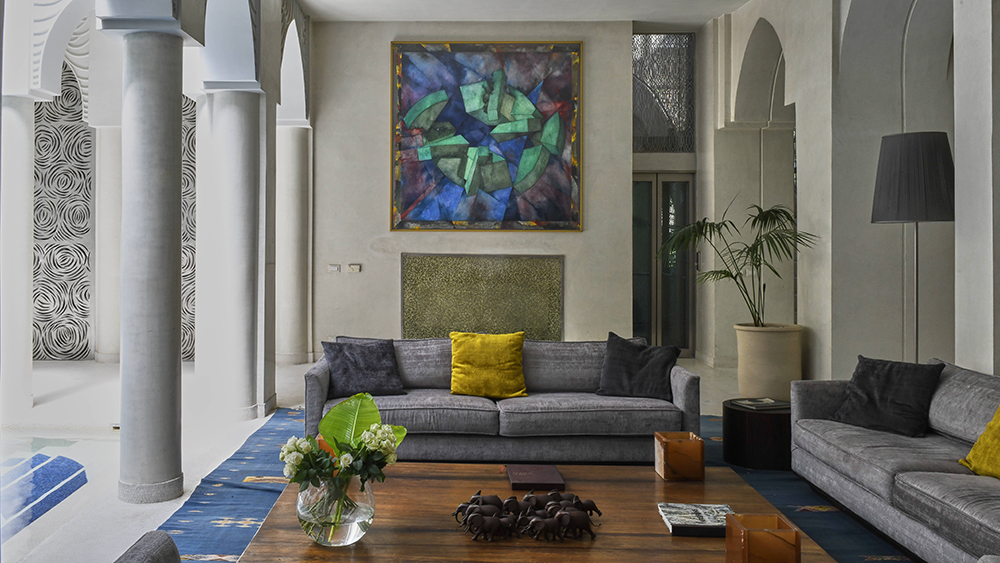 A sitting room that blends modern furniture and an abstract painting by Giò Pomodoro with traditional Moroccan architecture’s arches and metalwork.  Jean Cazals

It was the late 1990s when the owner, then newly remarried and a little restless, first mooted the move. He was living with his wife, from whom he is now divorced, in Los Angeles and was far from content with the SoCal lifestyle. Why not decamp to Marrakech, a place he’d loved for more than a decade? He had first visited the Moroccan city in the early 1980s and returned frequently. It was only as his real-estate venture evolved that he gradually realized he could actually make it his primary base.

The first challenge was finding an ideal site, so he tasked a local friend with hunting for a good property. That chum quickly showed him a little house, a 2,150-square-foot riad, that classic of Moroccan architecture, a home ranged around a central courtyard with a cooling fountain. “It was just for fun,” the Italian recalls, then pauses to laugh. “And then I lost control of myself.” Eighteen months later, he completed his buying spree, having accrued a total of 21 adjacent riads at breakneck speed. He had a vision, a grand plan, for the huge parcel of land so aggressively assembled: Demolish the structures, many of which were beyond repair, and then hire Morocco’s superb local craftsmen to construct a sprawling villa for him. The catch: Those craftsmen worked exclusively by hand. But as a newcomer, he felt it was important to funnel money directly into the community, so he was willing to take it slow.

On a whim, he chose not to work with an architect—instead opting to collaborate with an artist who understood construction. One man seemed ideal, an acquaintance from the fashion scene in Milan: Kris Ruhs, who told him the advantage of working with an artist is that the home will be a “beautiful box,” rendering the contents less important. “When the box is beautiful, whatever you put in, it’s still beautiful.” Now 69, Ruhs was born in New York of German parents but lives and works in Italy; his longtime creative and life partner is erstwhile magazine editor and 10 Corso Como concept-store pioneer Carla Sozzani. Enormously versatile and creative, Ruhs has designed furniture and ceramics, made paintings and sculptures and worked on interiors, often in partnership with Sozzani. Most importantly, he shared his client’s love for Morocco and had already established a fabrication facility there. Still, this house became an enormous undertaking, even for him. “Originally the project he called me about? It was a small house,” Ruhs recalls. “Then he got the Marrakech Disease—you know, where you just keep buying one riad after another. I understood what he wanted. Everybody has a vision of how they’ll live. In Marrakech, you’re allowed to live that dream.” 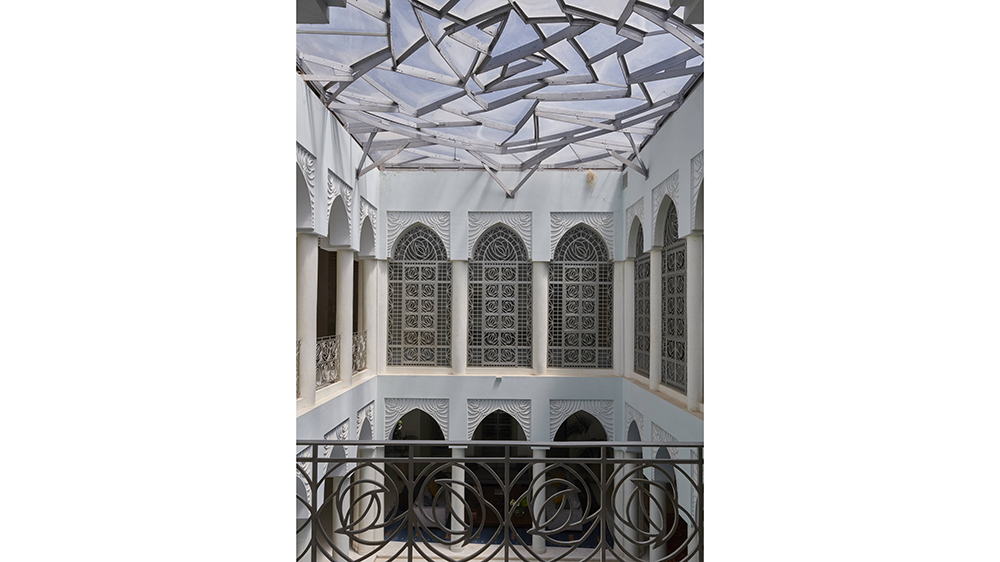 A view of the artistic glass ceiling, designed by Kris Ruhs.  Jean Cazals

Ruhs knows that firsthand. Like his client, he started visiting the city in the 1980s, two decades after Yves Saint Laurent and his acolytes had first flocked to Morocco, seduced equally by its aesthetics and its indulgences, and popularized the ancient North African spot among the jet set. “When I started coming to Marrakech, it really slowed things down for me—the clock ticks a little slower there,” Ruhs says. “In New York, you’re always on deadline and have to be at the next event. In Marrakech, you can drink a tea, and if you’re an hour late for a meeting, nobody says, ‘Where the hell are you?’ ” Soon after discovering the city, Ruhs himself came down with a bout of Marrakech Disease, snapping up a few riads to reconstruct while real-estate prices remained low. For the artist, the lure of a home in the walled city was also creative: being in such close proximity to world-class artisans in ceramics, metalwork and more. He quickly added a workshop of his own in Marrakech to produce and export his designs worldwide. It was this workshop that provided some of the artisans who labored on the villa his Italian client commissioned.

As an artist rather than an architect, Ruhs prefers to be a hands-on supervisor on his projects, finessing the engineering know-how of the builders with his distinctive aesthetic. The collaborative method was ideal for this project, as the workers used age-old techniques rather than machines in demolition and construction. So, once the original walls of those 21 riads were razed, workmen salvaged many of the bigger stones for the new home. Donkeys were dragooned into service, first to remove the unwanted debris and then to bring materials on-site for the large construction team. “Sometimes I had over 100 people working on the property at the same time,” the owner recalls.

He remains dazzled by the low-tech achievements of animal and man together. “What makes me proud of this house is that it was done 100 percent by hand—no cranes, no machines to make the cement, everything was done on the spot,” he says. Indeed, he remembers watching workmen examine a staircase they had built, checking the smoothness of the curve. It wasn’t good enough for their standards, and they opted to start afresh. “They started to destroy it by hand—Boom! Boom! It took them three days. A machine would have done it in an hour.” Metalwork was smelted in a fire, as it has been for centuries, rather than machine-cut. Throughout the two years and three months of construction, Ruhs continued to tweak and pivot his design, which was intended to take traditional elements of Moroccan architecture and remix them with contemporary details such as larger windows. Adjusting in medias res in such a way is easily done in Morocco, compared with Europe or America. “If you decide you want a window here, or to make another window bigger, it’s not astronomically costly to change,” he explains. 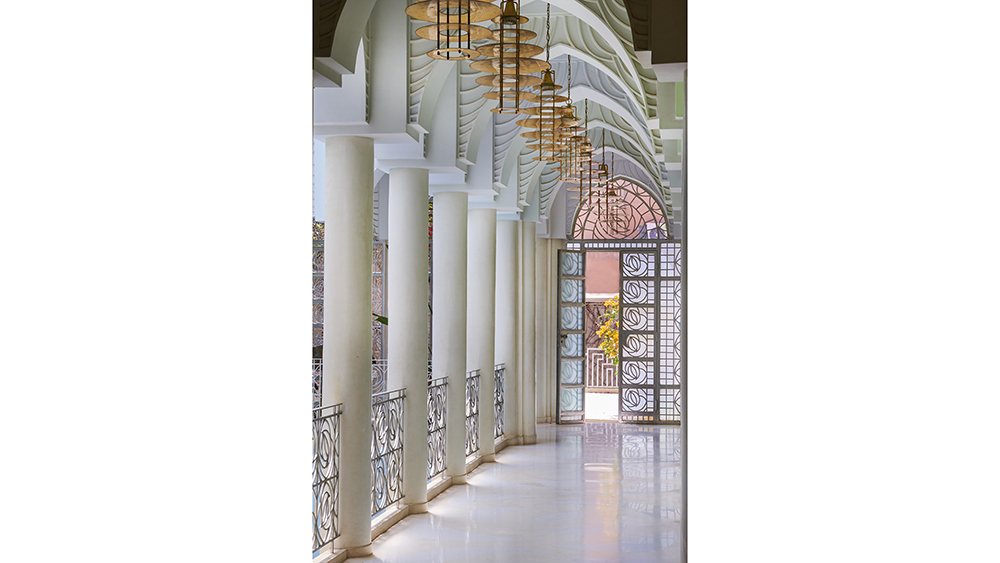 A corridor, with copper light fixtures commissioned from Italian designer Attilio Ladina. The floor is made of cement and marble powder with inserts of Carrara marble.  Jean Cazals

Construction may have relied on Marrakech talent, but the interior is more eclectic, bringing elements from around the world to decorate that “beautiful box.” The owner remains a patriotic Italian, despite having spent his career globe-trotting; he points to the marble in the primary bathroom, quarried from Carrara in Tuscany, the country’s best source. Most marble from those hills that’s destined for interiors has fine gray veins. He disliked that pattern and instead selected a rarer expression from the same quarries that can cost almost three times as much. “I took statuario pure white marble, the one that Michelangelo used to make the Pietà,” he says. “I am crazy for marble and wanted the best pure white.” In the other 13 bathrooms, he told Ruhs to use a mixture of standard marble and zellige, the traditional Moroccan tilework.

Two elements act as dual centers of the complex: a garden and an indoor pool. The greenspace was a concept suggested by Ruhs. Open up as many walls as possible, he advised, and let the outdoors flood the home. Such a choice was a drastic shift from traditional Moroccan architecture, which emphasizes smaller windows and thicker walls for better cooling and insulation. Modern conveniences loosen those constraints, allowing the elements to be managed and enjoyed at the same time. The climate also meant that plants rooted quickly and thrived within a couple of years; the owner now talks enthusiastically of the jungle that’s hidden in the heart of the souk. 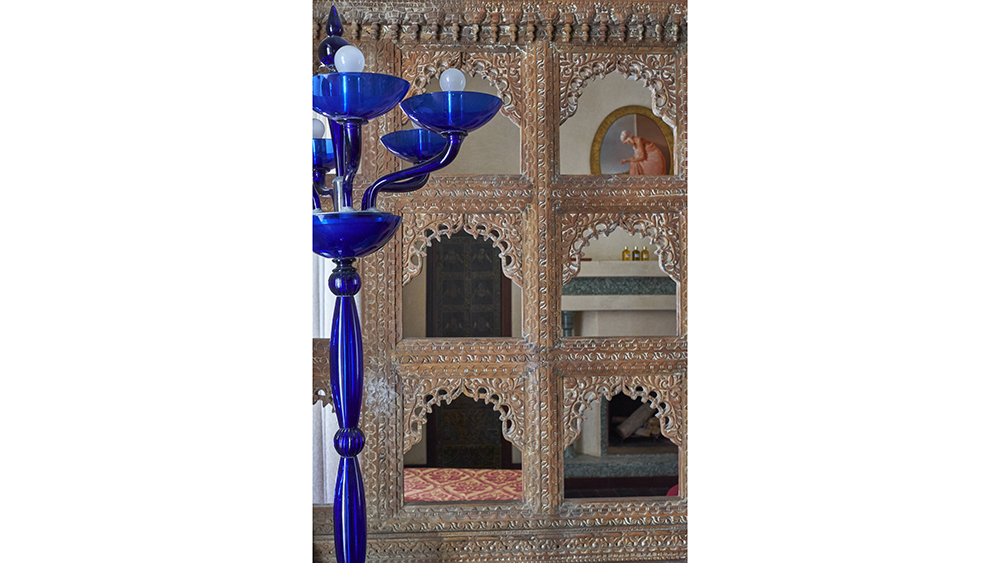 The eclectic furnishings include this Murano glass lamp and carved wooden screens the owner bought in India.  Jean Cazals

Ruhs ensured all four elements were present in the overall design: earth from the garden complex, air emphasized by the vaulted ceilings and open windows, and fire from almost a dozen handmade hearths. At the owner’s insistence, the second center of the villa would provide the water in a plunge pool, like an oasis in the Moroccan desert. Ruhs sketched it out, a double-height space reminiscent of a Roman bathhouse, with a mosaic on the floor of the shallow pool—a rose, a nod to the city’s nickname, drawn from the pinkish-red hue of so many of its buildings. The mosaic was to be made from shards of mirror, so it would reflect the sky above through a huge window in the roof. It proved the most labor-intensive element on the property, Ruhs says. “The guys I started working with on it were annoyed at first,” he adds. “But in the end they loved it. There were so many people working on it.”

Alas, the mirrored pool may have looked spectacular, but its beauty was ephemeral. The owner has largely left the house untouched since completion, tinkering mostly with colors of the walls. But the pool has been an exception, serving as a gentle reminder of the risk he took in hiring an artist rather than an architect to oversee his Valhalla. It paid off in every other aspect of the Secret, with rooms and spaces that seamlessly blend form and function. The pool, though, was a drain. “Kris is a great artist, but sometimes not very practical,” he says diplomatically. The rose mosaic cracked and crumbled, far too fragile for the weight of, and chemicals in, the water. As a solution, about five years after completion, the owner and Ruhs decided together to swap out the mirror for durable tiles—good, Italian-made Bisazza, he says. 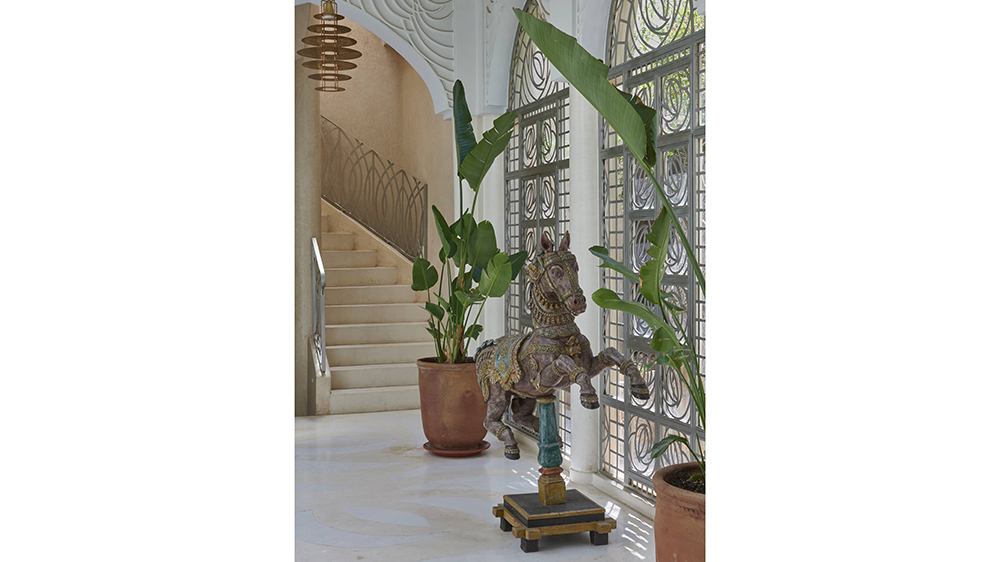 A horse sculpture the owner picked up on a trip to India stands at the foot of a staircase Moroccan artisans built, tore down and rebuilt to meet their own exacting standards.  Jean Cazals

Yet even 22 years after first conceiving of building a home where that single 2,150-square-foot riad stood, the owner remains captivated, perhaps obsessed, with the villa that replaced it, which is more than 11 times that size. “It’s not a commercial project at all; it would be impossible to sell because it’s so particular,” he says. “I did it for myself, to live in and to enjoy life. And I still enjoy it every day.”