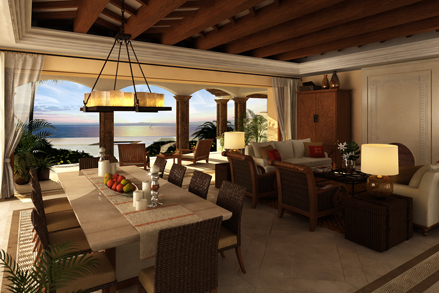 The Ritz-Carlton’s latest real estate venture, The Ritz-Carlton Los Cabos, Quivira in Los Cabos, Mexico, is a 44-residence community on the shores where the Sea of Cortez meets the Pacific Ocean. The four-to-six-bedroom homes, ranging from 4,400 to more than 6,500 square feet, feature unobstructed views of the water and access to more than three miles of private beaches. Among the amenities are two 18-hole Jack Nicklaus Signature golf courses, featuring more oceanfront holes than any other development on the Baja peninsula, and a Pacifica Holistic Retreat and Spa from Pueblo Bonito Oceanfront Resorts and Spas. Construction began in early 2008 on the building infrastructure, and sales have already commenced on the homes, which are scheduled to be completed in late 2009. Prices start at $4.8 million and go to $11 million, which buys you a six-bedroom home with guest casita. (www.QuiviraLosCabos.com)