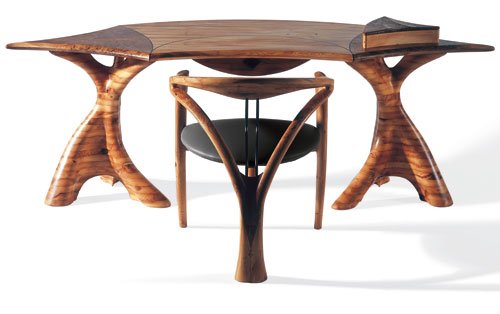 A few miles from Joseph Walsh’s 19th-century-style studio in County Cork, Ireland, a forest of yew trees adorns the countryside. When searching for materials and inspiration for his furniture pieces, however, the designer prefers to immerse himself in the environs of his clients. The chaise longues he created for Park Hotel Kenmare’s Sámas spa in southwest Ireland, for example, incorporate olive ash and granite that Walsh salvaged from the spa’s construction site. But every so often, Walsh, who learned woodworking from his grandfather, departs from this client-influenced approach to design and build furniture that showcases the evolution of his work. Two such pieces are this desk and chair, which combine three native Irish woods: the yew that grows a short distance from his studio, burr elm, and ancient bog oak. For Walsh, the pair pushes the boundaries of design with what he describes as a “feeling of momentum; soft-sculpted forms like petals of a flower falling out of the air.”