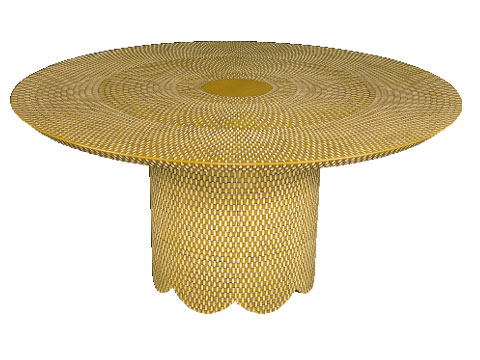 “I’m addicted to simple forms—ovals, spheres, and squares,” says John Eric Byers. His furniture is strikingly elementary in shape, but the surfaces are tightly coordinated arrangements of incised and painted patterns.

About a year ago, Byers moved from Oregon back to upstate New York, where he grew up. He still gravitates to painted wood pieces, but the trees around his studio have influenced a quieter palette. Now, instead of painting his furniture in eight different colors at a time, he has toned it down to a more subdued white on white or mustard on white.

Cake, a five-drawer chest ($14,500), and Spun, a small pedestal dining table ($15,500), were part of a recent show of his work at the Snyderman Gallery in Philadelphia. Form and function met under several coats of milk paint, a labor-intensive formula of milk protein, lime, and earth pigments that has been around since Egyptian times and produces a smooth, tactile surface that Byers finds irresistible.