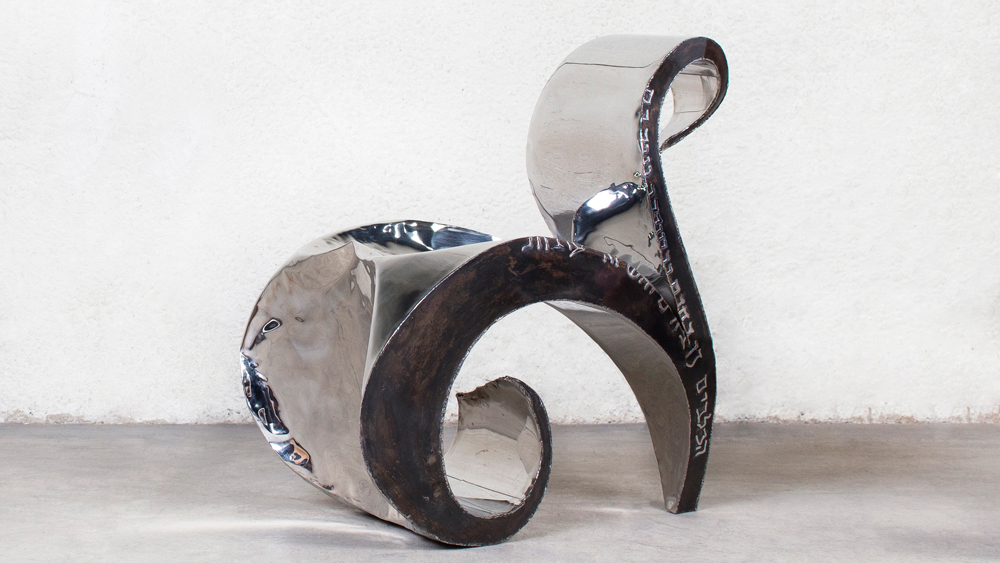 Ron Arad has been going rogue professionally for decades. The Tel Aviv born, London-based industrial designer and architect has made his mark turning out loopy, dynamic designs that have tested the limits of both materials and (occasionally) conventional taste. He has created works for major brands in every category, including the zany, amorphic Matrizia chair for Moroso, which was inspired by a discarded mattress. His stunning, limited edition crushed pewter champagne cooler for French house Ruinart skipped all the formalities and presented the kind of exuberant body that only the award-winning designer could get away with.

While his daring, forward-thinking designs are familiar to most, not many people know of his early pieces.  “Fishes & Crows,” a selling exhibition of Arad’s important early works, seeks to change that. Opening on June 21 at the noted New York gallery Friedman Benda,  the showcase casts the prolific designer in a new light—and serves as the first solo exhibition of Arad’s work since the gallery presented Guarded Thoughts in 2008.

Created between 1985 and 1994, the corpus of 16 brutalist steel pieces—largely forged from found steel objects—explores the raw physicality of the material. “For Arad, this decade was marked by constant experimentation, motivated by a profound questioning of the status quo. This excavation of new possibilities culminated in the some of the most iconic works of late 20th-century design,” says Friedman Benda founding partner Marc Benda.

During this formative period, Benda explains, Arad eschewed machine tooling, a hallmark modernist mass production, in favor of lower-tech and what he perceived to be more immediate methods. “Arad was able to coax remarkably expressive volumes out of metal with such basic tools as a hand welder, a metal compactor, or a rubber-headed hammer,” he says, citing the designer’s iconic Tinker Chairs from 1988. These hammered works, he says, “demonstrate the potency of these direct means. Paradoxically smashed into existence, they extended the psychological effect of design into unprecedentedly confrontational territory—marked by collisions of raw materials, industrial methods, and complex abstraction.”

Among the seminal pieces from this early period included in the exhibition is Tinker Chair, a Cone Screen from 1985, and Arad’s Deep Table (1987). The works carry price tags up to $500,000.

“Arad’s early practice, with its roots in Britain’s underground punk scene, served as a design counterweight to the slick and populist Memphis movement emanating from Milan at the same time.” Only later, Benda says, did the designer begin to explore the more polished and precise forms with which he is so closely associated today.