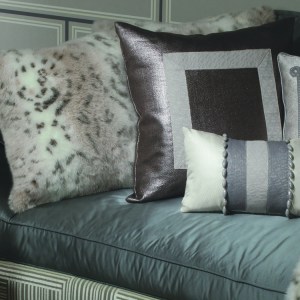 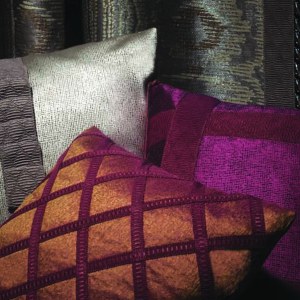 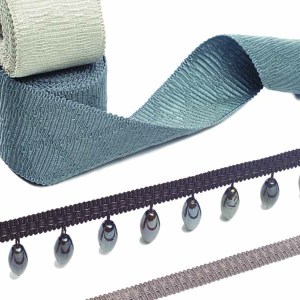 Samuel & Sons, the premier passementerie company in the interior design community, introduces the Lumiere Collection, inspired by the interaction of light, metal and fiber, and the influence they have on each other. Lumiere is a radiant collection of trimmings that empowers interior designers with innovative patterns and colors to bring their rooms to light.

The collection is composed of four contemporary patterns in ten luminous colors. The reversible Lumiere Ribbed Border reveals masterful construction. The face of the border features a satin rib diamond resembling a plissé. On the reverse, the emphasis is on the metallic, which exudes sophistication in color interpretation and abstract pattern. The Lumiere Glass Beaded Fringe features a gilded linear header from which hand-tied glass beads suspend. The beads are illuminated by their satin, iridescent glaze, which allows them to reflect various hues. The Lumiere Gimp coordinates with the Glass Beaded Fringe by repeating the gilded linear geometry. The Lumiere Cord is a 4-millimeter woven herringbone cord that strikes proportional balance between sheen and matte.

The Lumiere collection from Samuel & Sons is available in the New York flagship showroom, the Chicago showroom in the famous Merchandise Mart and the London showroom in the esteemed Chelsea Harbour, as well as in fine showrooms throughout the United States, Canada, Europe, Asia, Australia, New Zealand and the Middle East.