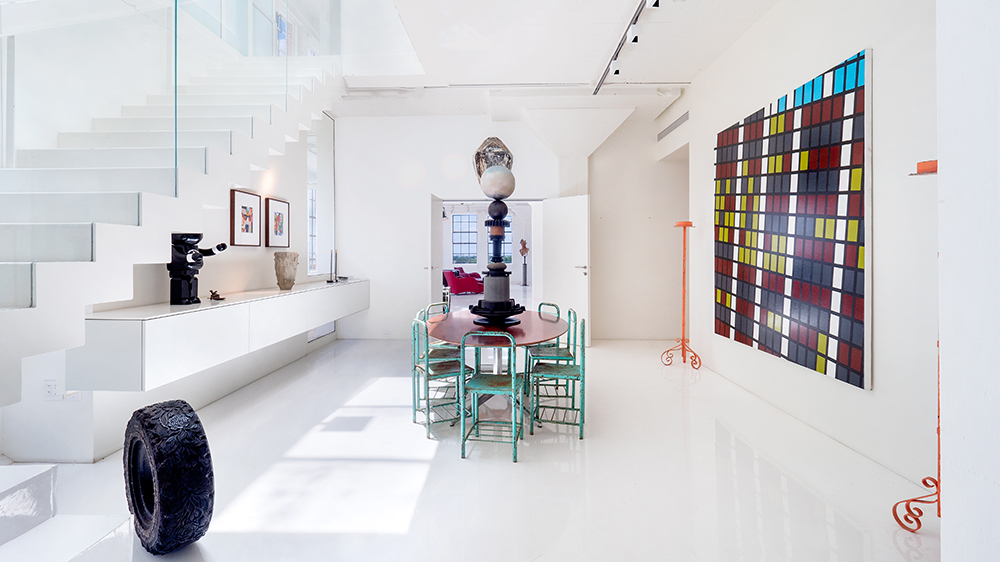 This San Antonio penthouse’s views might be better inside than out, but only because nearly every inch has been designed with art in mind. The stark white walls (backed by thick plywood for hanging heavy canvases) and floors serve as backdrops for paintings, photography and sculpture; the 19-foot ceilings allow for bigger pieces; motorized shades cover most windows for protection; and strategic spotlights illuminate individual artworks. Included with the 15,076-square-foot duplex is an additional 2,000-square-foot, climate-controlled space intended for storage of any items not currently on display. The private cargo elevator—with a fingerprint scan for secure access—from the garage to the penthouse can move oversized works, both within its carriage and above it.

Even the location is art-centric. Sitting in the heart of Southtown, the city’s cultural district, the building is a stone’s throw from the Sir David Adjaye–designed Ruby City art museum and other galleries. It all makes sense when you discover who built the home: the late artist, collector and philanthropist Linda Pace, of Pace Picante Sauce fame. The current owner is also a collector and is offering the blue-chip works shown on the walls for sale for an additional fee.

Originally a candy factory known for its lemon drops, jawbreakers and pecan fudge in the 1920s, the Camp Street building housed several other businesses over the years before being bought by Pace in 2001 and converted into 17 luxury condos.

The penthouse occupies the fifth and sixth floors of the building and has a 7,500-square-foot roof deck. The jetted pool has a resistance current or can be used as a hot tub; from it, you can see any prominent building in the city, from the Frost Bank tower to the old flour mill.

Inside the six-bedroom, 10-bath unit, there are 33 rooms in total, including two full kitchens, with the main one located on the fifth floor, where much of the living space is. The primary suite clocks in at 1,000 square feet on its own, with dual walk-in closets containing an island for storing watches, jewelry and ties and a midnight bar for morning coffee or evening cocktails. The bathroom is also built for two, with a duo of showers as well as a deep soaking tub. A gas fireplace separates the bedroom from a sitting area, while several terraces dot the property.

The view from the roof deck, which is done in heat-tolerant Ipe wood.  Lifestyle Production Group

One wing houses staff quarters—two private bedrooms and baths with a kitchen. Small bars appear in the various living and entertaining spaces. A temperature-controlled room serves as a wine cellar.

It’s an unusual property for San Antonio, for sure, and priced at the higher end of the condo market at $7.25 million, but it’s aligned with the city’s other luxury offerings, says broker Michael Reisor. “Because it’s unique, it’s sort of in a different category,” he says. “Usually homes at this level are freestanding houses. It’s hard to compare this with anything else, just because of the sheer square footage.” He adds that the new owner could split the unit into two residences, if so desired. But it would be difficult to part with such dramatic space so ideal for collecting and showcasing art.