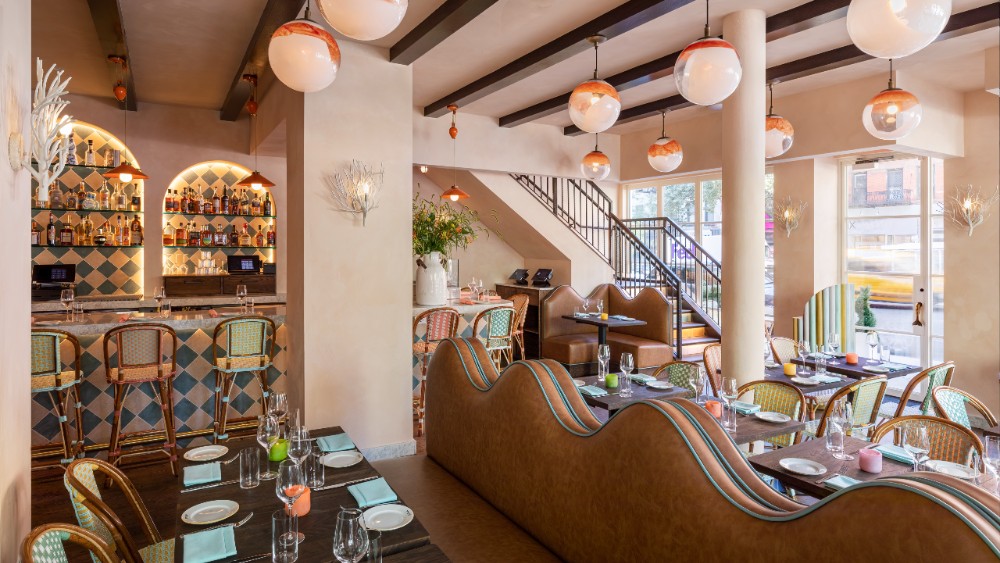 Seafood restaurant Flex Mussels recently unveiled its new flagship location on New York City’s Upper East Side. Originally opening its doors in 2008, the eatery spent 15 years in the East 80s (and also has a West Village branch), but after a fire and eyeing a nearby space, the establishment is back again with a fabulous two-story spot on East 81st Street and 3rd Avenue. For its latest project, Flex Mussels tapped interior designer Sasha Bikoff to showcase her take on coastal-chic design.

Bikoff is known for her use of bold color and unapologetic maximalism inspired by her worldly travels. Her projects are dominated by whimsy, from fantastical silhouettes and ultra-bright hues to contrasting patterns and unexpected execution. Her self-described style is Marie Antoinette at Studio 54, but all of her work is unique and client- and site-specific.

“We were introduced to Sasha’s work through a close hospitality contact [legendary restaurateur Ed Schoenfeld],” says Alex Shapiro, owner and daughter of Flex Mussels’s cofounders, Bobby and Laura Shapiro. “We were immediately enamored with her design. What I love about Sasha’s creative vision is how it is entirely trend-proof. She marches to the beat of her own drum, and her work consistently feels original and different. Throughout the design process, I didn’t feel as though I was designing a restaurant [where] I would see the same light fixtures repeated or the color scheme becoming overused. It felt as though we were designing Flex as a living, breathing being that had its own unique personality.”

The beloved neighborhood restaurant, which opened in this new location at the end of the summer, has 160 seats spread over two floors. Its design is totally unique to this spot and is a stark contrast from the original eatery. The decor features subtle nautical motifs, but in unexpected ways; Bikoff outfitted the space with warm pastel tones, plaster walls and rustic prints.

“The inspiration behind the space was coastal chic, meaning that we wanted to hint at coastal references, but we didn’t want it to feel too gimmicky,” the designer tells Robb Report. “The challenge is that the restaurant is in New York City and not by the sea, so it was about being inspired by the menu but not letting it necessarily drive the design process. Our initial inspiration was drawn from an image I posted on my Instagram of the stairs at Hotel Cala di Volpe in Sardinia, Italy.”

An abundance of texture and color will make you feel at ease while you dine. The walls are neutral with a dash of pink; Bikoff says the goal is to make guests feel like they’re seated within a conch shell. And in lieu of the typical blue-and-white hues synonymous with nautical interiors, you’ll instead notice a lagoon-inspired green-blue color dotting the establishment, paired with a dark wood. Other subtle sea-centric elements include the hostess stand, which echos the edges of a seashell. True to her initial inspiration of a Sardinian hotel, the restaurant has an old-world European rustic vibe, emphasized with classical architectural elements of curved arches, French bistro chairs and colorful terrazzo tiling.

“Murano orange pendant lights hang throughout the space with orange bar pendant lights, both of which were inspired by the colors in 1920s and ’30s Cote d’Azur travel posters and Alex’s branding for Flex,” Bikoff says. “I designed the French bistro chairs in an array of fun colors, also as a nod to the images and colors in these vintage posters.”

“Alex, being a young female restaurateur, also drove my inspiration for the space, as there is an obvious fresh flair of sophistication and playfulness,” the designer says.