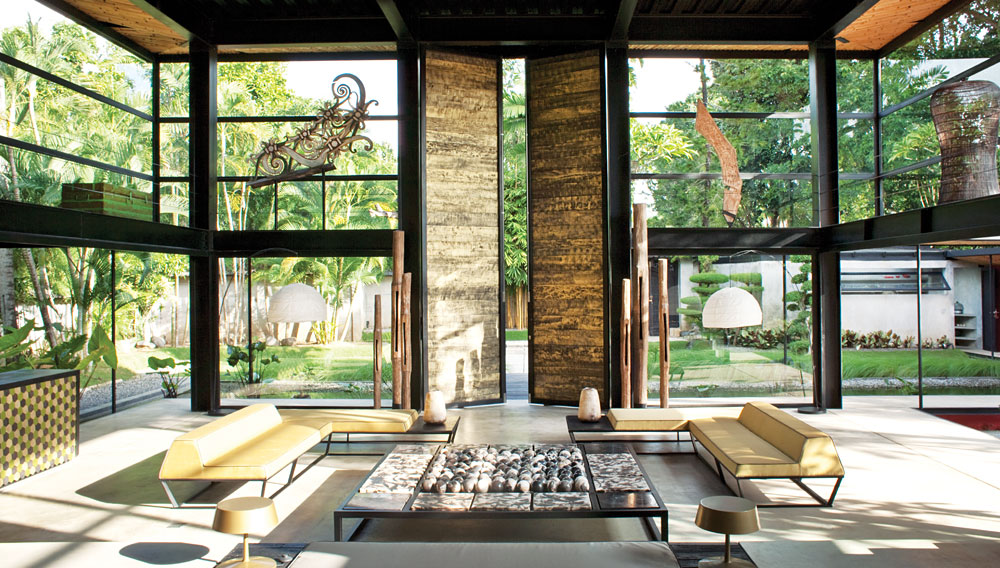 Damien Dernoncourt’s recently completed second home exemplifies his way of thinking. “You can make it beautiful and sustainable,” says the 41-year-old Frenchman, describing the property he shares with his banker wife, Marie-Soazic, and two children—Hugo, 8, and Eva, 5—in Bali’s beachside community of Seminyak. His mind-set is in keeping with the “Greener Every Day” ethos of the jewelry company John Hardy, where he serves as CEO. Founded in 1975 by the Canadian designer John Hardy and headquartered in Hong Kong (with workshops in Bali and Bangkok), the firm creates handcrafted, Asian-influenced pieces using 100 percent recycled silver—a practice the company has implemented since August 2012. Similarly, this residence—a minimalist masterwork conceived by Dernoncourt with assistance from the French industrial designer Nicolas Robert—incorporates materials from the artist’s studio that once occupied this site. The main entrance’s 21-foot doors are former roof planks of ironwood that have been lightly washed in gold.

The site’s original structure—a two-story brick building flanked by single-story wings—needed brightening up. “I wanted light to come in from everywhere,” says Dernoncourt. So he and Robert cut openings in the walls and added onto the back and the sides to create a roughly 8,000-square-foot steel box with concrete floors and glass walls. They obtained all of the materials locally. Most of the shared living areas are in the center, while the five bedrooms with en suite baths occupy the perimeter and face the gardens. The two men filled the home with custom furnishings that “give a modern twist to local crafts,” says Dernoncourt. “The Balinese use a lot of petrified wood,” he adds, so Robert incorporated the material in the living room’s large coffee table, which he surrounded with raku tiles from Gaya Ceramic and Design, an Indonesian company that also works with John Hardy. Asian antiques collected over several years by the Dernoncourts—a 15th-century Majapahit stone bench from Java, three variously sized gongs from Sumatra on a ledge above a stairway, a wooden Japanese stool beneath those stairs—amplify the home’s Eastern style. The living room’s bar features recycled hexagonal sirap (ironwood) tiles, which are found on the roofs of many Balinese homes, and displays antique medicine bottles as decoration on the back wall.

The homeowners frequently entertain, so the house “had to be inviting,” says Dernoncourt, who opted for a breezy, open plan. An extension of the living room, the step-down gathering area showcases a Robert-designed sofa and table, the latter of which is a striking agglomeration of gilded lava rocks and petrified wood. A niche behind the sofa holds antique Sulawesi carved-wood deities. Two midcentury Javanese plantation chairs offer additional seating. Nestled within the LED-illuminated recesses in the ceiling are fans that keep the family and their guests cool. (Solar panels on the roof generate part of the home’s electricity.) The steel stairways sans railings are perhaps surprising, considering the ages of the couple’s children. “We have two rules,” says Dernoncourt. “When you go down the stairs, hold onto the wall, and no running in the house.”

Outside, a separate tree house supported by woody plants and sturdy pylons serves as guest quarters. Beneath the structure is the garden-level bathroom, where a bathtub carved from a granite geode is the focal point. A bamboo ladder doubles as a towel rack. The staircase—the onetime artist studio’s original flight of stairs, which Dernoncourt and Robert harvested from its prior spot and replanted in the tree house—connects the bath to the lodging upstairs.

For the master suite, Dernoncourt and Robert constructed a modern addition of glass, concrete, and steel at the back of the house, above the gathering area off the living room. More than 100 red Indonesian rice boxes form an imaginative floor-to-ceiling headboard that enhances privacy. Glass sliding doors located at the edges of the rice-box wall enclose the room, while a glass door opposite the bed opens onto a garden-view terrace.

Sections of the original artist studio’s brick walls serve as textural accents in the master suite. For one area within the airy space, Robert designed an elegantly angular sofa (it is one of two in the bedroom), which is upholstered in naturally dyed red silk; above it, against one of the aforementioned brick backdrops, hangs an abstract painting by the New York–born, Bali-based artist Pablo Gentile. Across the room, beneath another striking expanse of old brick wall, sits a spare but elegant desk. Also a Robert design, the writing table holds an array of executive accessories, of black palm wood and silver, from John Hardy. To one side of the desk, atop a pair of early-20th-century Dutch trunks, stands an antique statue of Singa, a mythological animal spirit of the Batak culture in North Sumatra.

The grounds include a loggia and a Zen garden. “We love the simple beauty of Japan,” says Dernoncourt, who, after living for years in Hong Kong without room for a garden, was determined to have a lush expanse ornamented with greenery. The walkways are covered with bamboo—a motif that appears throughout the property. He obtained the renewable material from fields planted in Bali by John Hardy.

“The biggest challenge,” says Dernoncourt of the house, “was the discipline of reusing and recycling. We could have imported things and worked differently.” Instead, all of the materials from the site’s original structure were sorted, and whatever was not recycled became foundation and backfill. “The house is very low-consumption, with a small carbon footprint in the way we built it and the way we use it,” he says. “It is a celebration of design and a celebration of Indonesia, which is a country where everything is turned into art.”