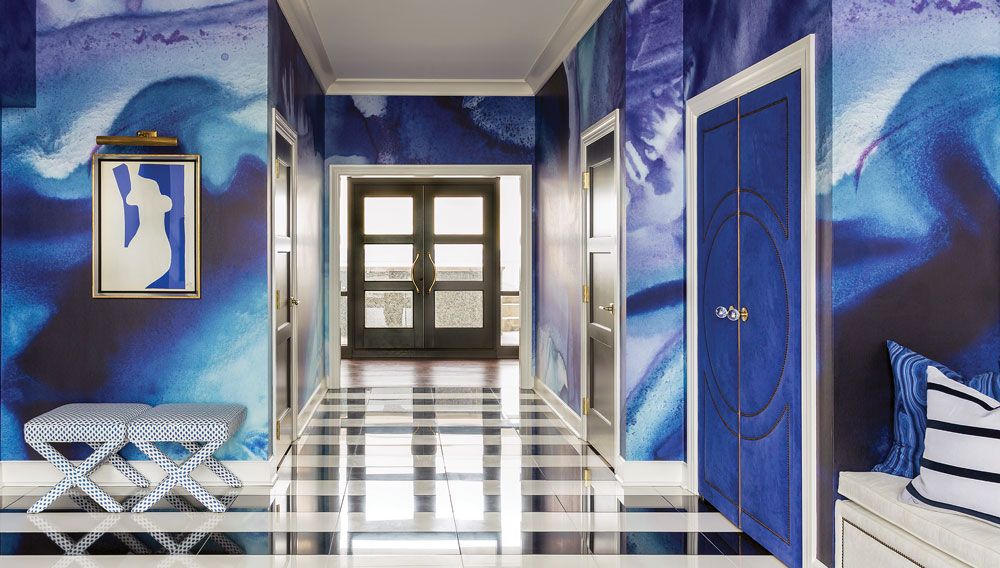 Forget damasks and toiles. When Tracy Hiner launched Black Crow Studios in 2010, she intended for her company to venture beyond traditional wallpaper. Five years later, she still eschews predictable florals and been-there geometrics, preferring instead to take both her clients’ ideas and artists’ works to the wall as large-scale prints. At her Long Beach, Calif., studio, the 33-year-old former fashion designer creates the custom mural-style coverings, which often have what she calls a modern-day trompe l’oeil effect. “People go up to our work, look closely, and often touch the walls,” says Hiner. “They almost always think it’s actual paint on the walls.”

That is the effect of a wall covering in the powder room of a recently refurbished Chicago home (see “The Manor Reborn,”). For that space, the home’s design team chose a pattern from Black Crow’s Watercolor collection, using the covering as a wraparound design statement on all four walls. The moody mix of swirling color derives from an approximately 10-by-10-inch section of a painting by the Southern California–based artist Karla Davison. Hiner enlarged an image of the work with care: “I don’t overmanipulate the art when I’m converting it into a wall covering. We don’t want anything to look digitally made, even though it is.”

Black Crow, with its staff of four (Hiner included), makes wall coverings not only for private homes but also for public spaces (Children’s Museum of Pittsburgh, Beverly Hills’ Greystone Mansion), and installations run the gamut, from itty-bitty rooms to massive ones. In the latter case, a mural might span 200 feet or more and be installed in a series of panels. The subject matter depends on the client, but options abound. Thanks to a recent collaboration with Gray Malin, for example, Hiner is re-creating the photographer’s high-drama seaside images as wall art. “Whether it’s a watercolor image or a photograph, the important thing is to bring a sense of movement to the room,” she says. “That’s what evokes the biggest reaction.”