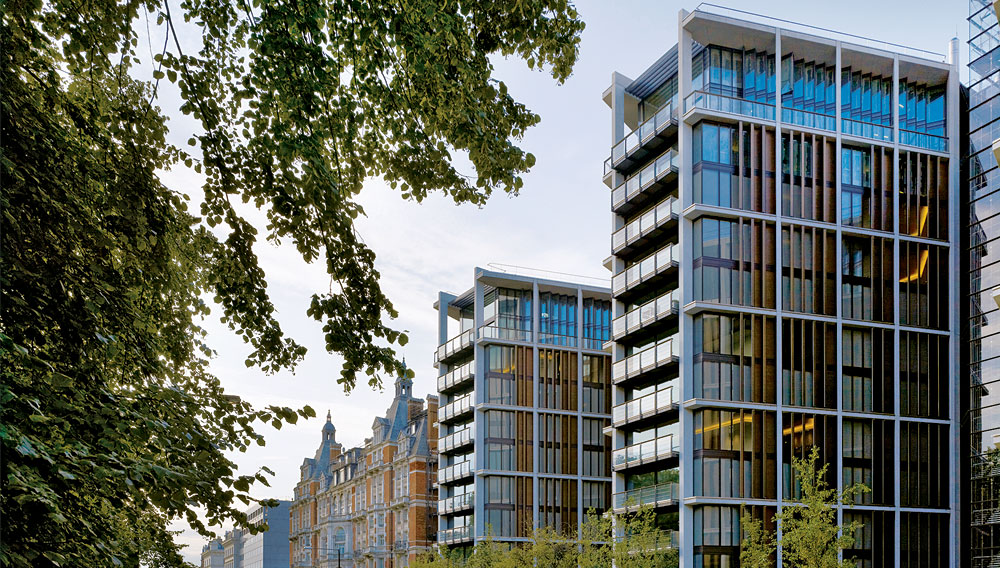 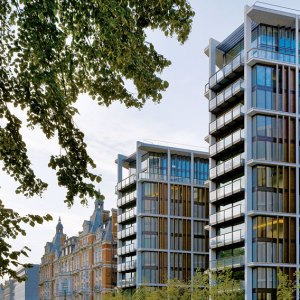 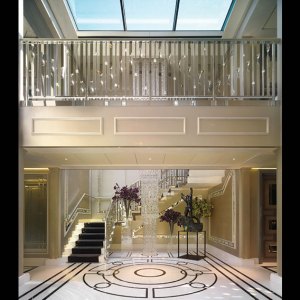 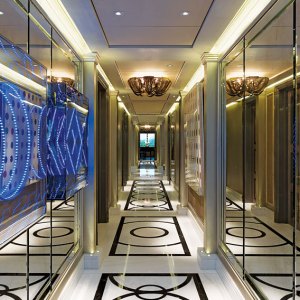 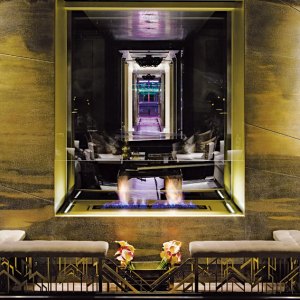 Despite its conspicuous 2-acre site overlooking both Hyde Park and Knightsbridge in the heart of London, One Hyde Park has remained a mystery ever since construction was completed in 2011. The Richard Rogers–designed steel-and-glass building claims 86 units, some of which set world records when they sold for £7,500 per square foot ($12,000 or more). Still, what lies beyond its triple-glazed windows—which tower serenely above the neighborhood’s predominantly Victorian rooftops—has remained scrupulously shielded from the prying eyes of the curious, including the press. Only now are the doors of what has been described as the world’s most exclusive and enigmatic address thrown open to Robb Report readers, as we begin this year’s Ultimate Home tour.

One of the four-pavilion building’s most impressive units, this 18,000-square-foot penthouse—which occupies the 10th and 11th floors—is owned by an international businessman and his wife, who commissioned Candy & Candy to design the interiors. The firm owned by Nick Candy was involved in creating One Hyde Park’s public spaces as well as a handful of other units within the structure, which was developed jointly by Nick’s brother Christian Candy’s CPC Group and Waterknights, a private company belonging to a former prime minister of Qatar.

“When the homeowners came to us, the unit was entirely raw space, an empty box, with views over Royal Park and Knightsbridge,” says Richard Share, Candy & Candy’s global projects director. “Nothing can ever be built in front of it, and it has all of the amenities and services from the neighboring Mandarin Oriental hotel [including 24-hour room service, housekeeping, valet, and a hotel-trained staff of 80 on-site 24 hours a day], which is something that has never existed before in London. It’s a truly one-of-a-kind residence and the ultimate acquisition for the homeowners.”

What the couple acquired, however, was in effect the ultimate blank canvas. Devising a plan for the interiors proved a considerable task. To facilitate that process, Share used masking tape to outline the various spaces on the floor, enabling the owners to physically walk through his plan. “The homeowners knew they wanted to see both the city and park at the same time,” he says. Thus, as guests enter the foyer (first spread, right), they encounter sweeping views of bustling Knightsbridge on the right and, to the left, verdant vistas of Hyde Park, along with a polished-nickel staircase created in Denmark; a hand-polished floor from Carrara, Italy, made of Rhino White and Noir Saint Laurent marble; Auguste Rodin’s sculpture The Prodigal Son; and a double-height, 20-foot-tall Swarovski crystal chandelier made with 4-inch-by-1.5-inch crystals (the largest the company makes). A 165-foot-long hallway (previous pages, left), which transects the residence’s lower level, features Tunnel View Down Under, an installation by Hans Kotter. A variety of rooms open off of this passageway, including the kitchen, dining room, media room, guest bedroom, and offices for both owners. At the Knightsbridge end of the corridor, Share placed an informal game room with a billiard table, a bar, and a drum set from Odery covered in Swarovski crystals, while at the other end, the formal living area—whose two-sided fireplace (previous pages, right) frames the hallway in the distance—looks out to Hyde Park.

Most of the home’s entertaining takes place in the living areas and dining room (above). “We broke up the living room into a series of smaller spaces,” says Share. “To one side of the piano, there’s a bar area and games table, and on the other is an informal reception area [pictured on pages 102–103], so that guests can gather with a drink before dinner.” On the other side of a metal-paneled wall, a more formal living room (previous pages) offers additional seating and a view of the park. Though a neutral palette dominates the decor, never before has beige been so bold. “I like everything to have a wow factor to it,” says Share. “If you’re going to see the side of a chair, then it has to look great. It can’t be run of the mill. That doesn’t mean it has to be flashy or emblazoned with crystals, but it has to be stylish.”

Accordingly, textures and patterns are layered dramatically. The sides of the sofa in the formal living room, for example, have a laser-etched pattern that lends an almost futuristic, three-dimensional effect, and lampshades feature a subtle leaf pattern. The coffee table combines Tabu veneer with satin-brass trims, high-gloss lacquer, and leather and suede lining, while silk-and-wool carpets with starburst and geometric motifs cover the chevron-patterned wood floor.

Just off the living areas, the dining room melds the formality of a Michelin three-star restaurant with the whimsical air of Lewis Carroll’s Wonderland. The entire room is covered in dark-blue verre églomisé, and the dining chairs, though all upholstered in the same fabric, represent four different styles. This slightly surreal setting is accentuated by a painting by René Magritte, which is perched on an easel in one corner—but one specimen from an art collection that contains works by such artists as Claude Monet, Pierre-Auguste Renoir, Pablo Picasso, Damien Hirst, Tracey Emin, Lorenzo Quinn, and Dale Chihuly. “There’s a display case that can be opened to show goblets from a Saudi palace and giant Venini glass capsules that add color and an element of playfulness,” says Share. “And on the other side, you can press a button, and there’s a hidden room [previous pages, left] where you can have a glass of wine or smoke a cigar. It’s fun. Everyone from children to adults loves it.”

The decision to endow the 2,592-square-foot master suite (previous pages) with views of the park required sacrificing some square footage—the space over the formal living room—given that room’s soaring height. “Most people might not have wanted to do with less square footage, but having a bedroom that overlooks the park, while still maintaining the luxury of 18-foot-high ceilings in the living room is a rarity,” says Share. For privacy, the bedroom’s glass walls can be concealed with integrated blinds or blackout drapes.

The suite’s sleeping area has a built-in refrigerator and coffee machine near the bed, a suede-covered wall, and a skylight with integrated blinds. Elsewhere, his and her closets (above left) mirror one other, as do the bathrooms. Her side (above right) boasts Nero Marquina marble floors, Statuario marble walls, a Jacuzzi tub, and Lalique taps. A Swarovski chandelier designed by Eva Menz hovers over the tub. In the vanity area, stainless-steel-lined drawers are temperature controlled: Some are kept cool for storing beauty products, and others serve as towel warmers. On his side (top), the same marbles are used but in a reversed pattern, and the bath is placed adjacent to a wall that conceals a television. The shower features chromotherapy lights and body jets.

Although residents of One Hyde Park have access to the building’s communal gym and stainless-steel ozone-treated pool (not to mention the pool and gym facilities at the neighboring Mandarin Oriental, which were recently redesigned by Adam Tihany), the homeowners elected to incorporate a private gym (right) with views of Knightsbridge into their penthouse. A durable and functional rubberized floor that has the appearance of washed oak assimilates the space aesthetically into the rest of the home, though certain sections of the floor were reinforced with actual wood in order to carry the weight of the gym equipment.

Additional recreational spaces include the intimate media room (above), whose custom velvet-clad seats recline to form a bed that faces the 103-inch Panasonic plasma TV. “There’s an 18-seat home theater in the building,” notes Share, “so this room is for when you just want a more casual experience and don’t want to have to dim the lights, turn on a projector, and make it an event. It’s one touch and on.” The 17 other televisions installed throughout the residence enable the homeowners to follow the news, check the international stock markets, or watch sports events wherever they happen to be.

A nail salon, a glass-tiled steam room, a sauna lined with hemlock wood, an experience shower with 12 body jets, and a massage room with two beds let the busy couple enjoy all the amenities of a top day spa without leaving their home. “Again, there’s a private spa facility in the building, but the homeowners wanted a space that was just for them,” says Share. “They have the added benefit of bringing in the therapists from the Mandarin Oriental, so it’s easy to use [on the] spur of the moment, even for things like acupuncture and facials.”

At the owners’ request, Share modeled this spa on the Dior Institut at the Plaza Athénée in Paris. “Our firm is always traveling,” he says, “and we look for inspiration everywhere. For this, I was inspired by what I had seen in Paris, and then took it up a level.” The walls and ceiling of the massage room (above) are covered in silver leaf and illuminated by fiber-optic lighting. In the nail salon (right), custom chairs crafted for comfort and style face the view. In the steam room (top right), a glass-tile mosaic and amethyst geodes add color and conceal the steam outlets. A pyrite-crystal formation at the spa’s entrance acts as sculpture. “It looks a bit like kryptonite,” observes Share. “It’s not something you see often.”

Outdoor area | Billiard Room: Out and About

Thanks to London’s frequently inclement weather, outdoor areas are not generally a priority for the city’s residents. The penthouse, however, offers 1,781 square feet of exterior space, all of which is artfully integrated into the home. “You can easily host 15 to 20 people on the terraces, but it’s more for casual lounging than formal entertaining,” Share says. “Since the weather doesn’t permit frequent use, we made sure they were not overly complex but still fitted with the same level of customized furnishings that you would find inside.”

The centerpiece of the game room, which opens to the Knightsbridge-facing terrace that the homeowners use for informal gatherings, is a pool table appointed with Zebrano timber veneer, ebonized-walnut timber, suede play surfaces, and silver chalk holders. Above the table hangs a dichroic light from Haberdashery that changes colors as players move around it. “It might sound like a large penthouse for just one couple,” says Share, “but each space was created with such detail and designed for such a range of functions that there’s not a part of the home that goes unused.”