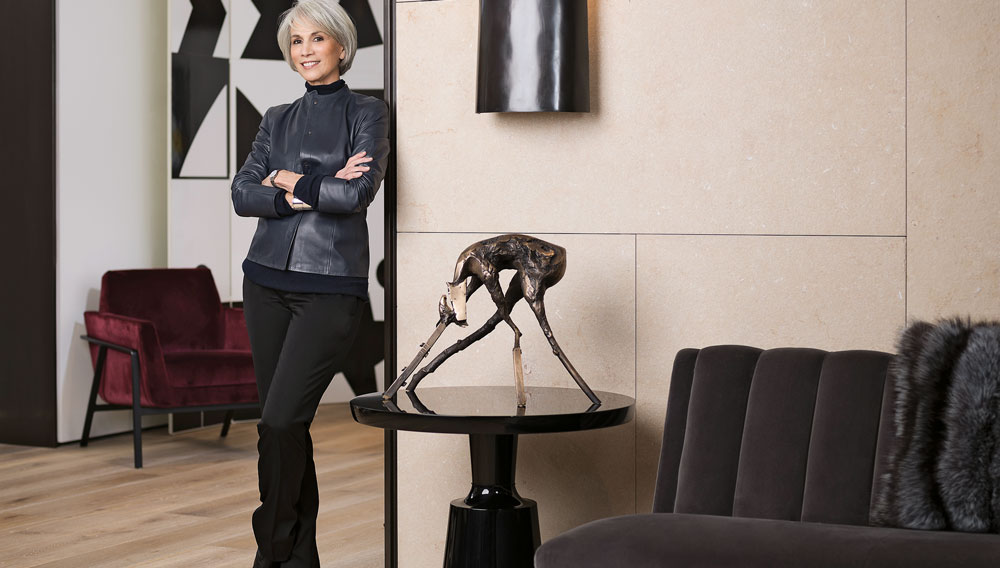 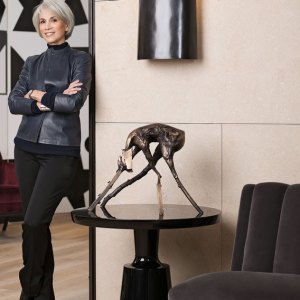 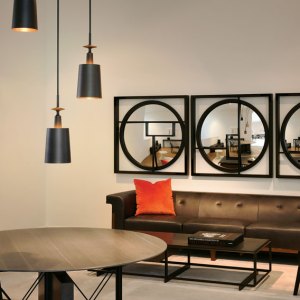 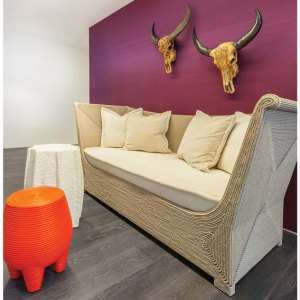 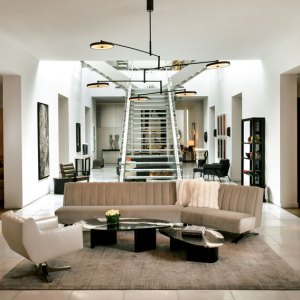 After 30-plus years at the top of the design universe, Holly Hunt and her namesake brand need no introduction. But she has plenty of news to share.

Step inside a Holly Hunt showroom in search of an exceptional cocktail table or bookcase, and the sense of uniqueness is immediate. Each of the brand’s 11 locations—from the original in Chicago, to the two in New York, to the outposts in Miami, Minneapolis, Los Angeles, Dallas, Washington, D.C., London, and São Paulo, Brazil, to the most recent addition in Houston—is different, each is inviting, and each is exemplary. “I think we do more with our spaces than anybody else. Why should they be alike? That’s boring. We do whatever the space calls for,” says Holly Hunt, founder of the Chicago-based design and furniture company that bears her name. “The space tells you what it wants to be, and what it can be,” she says. “It reveals itself. I have to almost feel it as it goes up, feel it as it comes alive.”

Hunt’s showrooms are peerless; just ask her peers. She points out that when House & Garden was still published in the United States and the magazine asked American interior designers to vote on the best showroom, hers won the award three times.

A main aspect of her strength, her showrooms give a glimpse of what it takes to predominate in the realm of high-end furniture and interior design for more than 30 years. Hunt unquestionably has a knack for spotting talent, having championed the designs of Los Angeles’s Rose Tarlow and the French modernist Christian Liaigre, but talent-spotting alone would not have enabled her to scale the heights she has reached. Nor would simply offering and producing excellent high-end furniture have been sufficient to win the day. Stopping at that point is like painting a canvas and giving no thought to the frame, or how it might be displayed, or who will live with it day in and day out.

Taking a holistic approach is key, which is why Hunt’s devotion to ensuring that a showroom is fundamentally right is vital to her success and her longevity. “The details of the interior of a space are just as important as the furniture that goes in it. Even if you don’t look at the detail, you feel it,” she says. “A showroom may be beautiful, but if it doesn’t feel good, nobody wants to be there. I want to create a space that people love to be in.”

No doubt she is aiming for precisely that result with the additional commercial and residential commissions she is now overseeing—projects that may cause many more to be enamored of her work.

Odd as it might seem, Hunt did not grow up expecting to create spaces that people love to be in. Raised in West Texas, the budding designer liked fashion (she sewed every now and again) and enjoyed feeding her curiosity about the world, two traits that would serve her well throughout her life. After graduating with a liberal arts degree from Texas Tech in 1965, she entered an executive training program at Foley’s in Houston, which belonged to Federated Department Stores (today known as Macy’s). She found the experience more enlightening than any traditional graduate school she could have attended. She likes to joke about earning her “MBF,” or Master of Business, Federated. “I don’t think those training programs exist in the same way today; you learned from the basement all the way to the top,” she says. “If you really want to run a business, I think you need to know what goes on, and how it works. I chose to learn every single working part. It was invaluable to me in starting a business from scratch.”

The path that led her to purchase R.J. Randolph in Chicago’s Merchandise Mart in 1983 was neither straightforward nor preordained. “Everybody thinks I had a big hairy plan. I didn’t have any of that,” Hunt says. “I had three sons, ages four to eight. I knew I was getting a divorce. I needed a desk and a telephone. I needed a job.” She debuted in Chicago because that was where her young family was based, and that was where a struggling showroom happened to be. She bought it not because she had a multimillion-dollar eponymous interior design empire in mind, but because “it seemed to fit with what I knew how to do.”

About that multimillion-dollar empire: Hunt did not lend her name to her venture right away. In fact, she hesitated for roughly a year before formally committing to the moniker in 1984. “I think I was insecure about it,” she says. “It seemed self-aggrandizing.” She made the leap after others encouraged her to call it Holly Hunt. “It’s my maiden name,” she says. “It’s worked out really well.”

A Holly Hunt–branded line of furniture, lighting, rugs, textiles, and accessories was not part of any specific plan either. When she began running the Chicago showroom, she operated it in the manner of an art gallery, simply representing the designers’ pieces on display. That changed in the early 1990s, when she “decided it would be more fun if I made things.”

Two early pieces by Hunt, the D’Orsay cocktail table and the Paris chandelier, set the tone for her line for years (and are still available). Subsequent pieces in the series took general stylistic cues from that table and chandelier, both of which she deems transitional, neither explicitly traditional nor modern. Avoiding overt modernism was a respectful concession: She had agreed to produce Christian Liaigre’s work not long after launching her own line, and his pieces bore that look.

Having her own line in place proved immensely helpful when Liaigre departed from her company’s lineup in 2011. His leaving did not come as a bolt from the blue: She was aware of Liaigre’s interest in ending their agreement before it happened, she says. Some industry-watchers became doomsayers when the Liaigre news broke, but they were not seeing the whole picture. Hunt was now free to roam creatively and unveil new, modern designs that were distinctly hers. “It took the lid off,” she says of his exit. “We built 100 prototypes and brought 70 of them to market.”

One marquee product from the post-Liaigre era is Hunt’s Shadow dining table, which gains its stunningly slender profile from the use of cut and polished aluminum. “I wanted to do something very thin, and you can’t do that with wood,” she says. “Metal gives it a different look. It’s more modern.” A piece of aeronautical-grade steel incorporated into the tabletop keeps its center from bowing. Another enduring brand favorite, the Siren dining side chair, debuted in the middle of the last decade. With 200 to 300 orders placed annually, it remains the line’s best-selling chair.

Far from destroying her brand, as some feared it might, Liaigre’s departure paved the way, Hunt says, for her company’s sale last year to the East Greenfield, Pa., design company Knoll, whose furniture lines include those of another leading female designer, the firm’s now-retired former head, Florence Knoll. The $95 million deal allows Hunt to retain her six-person design team, her CEO title, and her Chicago headquarters, and she estimates that as much as 75 percent of the retail business consists of items for which she oversees and controls the manufacturing. “I would never have been able to sell to Knoll if I didn’t own the designs I was making,” Hunt says. Of her parting with Liaigre, she reflects, “It worked out really well for me. I hope it worked out well for him.”

Despite suffering a twinge of remorse after selling her company—“I got over it,” she says—Hunt seems happy with her choice: “They’re not trying to change what we do,” she says of Knoll. “They want us to do [it] better, and do more of it.”

She remains busy at Holly Hunt, and she is also overseeing various projects, including the Little Nell resort in Aspen, Colo., and L’Atelier Miami Beach, a luxury residential development in the Florida city. Renderings of the Hunt-designed lobby at L’Atelier show a 16-foot-high space with marble floors, darker marble on the walls, and a constellation of lights on the ceiling. “It’s important for the experience of entering the building to set the tone of the building,” she says. “I wanted it to be kind of monumental, but I didn’t want it to be overdressed.”

Work on the Little Nell, her first hospitality project, continues. Last year, she focused on the VIP suites; in 2016, she will refurbish rooms she originally did eight years ago; and beyond that, she anticipates addressing the hotel’s entrance. “I’m going to put more color in it, period,” she says. “It will not be at maximum intensity. Faded is the best way to say it. I want blue, but I don’t want it in your face.” Wall coverings will appear as well. “They’ve come back strong in the last two or three years,” she says. “I like them. They give texture to the room.”

She is even finding time to take on select residential clients. Before she purchased her first showroom, she practiced on herself, as Hunt describes it, designing the interiors of the homes and offices she shared with her now ex-husband. She started accepting outside residential offers about six years ago, after adding an architect and a design director to her staff freed her to consider such things; even then, she says, “I’d only [take] them if they came highly recommended or are friends of mine.” She is handling three residential commissions now, and they share the same design fundamentals as her celebrated showrooms. “Like my showrooms are site-specific, [the homes] have to be site- and client-specific.”

Hunt also unveils updates and additions to the Holly Hunt furniture and lighting series twice yearly. An outdoor furniture collection, which favors materials such as aluminum and stainless steel, will appear next year. She is getting away from teak in part because it seems almost everyone who offers outdoor furnishings uses it. “I don’t want it to look like anybody else’s,” she says of the forthcoming collection.

That focus on uniqueness undoubtedly has contributed to her longevity. And much of her staying power, by her reckoning, stems from mastering the basics. “You’ve got to have the best quality, the best presentation, and the best designs, all the way through. It’s common sense, but not a lot of people do it,” she says. She also keeps an eye on the spring and fall fashion collections to help her stay ahead of furniture trends, which she estimates turn over after five years or so. “Fashion is very experimental. People are willing to take risks and experiment with it. That’s good. [But] it doesn’t happen in furniture, in part because you want it to last longer.”

Creating lasting designs, outlasting expectations—this is the Holly Hunt way. “Be curious, be a sponge, learn about everything—it all goes into what you’re doing,” she says. “Be interested in many, many things. It all feeds your talent later. You’ve got to read, you’ve got to know what’s going on in your world. You’ve got to be interested in stuff and in people and why they do what they do.”