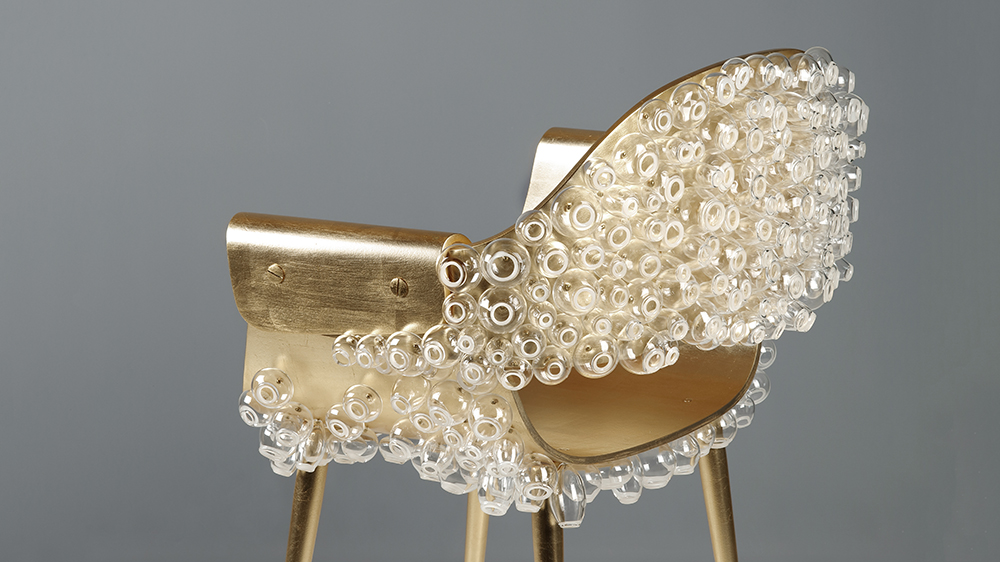 When Bernd Goeckler gallery tasked two designers—Simone Crestani, a glassblower, and Roberto Rida, a metalworker—with creating a collection together, the duo were given just one rule: Make at least two mirrors.

“I told them this because a mirror isn’t just a usable thing,” says gallery director Katja Hirche. “It’s something that could replace a piece of art and still add dimension to a space.” The Hubble Bubble and the Scarabei mirrors—adorned with glass orbs and colorful scarabs, respectively—serve, like the rest of the Duetto collection, as both functional furnishing and statement artwork.

Hirche paired Rida and Crestani because she felt each would complement the other’s material expertise. The two share a fascination with shapes found in nature, spurring works such as the Hamami Coffee Table, a twisting glass tree within a transparent box, and the Scarabeo container, which, like the Scarabei mirror, renders the scarab beetle—a favorite of Crestani’s—in elegant glass.

Crestani and Rida’s “Avatar” chandelier, named for the 2009 film.  Courtesy of Bernd Goeckler

But for the collection to work, each piece must retain its function, no matter how avant-garde the final shape. Take the Ursula Chair: At first glance its preponderance of glass orbs, reminiscent of octopus eggs and running along the back and underside, seems like a living- room nightmare. But Crestani’s glasswork is sturdy borosilicate, strong enough to withstand day-to-day bumps and bruises; it fosters a motif of fragility throughout Duetto without the threat of actual breakage.

“To do good collectible design, the idea is important, but so is the execution,” Crestani says. “Craftsmanship is something that we must preserve.”