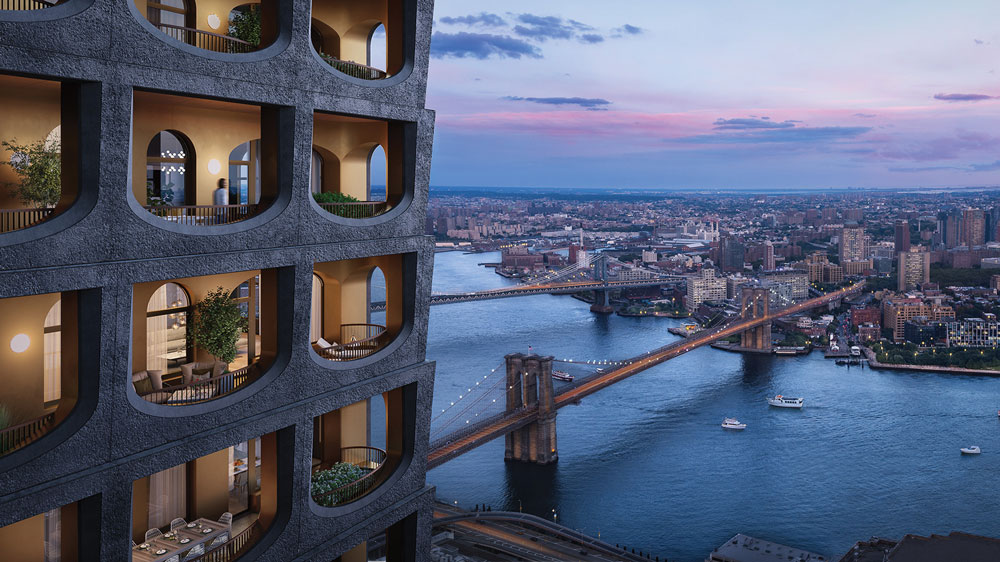 If there is real estate karma, it smiles favorably on New York. No other city has the audacity, the adrenaline, or the double-dog-dare-you moxie to scoff at spatial constraints, city codes, architectural improbability, or list prices and turn out spectacular buildings that redefine how we want to live. While there isn’t a shortage of exceptional properties in New York, only one has the distinction of being designed by Sir David Adjaye. That project, 130 William, is a new 66-story, 244-unit luxury condominium skyscraper in lower Manhattan set to open in 2020.

If his name seems familiar, it’s because Adjaye is in a rare class of architects. Recently knighted by Queen Elizabeth II, he is internationally noted not only for his prolific creations—museums, institutions, design products, and developments that favor the soulful over the stylistic—but also his resonant cultural impact. An Adjaye building doesn’t scream, but it doesn’t hide, either. It captivates, like a book that is both thought-provoking and a best seller.

This is the first luxury residential condominium tower in New York for Adjaye Associates. It is a collaboration with real estate developer Lightstone and executive architect Hill West Architects, and the project is already living up to its mythology: sales for the residences, which include studios (starting a just under $1 million) to five-bedroom homes, are nearly underway.

While the lifestyle and wellness amenities are considerable—a swimming pool, plunge pools, a health club, a yoga studio, a basketball court, lounges, a chef’s catering kitchen, a private IMAX theater, and a rooftop observatory deck nearly 800 feet in the air—the project says more about the New York Adjaye wants to explore. “I saw 130 William as an opportunity to make a meaningful contribution to New York’s urban fabric, both to its ground plane and its iconic skyline,” he reveals. “It was important to me that the design could operate within both of those contexts. So there is an entry plaza that is very much a piece of placemaking, one intended to enhance the public realm.

The choice of a concrete façade, meanwhile, hearkens back to the masonry of Manhattan’s earliest skyscrapers, intentionally contrasting with the prevailing glass constructions to establish a distinctive presence. Some of the most exciting elements of the design are loggias on the top levels, which were really about celebrating the verticality of the building and opening up unprecedented views of the city.”