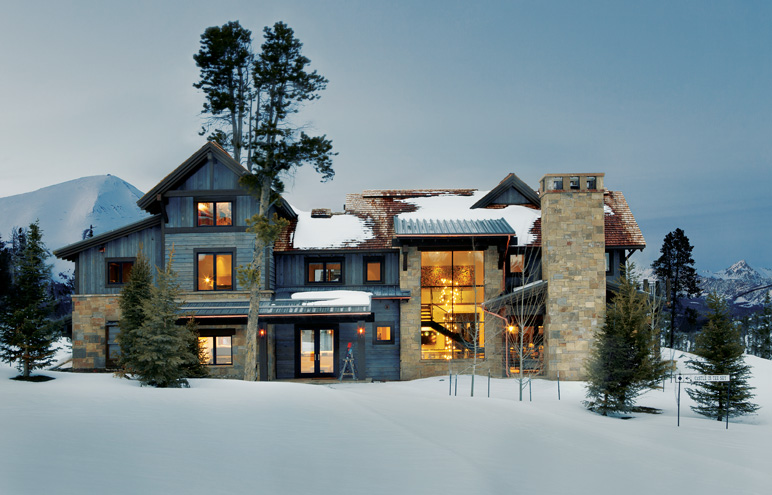 All that’s rugged is refined at this sophisticated family retreat in Big Sky.

Understandably, Cori Bates emphasizes the setting when sharing details of her family’s recently completed vacation home in the Rocky Mountains. The residence, which she owns with her tech-executive husband, Tony, stands amid Yellowstone Club’s 13,600 pristine acres in Big Sky, Mont. “Nature is the best therapy,” says Bates, noting the low-key, family-oriented lifestyle that the private resort community affords. “It’s the perfect place for our kids,” she says of their four sons, ages 7 to 17. “It’s a private club of only about 500 members, so it’s very safe. And the boys are active, out all day instead of being on their iPads.”

The home had to adhere to the community’s architectural standards, including the use of locally sourced stone, new and reclaimed fir, and a standing-seam zinc roof. “The clients, however, wanted to blend rustic features with more modern elements,” says project architect Corey Kelly, of Locati Architects in Bozeman, Mont., who worked with principal Jerry Locati to open up the structure by deploying massive modern steel windows in public spaces. Inside, the Los Angeles–based designer James Magni and his namesake firm’s senior designer, Jeremy Graef, created a neutral yet richly contemporary palette as a backdrop for the panorama. “With that view,” says Magni, “it would have been silly to overdecorate.”