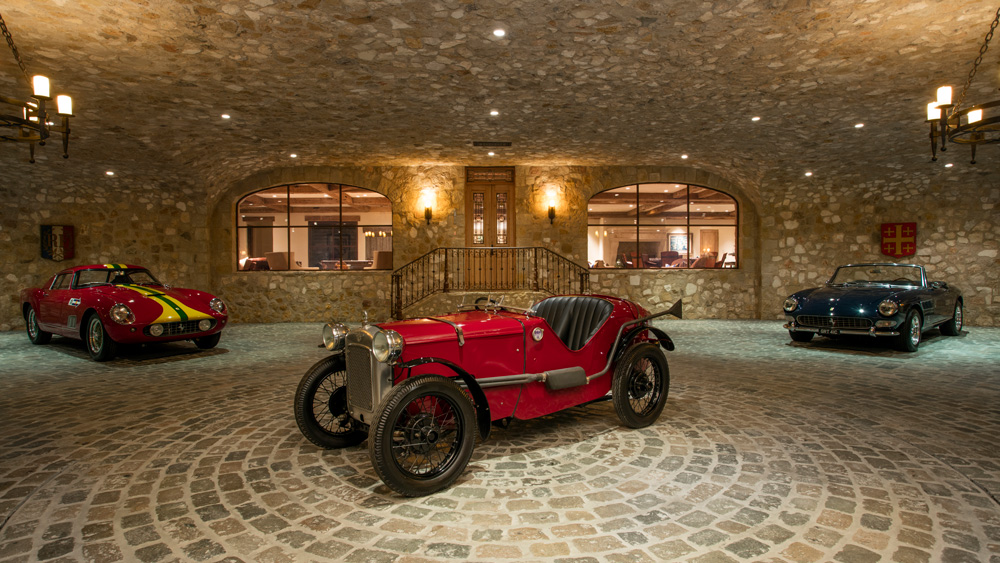 Every collector experiences an acquisition high; it is a primal thrill that overrides price tags and shipping logistics. It wears off, though, when you realize that your collection needs a suitable home. Car enthusiasts know this feeling well—and it’s rivaled only by people who collect yachts.

The joy of being a specialty car owner is only enhanced by the best garages. Designer and builder Rob Glass has raised the bar in this particular arena. His passionate, car-collecting client in Newport Beach requested a unique space to enjoy a rare selection of Ferraris and other vintage models. Instead of a slick, muscular hot-rod showcase, Glass created an atmospheric and sophisticated sanctuary inspired by 17th-century caves in Gordes, France. The chunky stone cellars, arched doorways, and cavernous wineries in the region played a big part, as the designer imported Croute stone from Burgundy and thousands of stone pavers from the streets of Belgium to give the space its ultra-textured European bona fides.

The 3,600-square-foot lounge and garage space doesn’t rely on illusion—Glass even had period-appropriate, hand-forged iron chandeliers from Paul Ferrante commissioned for the space. The designer, who is the coprincipal and third-generation steward of his family’s firm, Glass Residential Group, is known for exacting, historically informed estates that balance patrician style with architectural heft. But it’s not all Provençal-style rusticity and vows of silence in this subterranean domain. Glass had some serious tech built into the space—namely, an 18-foot-diameter electric “turntable” platform created to give easier access to the cars. However, the real triumph might be how an enviable collection of 20th-century gems—like a 1930s Austin Seven Ulster and 1965 Aston Martin DB5—looks so good in the private, low-lit 17th-century French cavern in Newport Beach.