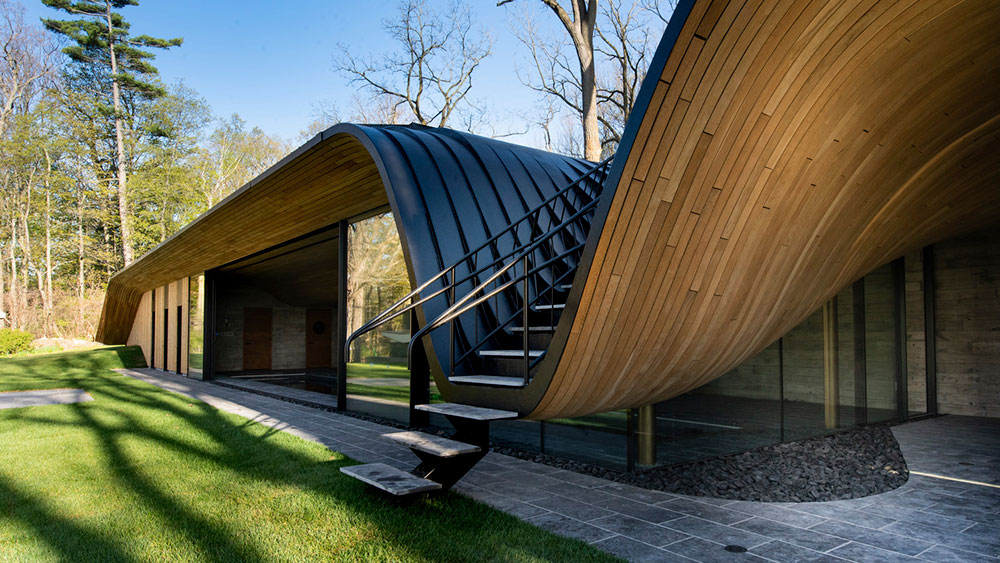 When a fire broke out in entrepreneur Scott Friedmann’s Ontario home in 2017, he and his family were forced to evacuate. The damage was enough to warrant a full rebuild, which, as a sort of silver lining, gave Friedmann the opportunity to experiment anew with the estate, which sits behind a stone wall and is dotted with 200-year-old oak trees. He opted to go the more unconventional route, tapping Toronto-based firm Partisans to design a 4,473-square-foot space that seems to fold into the hillside.

In order to make sure the design fit the landscape just right, Partisans used 3-D scanning technology to visualize it before starting the build out. The vision was to create a unique pool house (on the left side of the home if you’re facing it) with long, sliding glass doors and white-oak ceilings. On the opposite side of the home’s big curve is an outdoor pavilion that leads into the main residence.

A closer look at the outdoor staircase, which leads up to the garden roof.  Photo: Partisans

The roof is meant to further blur the line between architecture and landscape. It’s full of gardens, accessible via the steel staircase that’s built within the curve itself. Creating this twisty façade required Partisans to dig into its toolbox a bit, as getting a roof to bend that much without breaking requires a special technique. They borrowed a method that bends timber via compression, used for making furniture and musical instruments and rarely done on such a large scale as this project.

The pool house. The three-bedroom, four-bathroom main residence houses the family of five. It’s become their ideal lockdown pad, as Friedmann, the executive chairman and co-founder of New Skew, a branding and recipe development company for food and beverage businesses, often uses it as a lab for culinary experiments. There’s a vegetable garden on the property as well as beehives, and the family has started raising heirloom chickens there. Naturally, the kitchen was expanded as part of the major reno—it now doubles as a workshop where Friedmann can craft and discuss new recipes.

It’s a pretty prime example of design not getting in the way of nature, even if that design requires some extra effort to install.

Want a closer look at the Fold House? Check it out below: