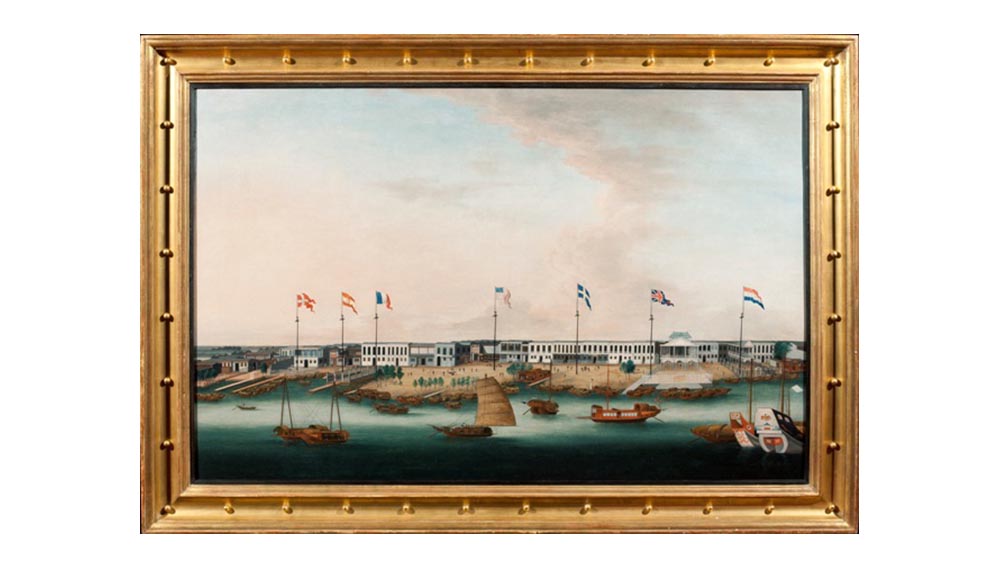 The world’s foremost expert in Chinese Export paintings, The Martyn Gregory Gallery of London, will exhibit 70 of these paintings (also known as China Coast or China Trade paintings), from January 21-31, 2016, at Mallett, 929 Madison Avenue (at 74th Street), Third Floor, in New York City. An exhibitor since 1990 at the annual Winter Antiques Show in New York, this new show, entitled China Observed, will be the gallery’s first independent exhibition in the city. These highly detailed works by Cantonese artists were bought by ships’ officers and merchants who came to trade at Canton (modern Guangzhou) in the 18th and early 19th centuries. Also on view will be paintings by Western artists who travelled to the East.

“New York has been one of the principal centers of the China Trade ever since America won its independence from Britain,” commented Martyn Gregory, “and the city still contains a wealth of China Trade pictures and keen collectors. We have always enjoyed coming to New York, and we look forward to meeting old friends and new enthusiasts in our new venue. We are bringing with us the finest collection of China Trade paintings to be found on the market at the present time, and perhaps for the foreseeable future.”

Among the most spectacular of the paintings by Chinese artists who dominate China Observed are detailed scenes of the ports visited by the Westerners: notably Canton, Hong Kong and Shanghai. One such example is The Hongs of Canton by an unknown Chinese artist, c. 1804. This oil on canvas (32 x 50 in.) is a large, impressive and finely detailed view of the hongs, or “Factories,” at Canton that commemorates the early years of direct trade between the United States and China. It also records a brief period when seven different nations (Great Britain, America, France, Sweden, Denmark, the Netherlands and Spain) were all actively trading at Canton, the only Chinese port at which Western trade was permitted.

Another large and unusually well-painted harbor painting is Hong Kong from the Harbour by an unknown Chinese artist, late 1850s (oil on canvas, 26 x 44 in.). Here, the island of Hong Kong is pictured before the erection of the signaling station on the Peak in 1861. Less than 20 years had elapsed since the British hoisted the Union Jack on the shore of Hong Kong Island, but in the intervening period, most of the waterfront between Western District and East Point had been developed. Several well-known structures are included in the landscape, including the tower of St. John’s Cathedral, which can be seen above the smaller paddlesteamer, with Government House uphill to its right. In the harbor, a great variety of vessels can be seen, including a coastal junk, Tanka boats operated by blue-robed women, covered hulks (superannuated sailing ships converted for use as naval base), small sidewheelers and three-masted sailing ships flying the flags of Britain, France and the United States. A curiosity of the painting is the presence, towards the right of the harbor, of a junk-rigged vessel with additional jib and topsails in the Western fashion.

Yet another painting, A Panoramic View of the Bund at Shanghai, with a Regatta in Progress, an oil on canvas (16¾ x 55¾ in.) by an unknown Chinese artist (1849-51), is apparently the earliest detailed view of the Shanghai Bund. The picture, which is known in several versions, would have been executed no earlier than July 1849, when the British consulate was first established on this site (far right) and 1851, by which time Jardine, Matheson had replaced the Chinese-roofed building seen here (to the left of the British consulate) by a larger structure with a Western-style roof.

Also to be seen in China Observed will be remarkable Chinese export portraits of Western visitors to China and painted ‘in the Western manner.’ Portrait of William Read of Philadelphia by the Cantonese artist known as Spoilum (fl. c.1774-c. 1805), an oil on canvas (24 x 20 in.) is an outstanding example of this artist’s distinctive work. The sitter, William Read (1767-1846), made several voyages to China. His father, George Read, was one of the signers of the Declaration of Independence.

Trampling Down Loose Tea in Tea Chests at Canton, a gouache by a late 18th-century unknown Chinese artist (12½ x 10 in.; 31.7 x 25.4 cm.) is another highlight of China Observed. This painting is one of a set of eight scenes illustrating the production of tea from the earliest stages—picking tea in the mountains—to the late stage seen here, in which dark-suited Westerners sample the tea as animated Chinese figures press down the tea within the chests in which it will be exported to the West.

An unusual and early pair of suave Chinese women holding long tobacco pipes—one shown with a dog and the other with a green-eyed cat—are also included in the exhibition. A Pair of Paintings of Chinese Women accompanied by Pipes and Pets by a late eighteenth-century Chinese artist (gouache on paper, each 31½ x 23¼ in.; 80 x 59 cm) depicts in each scene a woman beside a latticework shutter, as if at a window, with flowering shrubs and birds beyond. Each woman wears a fur-lined robe and flower-bedecked headdress and holds up a long tobacco pipe. One woman is accompanied by a small dog, the other by a green-eyed cat; both are placed within painted trompe-l’oeil frames of differing design. These unusual pictures are precursors perhaps of the more standardized “beauties,” painted in oils, which were exported in the mid-nineteenth century.

Martyn Gregory, the proprietor for whom the gallery is named, has been an art dealer for more than 50 years. In 1977 the gallery held its first exhibition relating to the China Trade (Catalogue 18) following the discovery of an album containing over one hundred works relating to China at the time of the Second Opium War. It was from this beginning that the gallery developed its interest in the ever-intriguing subject of the China Trade and in the many artistic connections between China and the West.  In addition to Mr. Gregory, Dr. Patrick Conner is a director of the gallery. He is a historian and lecturer and former Keeper of Fine Art at the Royal Pavilion in Brighton; he is also the author of the definite work on the legendary artist of the China Coast, George Chinnery and more recently a book on the ‘Hongs of Canton,’ a study of the pictorial icons of the China Trade and the merchants who traded there.

The Martyn Gregory Gallery sells works that are often both historically significant and highly decorative. At least once a year, the gallery produces illustrated and scholarly catalogues on this area of specialty. For over 40 years it has been located at 34 Bury Street, St James’s in the West End of London. Telephone: 44 (0) 20 7839 3731; fax: 44 (0) 20 7930 0812; website: www.martyngregory.com.