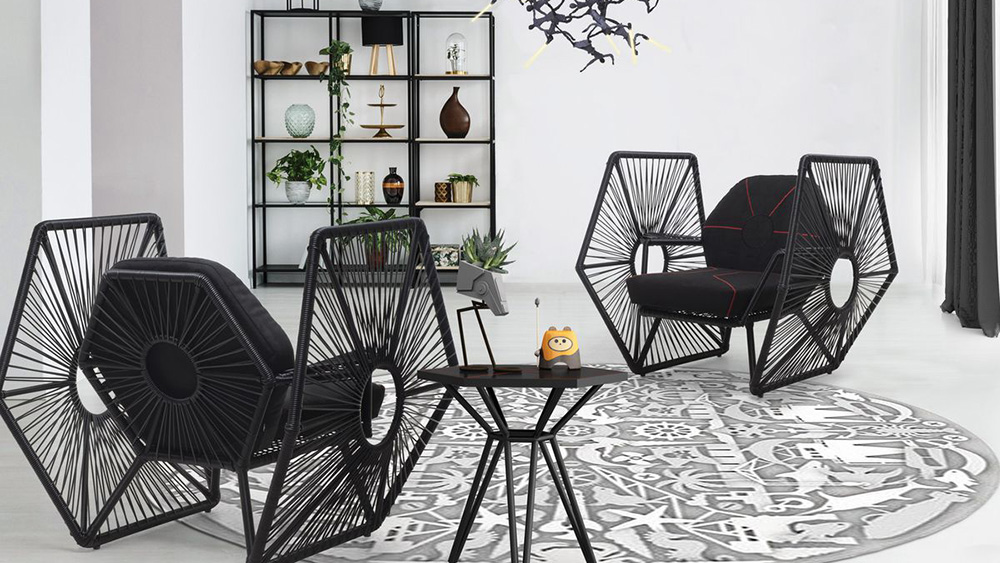 When it comes to Star Wars merchandise, the force has always been very strong. Lunch boxes and bobbleheads pushed the total sales of licensed products to $262 billion in 2016. Since then, the franchise has grown exponentially—even accruing its own amusement park—and now it wants to venture into your home.

Disney has teamed up with Filipino design maven Kenneth Cobonpue to launch a Star Wars-themed furniture line—and, as Yoda would say, very good, the furniture is. But contrary to the kitsch creations your inner-child may envision—no, there are no wookiee-like shag pile rugs—the high-end collection is suitably refined and thoughtful.

The delicate-looking Vader and TIE fighter armchairs incorporate handwoven, airy lattice—a feature consistent within Cobonpue’s oeuvre—and prove the dark side can be incredibly chic. Other standout pieces include an upscale homage to Chewie—a wookie ‘rocking stool’ complete with his signature brown “fur” and ammo belt—and an intricate Jedi lamp featuring plenty of lightsabers (thankfully, not of the plastic toy variety).

Initially, Cobonpue had some reservations about the project. “At first, I said, you don’t need me for this because I don’t make replicas of machines, and Star Wars fans will only buy something if there’s the face of Darth Vader on it—I don’t do that,” he told the Philippine Star last October. “They said, ‘No, no, no. We want you to interpret through the lens of a Filipino designer.'”

And interpret he has. Cobonpue segued from the literal for a more abstract representation of the famed fantasy world. The benefits are two-fold: He can appeal to Star Wars fans of all generations and levels—from the Dad who knows every line to the Gen Z who doesn’t know who Harrison Ford is—while creating contemporary pieces which will withstand the test of time.

The collection, which was previously only available in the Philippines, has finally made it stateside and can be purchased in various showrooms across the country. The pieces range between $655 for a TIE Fighter Wings end table to more than $4,000 for the Dark Lord’s armchair. May the shopping force be with you.