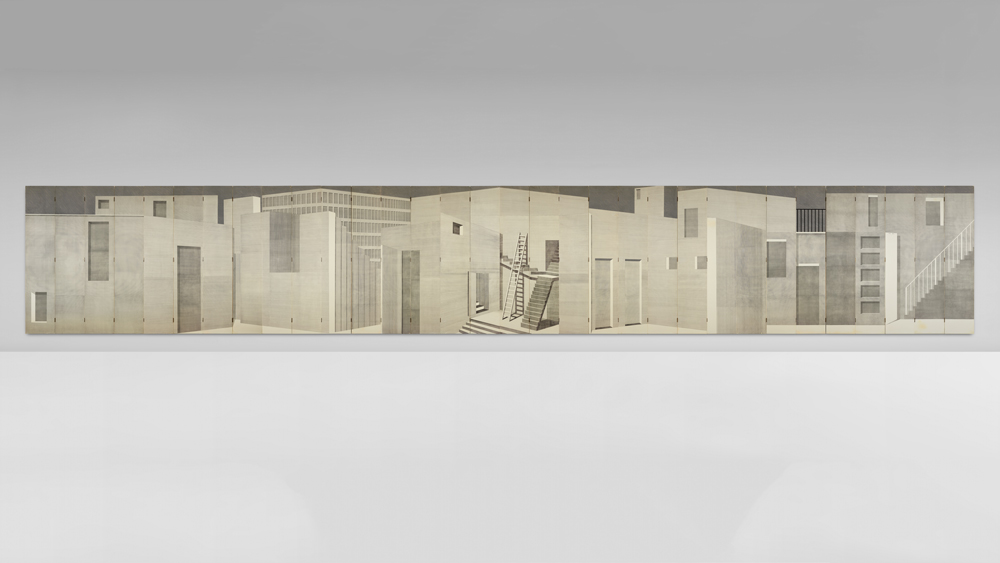 Fans of Milanese designer Piero Fornasetti know his dramatic, captivating imagery with many of his fanciful works featuring the visage of fin de siècle opera sensation Lina Cavalieri whose photograph he spied in a French magazine in 1951. The Italian designer’s surrealistic style was a sensation by the 1960s, gracing everything from plates to furniture. But not everyone has been lucky enough to procure the late designer’s most important and iconic works. British musician Sting and his wife, actress and film director Trudie Styler are among the fortunate few. Fornasetti’s large scale work, La Stanza Metafisica (The Metaphysical Room) belonged to the couple and will be a major highlight of the design sale at Phillips in New York on June 6.

The auction house will offer some 15 prime pieces from Sting and Styler’s collection with La Stanza getting most of the (well-deserved) attention. The unique 32-panel folding screen from 1958, which is nearly 53 feet in length, bears a black and white architectural motif, evocative of the work of M.C. Escher. “The acquisition of La Stanza Metafisica by Sting and Trudie a decade ago was serendipitous given the space I had designed for them in their New York apartment, which overlooked Central Park on one side and offered a stunning view toward the Hudson River on the other,” says noted architect and designer Lee F. Mindel. “There,” he says, “the screen’s 32 panels were allowed to stretch uninterrupted along a 75-foot windowless party wall that ran the entire length of the apartment, connecting Central Park to the river and creating a third view into a surreal world.”

“The way Lee Mindel displayed the screen, it truly added a fourth dimension to what is a marvelous space,” says Alexander Payne, deputy chairman for Europe and worldwide head of design for Phillips who was instrumental in scoring the consignment for the house.

Piero Fornasetti’s Illuminated “Libri” trumeau, a design collaboration with Gio Ponti from the 1950s and reissued by the artist’s son Barnaba Fornasetti in 2012, carries an estimate of $15,000 to $20,000. It is among the consignments from the collection of Sting and Trudie Styler hitting the block at Phillips in New York on June 6.  Photo: Courtesy Phillips

Other works from the Sting and Styler’s collection are more modestly priced, including Fornasetti’s illuminated Libri trumeau, an early collaboration with Gio Ponti from the 1950s that was reissued in 2012 by the artist’s son Barnaba Fornasetti. It carries an estimate of $15,000 to $20,000. Also of note are Kerstin Hörlin-Holmquist’s Garden of Eden daybed from her “Paradise” series (est. $10,000 to $15,000) and Angelo Lelii’s 12 arm “Stella” ceiling light, which heads to the block with an estimate of $18,000 to $24,000.