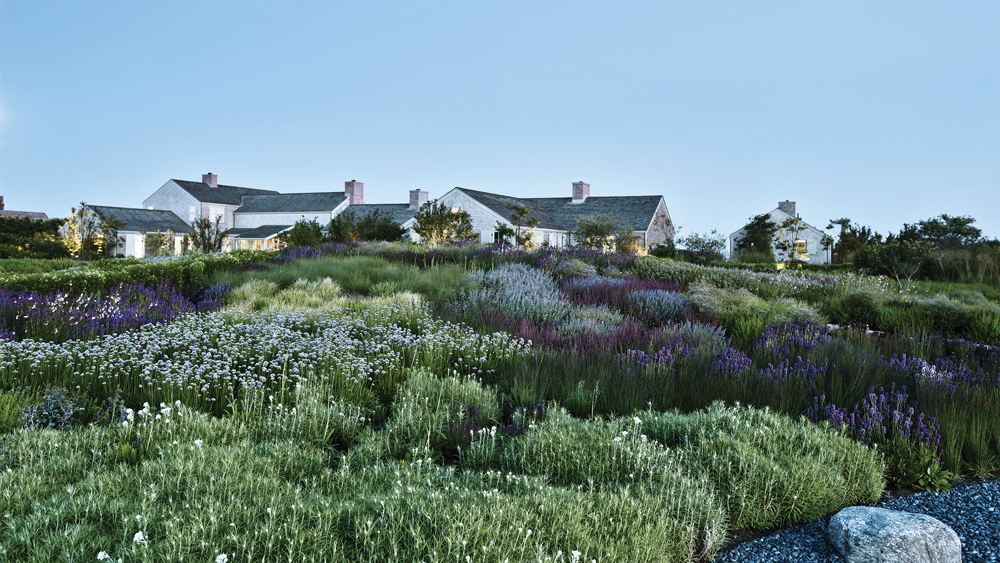 Nantucket, located south of Cape Cod, has long been valued for its quaint cedar-shake cottages and cobblestoned main streets. However, as the island has grown in population, it has evolved to become a haven of both sophistication and repose. In summer, Nantucket lures sailors, families, and gourmands, but in the off-season, it assumes an alluring, austere beauty. The family compound showcased here, designed by Studio Liaigre, pulls all of those elements together with a laid-back, littoral elegance that embraces the organic modernism for which the great French design house is so well known.

The owners who vacation here already had links to Liaigre, which designed their Toronto home. According to Studio Liaigre’s creative director, Frauke Meyer, who heads the interior-design studio, when the family purchased this sprawling ocean-side property on Nantucket many years ago “there was just one house used by the family for holidays over the years that was gradually updated as the family grew.” They decided to revamp from the ground up, so they called in Studio Liaigre, which collaborated with a local architectural office on the 3.5-year project to remain in compliance with the island’s many design and historic-​preservation guidelines.

“Our approach in general, of course, depends on the client,” says Meyer. “But the environment and context are also very inspiring for us. A house on Nantucket, with its view of the sea and its historical background, has to have a modest architecture that does not have a big impact on the land.” This led to what appears to be a cluster of five white-trimmed, cedar-shake fisherman’s shacks encircling the two-story main home. Because the clients entertain large numbers of family and friends each year, continues Meyer, “They needed a kitchen where everybody could congregate and a very big dining table. But they also wanted to make sure everyone was made comfortable and maintained their independence.”

The main structure fulfills the first half of the family’s requirements. Upstairs are the master bedroom, dressing room, and bath, and downstairs is the compound’s only kitchen, as well as a 1,600-plus-square-foot great room with two seating areas, two fireplaces, and the essential long dining table. The five adjacent structures accommodate five more bedrooms (one a bunk room for younger vacationers) and baths.

“In accordance with historical-preservation regulations, the architecture, such as the shingle facade and the size of the windows, remains in perfect harmony with the surroundings,” observes Meyer. These buildings, she points out, are set amidst a landscape of native plantings designed by the influential Dutch landscape architect Piet Oudolf, a proponent of using massed beds of perennials and grasses. He was also responsible for the flora schemes of New York’s renowned High Line.

The interiors are a testament to the evolution of another family—that of Liaigre itself. The rooms relate seamlessly and with complete coherence, exuding the firm’s distinctive aesthetic without a trace of the company’s own recent transitions and changes. Christian Liaigre, who stepped down as head of the firm a year and a half ago, was the original creative lead on the Nantucket project. As far back as 2014, he had designated Meyer and his wife, Déborah Comte-Liaigre, as co-creative directors. While Comte-Liaigre serves as the firm’s managing director, Meyer—who has been at Liaigre for 18 years and spear­heads design as well as creative and interior-​architecture projects—assumed responsibilities for the Nantucket compound. “We are keeping the same spirit, intention, and way of working,” says Meyer. “I try to make sure we stay on the same path.”

Certainly the compound provides ample evidence that it remains in sync with the Liaigre look. It features voluminous and angular forms as well as furnishings that showcase pure woods arranged almost sculpturally but without pretention throughout uncluttered rooms. Pattern is nearly entirely absent, and materials—fine leathers, linens, and woods—are naturally luxurious. The overall impression is one of serene elegance—at once comfortable, soothing, and stylish.

“The design studio’s choice of noble materials is of the utmost importance and goes into reflecting the spirit of the place,” says Meyer. “Cedar shingles and sandblasted and brushed wood evoke driftwood washed ashore. The durable linens impart a feeling of pureness and comfort. The floors are painted white and feature a beach-washed finish that fades in time with light and sea air. The natural essence of these materials represents purity and sophistication.”

One possible exception to the familiar Liaigre vibe is the strategic deployment of bright colors—namely red and yellow. One enters the main home’s great room, for instance, through a portal of French doors framed in a vivid red. These colors are not arbitrary, bound inextricably as they are to locale. “Red and yellow were inspired by the lifestyle of the local fishermen,” says Meyer, referring to the easy-to-spot buoys that mark the locations of lobster traps or hold sections of fishing nets close to the water’s surface. But they equally relate to the desires of the owners, who, Meyer notes, “wanted to have something more free, unafraid, and joyful to contrast with all the white.” This formula informed every color choice—deep blue (for the sea) in one bedroom, a green chair (for bioluminescent underwater organisms) in another, and so on.

Also congruent with the ethos of Liaigre is a wealth of custom work, right down to the hardware, which was meant to obliquely refer to fishermen’s hooks and implements. “All our furniture is initially designed for projects, so it has a soul related to the context of a project,” says Meyer. “Each piece has a story.”

In the end, a narrative linking past and present to the future is what this compound evokes. “It looks like these houses have always been here,” says Meyer, “as if they came together almost by chance.” Of course, chance in this case is entirely by design.