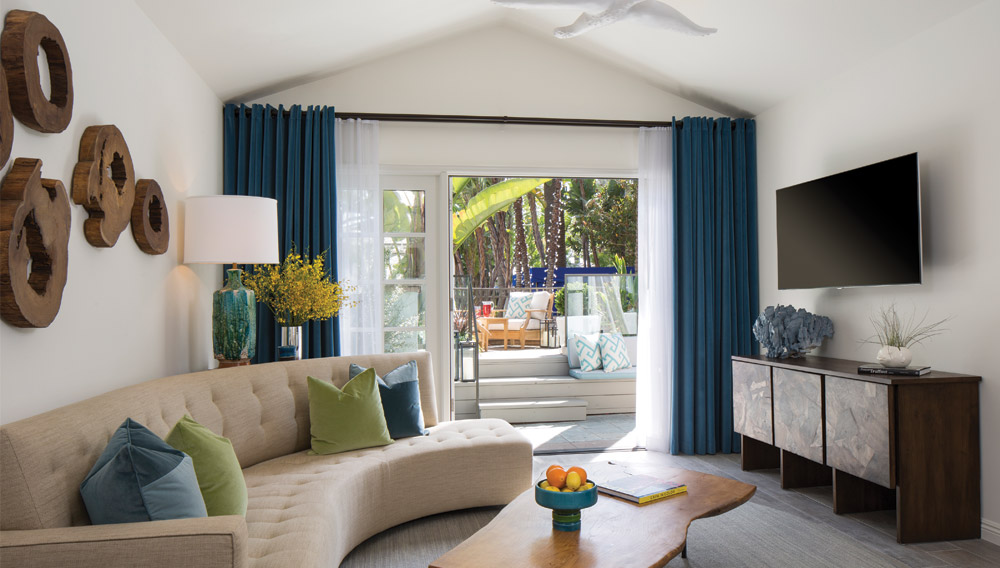 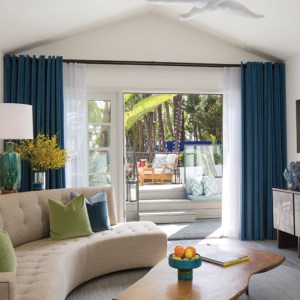 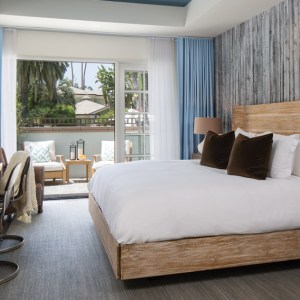 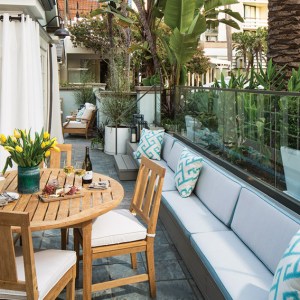 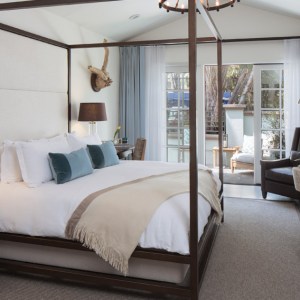 The new Bungalow One by Robb Report Home & Style at the Fairmont Miramar Hotel ditches formality in favor of a restrained take on the VIP retreat.

The arresting view inside the recently unveiled Bungalow One by Robb Report Home & Style at the Fairmont Miramar hotel owes, in part, to what is not there: no ornate drapery, no high-gloss dining table for 12, no gilt-framed oil paintings. Rather than include such trappings, the Los Angeles–based interior designer Michael Berman—who was tasked with converting four of the Santa Monica, Calif., property’s bungalows into one presidential suite in collaboration with the Fairmont Miramar and Home & Style—took a low-key tack with the high-end lodging’s design.

“I wanted this to be more like staying in a personal guest home of a really great beach house,” says Berman of the comfortably appointed bungalow, where the nightly rate starts at $4,000. “Yes, I wanted it to feel luxurious, but not necessarily formal or opulent. This is Santa Monica, not Los Angeles, so things are a little more relaxed. But I get that this is an anomaly in terms of what you’d typically expect from a presidential suite.”

If his treatment of the accommodation is unique, it is in keeping with the Fairmont’s history as a one-of-a-kind coastal hideaway for high-profile guests. Thirty-two bungalows scattered throughout the 4.5-acre property perched above Santa Monica Bay were built in the 1930s and 1940s and have housed such luminaries as Marilyn Monroe, Eleanor Roosevelt, and Charles Lindbergh. Today, the 10-story Ocean Tower, built in the 1950s, anchors the hotel (owned since 2006 by the computer tycoon Michael Dell), while the bungalows remain in demand for their homelike ambience amid the poolside bustle.

Bungalow One, however, stands apart from the other cottages for one attribute in particular: space. The unit’s indoor and outdoor areas total 2,500 square feet, which is more than twice the size of any other suite at the hotel. To imbue the larger dwelling with a feeling of home and style, Berman had to contend with the extant architecture. “One of the major challenges here was to provide a sense of flow to what was essentially a linear row of four suites,” says Berman, whose own furniture designs appear in the bungalow and in other hotels, such as the Peninsula Beverly Hills, Wynn Las Vegas, and various Four Seasons properties.

Though major construction was not an option, Berman was able to create a core living room and sleeping quarters within the building’s rectangular layout using the center two rooms as the main design event. “The center rooms include a living area and the master suite, which are soft and opulent but in a casual way,” says Berman. (Some of the wall between the living area and the master suite was taken down, to connect the spaces via double doors.) Both stay within a similar palette of dove gray, charcoal, blues, and whites, with punches of greens—not exactly warm and cozy tones, but the designer purposefully chose cooler colors to interact with the sunlight. “Everything gets so warmed up in here by the sun,” he explains. “The clear, cool palette plays off of that.”

Flanking the bungalow’s central core are two additional bedrooms, whose colors and textures Berman intentionally dialed down. “The adjoining rooms are deliberately underdone,” he says. “I wanted them to be minimal, uncluttered, and have a quiet simplicity that allows the eyes to rest. What connects all of these rooms is a use of organic materials and various nods to classic, midcentury design. To me, it’s all about barefoot elegance.”

This aesthetic permeates the bungalow thanks to Berman’s choice of decor: a thoughtful mix of new and vintage items, original art, and one-off accessories. “A lot of the items used aren’t even necessarily ‘hotel proof.’ They’re the kind of materials I’d use for high-end home design,” he says, noting that the elongated and curved sofa he conceived for the living area is “made for kicking off your shoes and having a martini.” A pair of hand-cast, oversize seagull pendant lights, also designed by Berman, hover in the master bedroom and the living area and signify his desire to “channel beach style without getting into over-the-top surf-decor clichés. I didn’t want that feeling where you walk in and it’s all whitewashed surfaces and seashells everywhere.” (His general restraint means he gets away with the bubble vase full of seashells that rests on a circular table in the living room.)

Key to creating this subtle coastal vibe was the artwork: Berman selected vintage black-and-white photographs (not shown) taken in Santa Monica. One oversize image features the California Incline, the sloped road that connects Ocean Avenue (the Fairmont’s cross street at Wilshire Boulevard) with the Pacific Coast Highway; another is a shot of bodybuilders at the original Muscle Beach, just south of the Santa Monica pier. “These photos capture the essence of this area unlike anything else,” says Berman. “And they’re not in the public domain, so they’ll be new to people who stay here, whether they’re from Santa Monica or another part of the world.”

Guests at Bungalow One are also certain to appreciate the suite’s technological conveniences and creature comforts. The designer melded his informal interior design scheme with high-end equipment, including four 55-inch Samsung smart TVs and several wireless speakers, which are placed throughout the dwelling. A guest using the master suite can program the Rohl thermostatic valve to provide his or her preferred bath or shower water temperature, and, with the click of a switch on the wall, cause the window between the master bedroom and the bathroom to go from transparent to opaque. But perhaps the accommodation’s most crucial elements are its beds. “This is hands down the most important thing in any hotel room,” says Berman, who specified handmade, all-natural mattresses from the British company Vi-Spring for the sleeping quarters. “If you’re not going to have a restful night’s sleep,” he says, “nothing else matters.”

Staying at Bungalow One by Robb Report Home & Style

SETTING: The spacious suite (1,800 square feet inside, 700 square feet outside) is located near the pool at the 4.5-acre, ocean-view Fairmont Miramar hotel in Santa Monica, Calif.

SLEEPING: The bedrooms—a master suite and two guest rooms, each with its own bathroom—have beds covered in Scandia down linens. Designer Michael Berman created shelves on the nightstands to hold the extra pillows, so that “you don’t end up throwing them on the floor like in so many hotels rooms.”

DIVERSIONS: Spa treatments or a private dinner for as many as 10 people can be enjoyed on the suite’s patio.