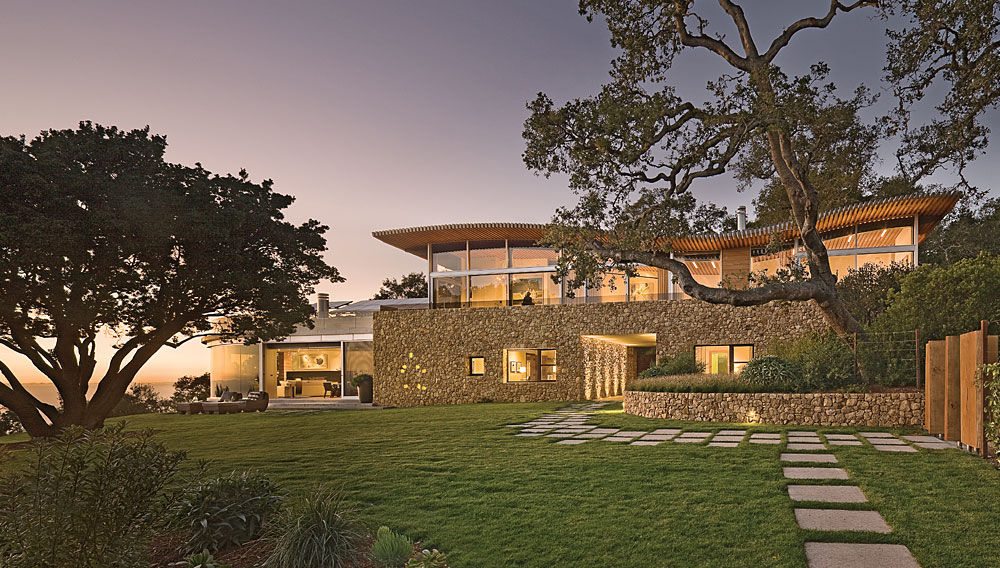 The stunning, sparsely populated Big Sur coast attracts those seeking the most leisurely of California lifestyles—no exception the retired business executive and his wife who four years ago acquired this two-and-a-half-acre stretch 1,000 feet above the Pacific. “My husband and I had been visiting [Big Sur’s] Ventana Inn every year for 18 years and had fallen in love with the area’s natural beauty and low-key way of life,” says the wife. “We knew we’d love to settle down here one day.” One day became a reality late last year, with the conclusion of a three-year process that included the construction of a main house and the renovation of two extant houses (one of which was previously owned and designed by the late architect Philip Johnson) on the property.

The nearly 5,300-square-foot main house—shown here and on the following pages—has its width, rather than its length, facing the sea. “Most people [in Big Sur] orient their homes so that they face the water entirely; however, all you see is blue,” says Mary Ann Schicketanz of the Carmel, Calif., architecture and design firm Carver + Schicketanz. “These homeowners wanted a more varied view and a large area of land for a lawn.”

Green Acres | Native grasses—and a green sensibility—define the open-plan, two-bedroom main house, which incorporates reclaimed wood and stone that blend with the surroundings. Solar panels on the roof provide most of the structure’s energy needs. The curvilinear roofline evokes the wingspan of the endangered California condor, whose cause the homeowners have taken up by raising funds. The couple also had an archaeologist on-site during construction to ensure no burial grounds were disturbed. “The land used to be home to the Esselen Native Americans,” says the wife. “They used to climb down to the water and gather abalone to eat on this ridge. [The place] has a very tranquil feeling.”

That tranquility extends to the meditation room, located off the second-floor master suite. The pocket doors slide open, eliminating any boundary between inside and out, and two chartreuse Metropolitan chairs from B&B Italia swivel, allowing the sitters to face the ocean or Mark Beck’s painting of a beach house. Jean de Merry’s Sea Urchin chandelier and a bronze sculpture by Enrique Martinez Celaya also decorate the space.

Outside, on the patios, cement lounges with plush cushions allow the homeowners to recline in comfort. From these vantages, the two look out over the tiered grounds to the hot tub and the 600-square-foot exercise studio (top left). The facility is subterranean so as not to interrupt the sight line of green grass, light blue sky, and deep blue sea that Schicketanz likens to an abstract painting.

The Hang Over | The living and dining areas cantilever over the bluff at the home’s west end and open onto the verdant grounds through 16-foot-wide sliding glass doors on the south side. “It’s the first floor, but you feel like you’re floating over the water,” says Schicketanz. The dining space features a midcentury rosewood table by Ico Parisi, Siebe armchairs by Piet Boon, and a custom bronze-and-glass china cabinet. For the living area, Schicketanz chose a forged-steel table from Lyle & Umbach, a Bellaview rug from Tai Ping, and a redesign of Ted Boerner’s Loaf sofa that follows the curvature of the windows behind it. “I love how Mary Ann was able to mix older, vintage pieces with newer, more modern ones,” says the wife. “It’s a minimal space, but the history and character of each piece make it feel warm.” That warmth continues in the kitchen (left), where a blackened-steel-lined alcove in a stone wall houses a stainless-steel range. Two islands give the homeowners plenty of space for making daily meals, while a large pantry on the other side of the alcove stores essentials for catered events.

Sleeping Beauty | “We kept this area structurally and visually light,” says Schicketanz of the master suite, which occupies the home’s entire second story. “The bedroom and bathroom are on the eastern side of the house and get great morning light and a view over the hills.” Many of the suite’s glass walls retract to merge indoors and out, and the Douglas fir–beamed ceiling, custom wood nightstands, and bespoke leather bed complement the surrounding landscape. Above the headboard hangs Enrique Martinez Celaya’s mixed-media depiction of a hummingbird. The wife commissioned the piece, which includes birch leaves and twigs, as an anniversary gift for her husband.

The home’s greatest gift to its owners—harmony with the environment—is apparent in the master bathroom, where a tub carved from a single piece of limestone sits before sliding glass panels that open the space to the outdoors. “The thing I love most about this house is how well it’s connected to the Big Sur landscape, which is one of the most incredible places on earth,” says the wife. “Sometimes I sit in the tub and look out and wonder how we got to be so lucky.”