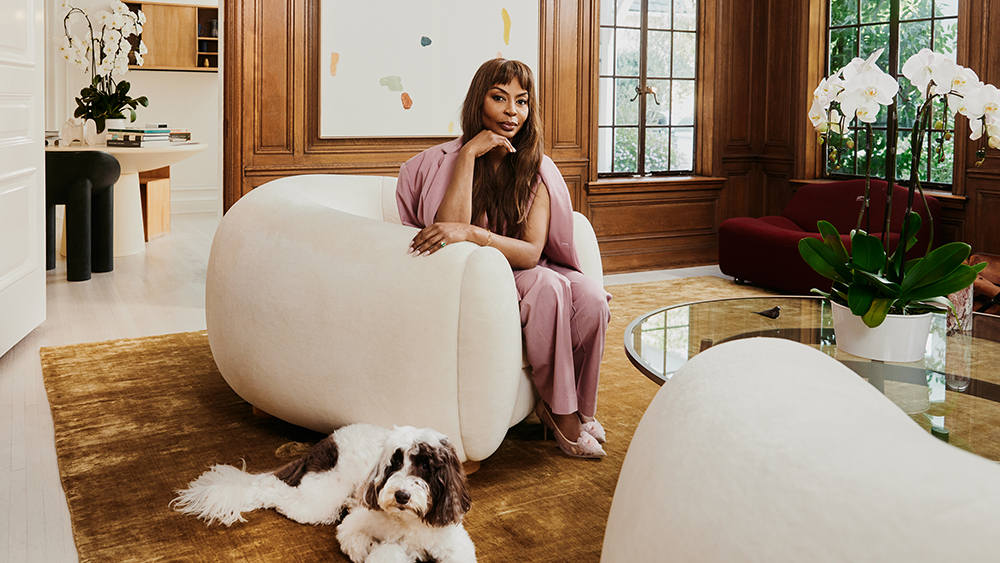 She may have founded her award-winning design practice only in 2018, but over the past four years Brigette Romanek has achieved a list of accolades that would take some a lifetime to accrue. Since setting up shop, the Los Angeles–based interiors maven has applied her aesthetic eye to everything from the Piaget boutique in Beverly Hills to the stylish homes of Beyoncé, Gwyneth Paltrow and Joe Jonas. Each of her spaces is filled with a joyful mix of furnishings, artwork and decorative objects as wide-ranging as her own life story.

Before she came to the design realm, Romanek, 48—the younger daughter of singer-songwriter Paulette McWilliams—scored her own record deal and later created a successful line of handbags stocked at Barneys and Harvey Nichols. (Kate Moss called her directly to place an order.) She landed her first big interiors project when a friend who was enamored of Romanek’s much-referenced Laurel Canyon residence asked for help with her own space—and insisted upon paying the designer for her efforts. A (second) career was born.

Ultimately, Romanek says she’s driven less by a specific aesthetic and more by emotion, which guides her whether she’s working for a family or tackling big projects, such as her recent furniture collaboration with Mitchell Gold + Bob Williams. “My work is being able to figure out what will make people feel good, and that’s hugely important,” she says. “I’m in the business of making people feel joy and feel safe in the world when they close their doors. So I take it very seriously.”

I went to Gstaad. I’m working on a chalet there. I read about it before I went, but you cannot capture it just with words. It’s so, so beautiful.

What’s the first thing you do when you wake in the morning?

I stretch. And don’t laugh: I discovered that from my dogs [Rufus and Roxy]. The first thing they do in the morning is they stretch. So I was like, “You know what? I’m gonna try that.”

I don’t think of it as a ritual, but I love to walk. I think that’s one of the best things you can do—for me anyway, because I can think, have my music or get things done. And it’s a way of exercising without even realizing I’m exercising.

Do you do anything that’s still analog?

I love to take pictures, with a Sony that I’ve had for a while. I have a photographer who captures the rooms, but sometimes there are just these little moments when you can see the composition of something, and it’s really fun to capture that.

I have a lot of jumpsuits. The one I wear all the time is a blue Rivet Utility, but I also have it in a rust color. They’re great for work because they’re still stylish, but they allow me to move around easily if I’m carrying a vase or helping to move a coffee table.

I’m learning to just be. And that’s a struggle, because we’re always trying to get something done… I’m always thinking about how to improve. And sometimes the way to do that is to just be: Be in the element, be conscious, be present. So with that comes the breathing and the walking and the stretching, you know, just being back in your body.

What is your favorite cocktail?

I recently discovered that I like an old-fashioned. I also like a really dirty martini. I’m a real lightweight, and I don’t drink a lot.

What is the most recent thing you’ve added to your collection?

I’m a collector of books. I love a good coffee-table book. When Axel Vervoordt’s books come out, those make me excited.

Who is your dealer, and what do they get for you?

His name is Joel Chen, and he can get anything. He’s one of the best in the business. He recently sold me a ceramic vessel by Jeremy Anderson that I’m absolutely in love with. He had a show at Joel’s gallery, and the pieces were just exquisite. I was lucky enough to procure one. It just makes me really happy.

Joy. I say this—and this is not meant to be a morbid thing; in fact, it’s the exact opposite—but we’re all going to die, right? That’s the one appointment none of us can miss. So when I am feeling bad or sad, I really work hard not to live there. It’s about trying to find the joy more than you find anything else.

What car are you most attached to?

I’ve always liked Range Rovers. I think I had four in a row. I had an emerald-green, glass-top Porsche Targa, but then I got pregnant and the ride got to be a little too bumpy. But another one of my favorites is the Tesla Model S, which I drive now. I love, love, love it.

I have a watch that I love—it’s a Bulgari Serpenti, but I don’t really wear it that much. And it’s not because it’s super valuable. It’s just that I’m moving around so much, and I have so much going on.

About three months ago, in Mexico. We were there for five days, and we stayed at the Four Seasons Punta Mita, and it was just super lovely.

I love the Greenwich in New York. There’s just something so cozy about it.

What is the last piece of advice you gave to somebody?

I have a friend who’s been having a hard time, and I said to them that even through [difficulty], there are things to be learned. And there’s a way to grow from that. Feel what you’re feeling—that’s okay. But don’t live there. You’ve fallen down, and you’ve accepted that you’ve fallen down. But now it’s time to get up and keep moving forward.

My look is really all about eclecticism. It’s all about mixing. It’s all about elegance and being classic, but also having a little bit of whimsy and fun. It doesn’t matter to me what century or decade it’s from—if things look great together, I have at it. There are no rules for me when it comes to design. I do what feels right and feels good.

What sort of music makes you happy?

I love hip-hop. I love some pop, too, R&B. I love all types of music. Honestly, it’s like my interiors. I don’t have one look that I love. If I respond to it, I don’t care what it is.