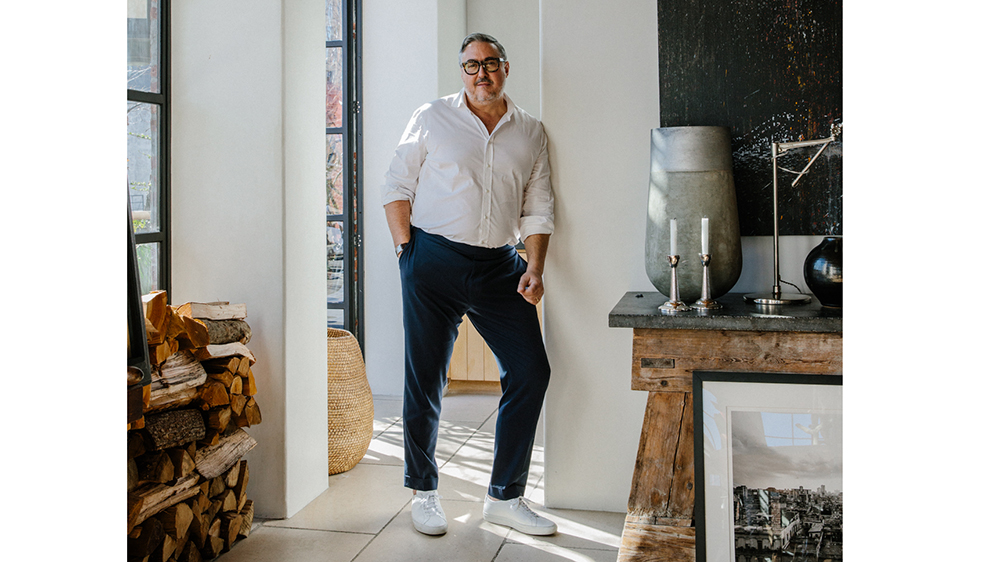 Alfredo Paredes spent over 30 years immersed in the world of Ralph Lauren, where, as chief creative officer, he designed stores around the globe and conceived the renowned Polo Bar in New York City. The interior designer founded his eponymous studio in late 2019. Taking cues from the minimalist work of Axel Vervoordt and the classic elegance of venues such as the Chateau Marmont in Los Angeles, Paredes creates light-filled spaces grounded by chairs and tables made from natural materials such as walnut and oak. His new furniture collection with manufacturer EJ Victor, which includes 33 pieces ranging from sofas to cabinets, brings these sensibilities to an even wider audience. He designed his home in New York’s East Village to resemble an elevated 19th-century artist’s garret. “It’s sort of timeless in its design. You don’t really know when it happened, which I like,” he says. “I don’t particularly love when I walk in a place and I go, ‘Oh, that was 1990.’ ”

Instagram, obviously. I have one for my work and one for my personal. I listen to KCRW on the app. It’s a station out of Los Angeles that’s my favorite in the world.

I still write handwritten thank-you notes, which is really involved because my hand can’t even hold a pen anymore. But I still do it. I think it’s really personal.

To dress up, my favorite is a Ralph Lauren Purple Label gray flannel suit. I have one for winter and one for summer. And the rest of the time, it’s Double RL jeans, Chucks and white T-shirts.

Is there anything that you regret not buying?

What’s the most recent thing you added to your collection?

I recently added a pool with new landscaping to my home out east on Shelter Island.

To go home to my family. Used to be go out and go to dinners and drink… I don’t do that anymore.

Where do you find calm?

The outdoors. I feel like living in Manhattan, getting outside and getting into the outdoors is a great palate cleanser. Somewhere, it doesn’t matter where. Some people want to travel and go to big cities, like, “Let’s go to Paris.” I’ve been to Paris a thousand times. I want to go to Yosemite or the woods of California—Big Sur, the beach, something like that. Open spaces.

I don’t have a song per se. I’m always listening to Chet Baker.

What do you collect?

One of the designer’s favorite vintage photographs.  Laurel Golio

Are you wearing a watch, and how many do you own?

I own so many that I couldn’t even tell you how many. Because of the iPhone, I don’t even wear them. Ralph has given me a lot over the years. I have the IWC Pilot Watch, the Rolex Submariner and the Hermès Cape Cod.

What is your most prized possession?

I received for my 40th birthday, from my partner, a Cartier Tank Américaine. I love it; it’s my favorite. It’s engraved for me.

I tend to gravitate toward surfer slash painter slash war correspondent. That’s what my partner said. I don’t really know what he meant by that. But I like how Picasso dressed, I like how Hemingway dressed, and I like surfer clothes.

What is always in your hand luggage?

My Retrosuperfuture glasses and sunglasses. I have multiple. I bought, like, 20 of the same pair because there’s only one frame I like. They’re all in every bag, every desk.

There’s a place I love in England called Dean Antiques. I buy a lot from my photographer friend Richard Phibbs, and there’s a photography dealer in the West Village called Robin Rice. I used to shop a lot of Paul Rubenstein. I personally buy a lot of stuff for my house on Shelter Island from a place called Beall & Bell out on the North Fork.

Well, obviously my relationship with Ralph Lauren didn’t hurt. He was my guru and still is in a lot of ways, from a creative standpoint.

What is your exercise routine?

I work out three days a week in a private gym with a trainer, and I play tennis on the weekends out on East Hampton, usually two days a week. I play with a pro at the Ross School Tennis Academy.

In my 30s, I took up surfing, and then I gave it up in my 40s, and now I would like to figure it out again. It wasn’t that I wasn’t good at it; it was just hard to get to. Living on Long Island, if there’s good surf, every pro in the world shows up and you’re just kicked to the curb.

Drive. For sure. I have a new Range Rover, I have a Mercedes GLK wagon, and I have a Jeepster Commando 1970. Mostly they’re on Shelter Island.

One hundred percent. It’s everything. I only go by my gut instinct.

What is worth paying for?

What are your regular tables in London, LA and New York?

When I go to London, I love J Sheekey. And I love Gjelina in Venice. I miss it, and I always love going there. And of course, in New York City, the Polo Bar!

My favorite place is Saline Beach in St. Barts. It’s the most beautiful beach in the world.