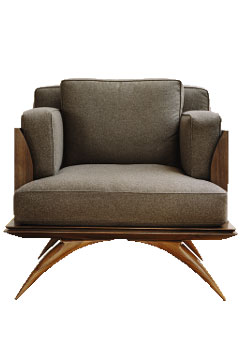 In the 1970s Ralph Pucci took his parents’ mannequin repair business and transformed it into a manufacturer of high-style mannequins that were more fluid sculpture than frozen clotheshorse. Designer Andrée Putman’s contribution, Olympian Goddess, in 1985 proved to be a creative touchstone for the company; Pucci has since collaborated on mannequins with a diverse group that ranges from pop artist Kenny Scharf to fashion designer Anna Sui and model Christy Turlington.

Pucci no longer limits his wares to interpretations of the human form. In his skylit 15,000-square-foot New York showroom he displays furniture from a select group of designers, among them Putman, Chris Lehrecke, Paul Mathieu, and Vladimir Kagan, whose works fall within the loosely defined parameters of Pucci’s aesthetic. “I look for timeless, well-made pieces that are real works of art,” he says. “I’m not looking for something that is mass-produced or funky.” Pucci appreciates the lines of French furniture from the 1930s—many of these designers’ pieces echo Streamline Moderne forms—but the most important factor determining who he represents is arbitrary: “It has to catch my eye,” he says.

Pucci’s involvement in the design and manufacturing process varies. Some designers, such as Lehrecke, enjoy carte blanche and deliver finished pieces without first consulting with Pucci. “He knows what works here,” says Pucci, who becomes more involved with the designs of furniture that he manufactures himself. “As we develop the design, we go back and forth, and select the best approach.”

Pucci does not anticipate adding designers to his already illustrious roster in the near future. “We’re going with the classics,” he says, “people we have worked with over the years.” A show in May featured Putman’s latest designs, for example, and this summer brings a re-edition of her Ecart International collection (which itself re-edits the work of Eileen Gray, Jean-Michel Frank, and Michel Dufet, among others).