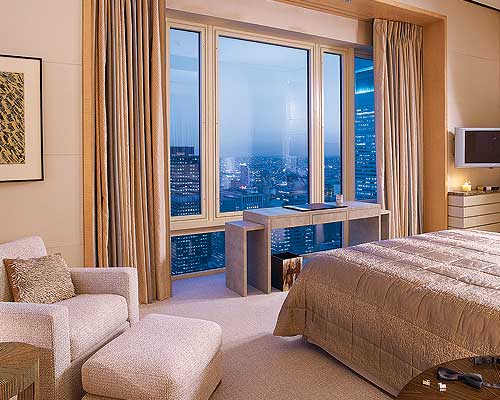 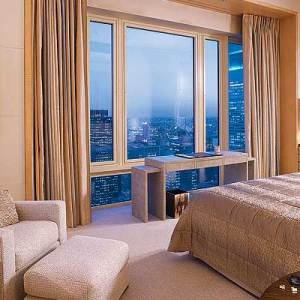 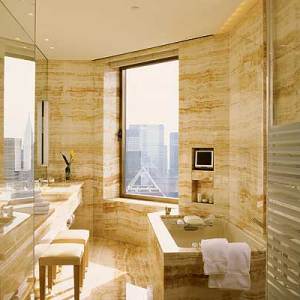 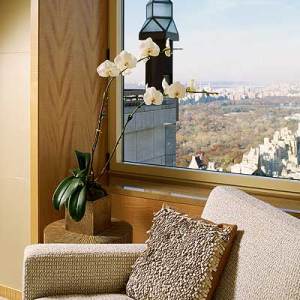 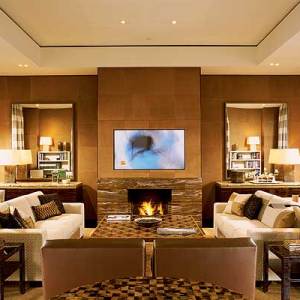 “A little bit of the theater in a hotel doesn’t hurt,” architect I.M. Pei once opined. We presume he was speaking tongue in cheek, as the edifice to which he was referring was his own creation, the Four Seasons New York, which opened in 1993 and which Pei endowed with an abundance of theater. The tallest hotel in New York, rising almost 1,000 feet above 57th Street, it is as dramatic as it is high. Checking in at the Four Seasons—with its cathedral-like French limestone facade, 33-foot-high onyx ceiling over the grand foyer, and outsize Art Deco torchères lighting the stairway to the lobby—takes on a sense of pageantry. It was also the most expensive hotel the city had ever seen, costing some $360 million—about $1 million per room—to build.

Even so, something about his Gotham masterpiece disappointed the distinguished architect: the 51st floor. “I felt this floor was never fully realized,” Pei remarks 11 years later. “It should have been something unique, something spectacular. It was the second-highest floor in the hotel, higher than any other hotel in town, and there were all these remarkable views.” But as the hotel neared completion, the original owner found his funds running short. “He lacked the wherewithal to build what I had in mind,” Pei says with a sigh.

With a change in ownership in 1999, the Four Seasons gained considerably in the “wherewithal” department. The new owner was Ty Warner, who, after parlaying his line of plush Beanie Baby dolls into one of America’s great fortunes, was moving into the upper-tier hospitality industry. In addition to Pei’s landmark hotel, Warner acquired such plum properties as the Four Seasons Biltmore in Santa Barbara and the nearby San Ysidro Ranch. Like the architect, Warner felt compelled to create something unique and memorable on the hotel’s penultimate floor. “I have been in presidential suites all over the world, but I have never seen one with the potential we had on the 51st floor,” Warner says. “I wanted something that would make our guests’ jaws drop when they walked in.”

Money was no object, which was fortunate, for what Warner planned was far beyond a routine face-lift. To begin with, the two suites that occupied the floor would have to be resculpted, reshaped, and redone inside and out. For the exterior, he commissioned the man who had created the hotel and whose enthusiasm for the project matched his own. “This was an exciting opportunity,” says Pei. “I never thought I would get the chance to finish the hotel the way I had always wanted to. Now we could finally top the hotel in a manner befitting its stature in the city.”

First, Pei replaced the traditional horizontal windows with floor-to-ceiling bay windows; the center pane is an uninterrupted 10-foot-high expanse. Warner believes this is an architectural first. “I don’t think anyone had ever used windows this size at this altitude,” he says. “The winds can get pretty strong up here.” Pei, too, thought of the winds when considering Warner’s idea of installing exterior balconies. “Ty wanted to put them on the corners, giving them a diagonal view of the city,” he says. “I wasn’t sure at first; there is a lot of wind out there. But once they were installed, they looked quite good.”

With the exterior taking shape, Warner engaged the flamboyant architect/designer Peter Marino to conceive the suites’ interiors. “To my way of thinking,” says Warner, “Peter has been the premier residential architect in the world for the past 20 years.” Indeed, Marino’s portfolio includes boutiques, offices, and residences for such notables as Giorgio Armani, Chanel Chairman Alain Wertheimer, and LVMH (Louis Vuitton–Moët Hennessy) Chairman Bernard Arnault. “I figured, if he’s good enough for Armani and Chanel, he’s good enough for me,” says Warner.

In one sense, the hotel project was familiar territory for Marino. “I know the people we were targeting for the suites,” he says. “They are my clients. Most of them have three or four homes, a private jet, and they are used to being surrounded by luxury. But they don’t always get that in a hotel. So I wanted to give them an idea of what it would be like if they had their own pied-à-terre in New York. I wanted to make it feel like their home.”

From the outset, Marino embraced Warner’s plan of creating two distinctly different one-bedroom units that guests would want to rent together. “I hate it when you combine two suites and they’re identical,” says Marino. “It makes you feel kind of dorky.” No less bothersome, the designer confides, are those timeworn notions of prestige evident in garden-variety presidential suites. “You see these corny little English country pieces. Or retro. Or Regency. And in London hotels they cover the beds with chintz, as if we’re supposed to love it,” he says. “Well, half the world hates chintz.

What I wanted to do was create a totally custom-made look for the rooms.”

Ultimately, Marino decided on two contrasting themes for the suites. Suite 5101 has the ambience of an opulent, masculine library, with large leather club chairs, walls of embossed leather panels, and parchment bookcases surrounding a hearth of rare Chios marble with rich streaks of toffee and magenta. Suite 5102 evokes the sophisticated feel of a nonstop cocktail party, with cream-colored credenzas and customized games tables, chairs, and fixtures in gilt and lacquer set around a baby grand piano.

The unifying element is the richness that pervades every detail. The floor in the library is silver cerused African wenge; the entertainment center is covered with a slab of semiprecious graphic feldspar. In the bedroom, the ivory-colored walls are paneled and wrapped in Thai silk. The incidental chair in the hallway is a gold leaf chair sculpture by French artist Claude Lalanne.

It is the kind of setting that calls for tarrying over the furnishings and taking in the interplay of textures and color. But all that will come later. First you move, transfixed, to the windows, where you seem to be floating high above Manhattan. Elsewhere in New York, the skyline is a distant vista seen through a corridor of concrete. Here the view of spires and rooftops and sky fills the room. From the library in Suite 5101, your gaze sweeps north, taking in the entirety of Central Park, with the Hudson River to your left and the East River on your right. The living room in Suite 5102 looks south to the Chrysler Building, while the shower offers a view of the Statue of Liberty.

It is, says Warner, a thrill for the senses. “The light is constantly changing and sending different colors through the rooms. It’s beautiful, watching storms out on the Atlantic, seeing the lightning flash out at sea. You’re seeing Manhattan the way nobody else ever sees it,” he says. Unless, he adds, you are in a helicopter. “Sometimes they will hover outside and look in.”

Of course, given that the new suites are higher than any others in New York, so are their rates—$15,000 per day. “These are the most expensive suites in the city,” says Four Seasons General Manager Christoph Schmidinger. “But the rates are not out of line with the most expensive suites at other New York hotels. Only, none of them can offer the unique experience we have here.”

Pei is delighted with the way the suites have turned out. “I have seen a lot of spectacular views, but never through panes as big as these,” he says. “The suites are very special.”

And what exactly should you do in a suite that costs $15,000 a night? Marino offers an assessment: “For me, the hotel experience is 90 percent sleeping, no? I don’t know what else the occupants might do, but I hope they have a good time.”