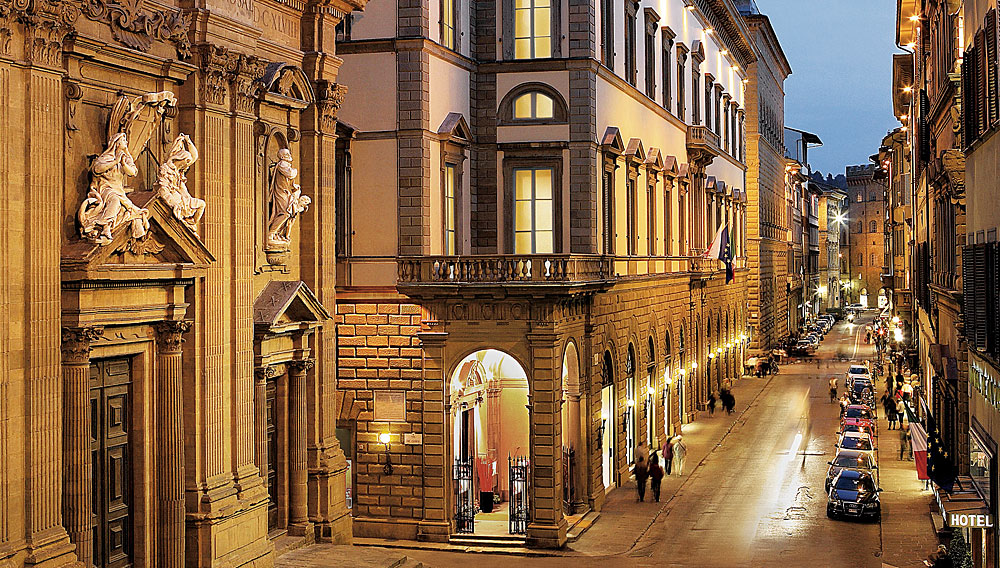 Around 1598, Jacopo Peri debuted Dafne—thought to be the world’s first opera—at the Florence, Italy, home of Jacopo Corsi, a composer and patron of the arts. Today the structure, which sits at the intersection of Via degli Strozzi and Via de’ Tornabuoni in the heart of Florence, is part of the Palazzo Tornabuoni, a Four Seasons–managed private residence club that opened to members in January. The space where Dafne was performed more than 400 years ago is now one of 38 residences—each dramatic in its own right—available for whole or fractional ownership at Tornabuoni.

The palazzo dates to about 1450, when the architect Michelozzo constructed it as a private residence for the Tornabuoni family. Since then the building has changed hands several times. Alessandro Ottaviano de’ Medici, who would become Pope Leo XI, acquired the property in 1574. Then, in the 1590s, Corsi took ownership of the property, which remained in his family for more than three centuries. In 1901, the building became a bank, and it served in that capacity until the Florence-based Fingen Group purchased it in 2004.

“We knew that the quality of the asset was remarkable,” says Jacopo Mazzei, director of Fingen Group’s real estate division, RDM. “But the building’s long and important place in history also meant that turning it into a residential project would require a lot of work.” That work amounted to a five-year renovation, by Florence-based architect and interior designer Michele Bonan, that involved maintaining the architectural integrity of the structure, updating it with modern systems, and restoring its sculptures, frescoes, and other objets d’art.

Palazzo Tornabuoni’s private entrance on Via degli Strozzi (the main entrance is on Via de’ Tornabuoni) leads from the structure’s ground floor to the members’ common spaces on the second floor, including the concierge and reception area, the 1,000-square-foot library, and the terrace.

“The library was inspired by traditional Anglo-American gentlemen’s clubs,” says Bonan, who custom-designed most of Tornabuoni’s furniture and lighting fixtures. “It’s the heart of the palazzo, so it had to transition well from day to night, as well as feel intimate to a small group while still having the capacity to host larger events.” To enhance the hominess of the space, Bonan included a fireplace, which is flanked by French doors that open onto the terrace. Behind the bar, where the club serves coffee and pastries in the morning and wine and cocktails in the evening, a staircase rises to a loft-style smoking lounge.

Members can work out at the health club on the fifth floor, but they also have access to the spa and fitness center—and all of the other facilities—at the nearby Four Seasons Hotel Firenze. Tornabuoni’s ground floor features two restaurants and a gourmet market, which are located at the bottom of the palazzo’s main staircase. And many of the area’s high-end shops—including Bottega Veneta, Bulgari, and Stefano Ricci—are just steps from the two entrances.

All of Tornabuoni’s 38 residences—10 were finished when the club opened in January, and the rest will be done by early 2010—combine contemporary furnishings and a historic environment, and offer spacious bathrooms, Boffi kitchens, and wireless Internet access. However, no two are exactly alike. Some of the suites, such as the ones shown here, feature larger rooms and private outdoor areas.

The Brunelleschi suite sits on the third floor of the palazzo, above the library, and overlooks Renaissance architect Filippo Brunelleschi’s Duomo. The main living area was once a loggia, and Bonan kept the wooden beams and open layout to create a loftlike, contemporary space.

Other residences include the Strozzi suite (bottom right), which has an oak-paneled entry and a 1940s-?inspired design scheme, and Bonan’s favorite, the Galileo. “Galileo has its own private rooftop terrace with a 360-degree view of Florence, a unique amenity to have in the middle of the city,” he says.

A one-eighth share, priced from about $311,000 for a studio to $781,000 for a two-bedroom, entitles members to six weeks of use per year. (Additional weeks are offered on a space-available basis.) The club also has made 18 of its units available for whole ownership, at prices from about $2.5 million to $6.8 million.

The two-bedroom, 2,637-square-foot Michelozzo suite, located on the palazzo’s second floor, debuted in 2006. “This was our model apartment, so we wanted to show elements that you might find in the other units,” says Bonan. “It was sort of a laboratory where we experimented with volumes, colors, and materials.”

The process entailed the careful restoration of the suite’s original floors and walls, including the early-1800s stuccowork in the living room. The space also displays an antique-inspired chandelier by the Florentine company Albizzi.

For the master bedroom, Bonan created a boxlike compartment that houses a walk-in closet and bathroom; above it are original 19th-century frescoes and a faux catwalk. “When the bank purchased this building in the early 1900s, the frescoes from the 1800s weren’t considered interesting, so they covered them up with white paint,” says Bonan. “People see this space now and are amazed by the detail.”

The Department of Fine Arts in Florence supervised the restoration of the palazzo’s artworks, which took 14 artisans three years to complete. One of the pieces, a statue depicting the Greek goddess Diana as a huntress, is the work of Gherardo Silvani. The sculptor carved the figure out of Carrara marble in the early 17th century, and now it greets visitors at the bottom of the main staircase on the ground floor. Above the staircase are frescoes depicting Christianity’s seven virtues; over the gated entryway that leads to the staircase is the Tornabuoni family crest. Bonan kept the ground floor’s private staircase less ornate.

Other artifact-rich spaces include the Sale delle Muse suite, where the Dafne opera debuted, and Alessandro de’ Medici’s papal apartment, which features frescoes painted by Agostino Ciampelli between 1590 and 1594.

“Most people would have to visit a museum to see works of this stature,” says Bonan. “To experience this kind of art in a private environment is a unique experience.”