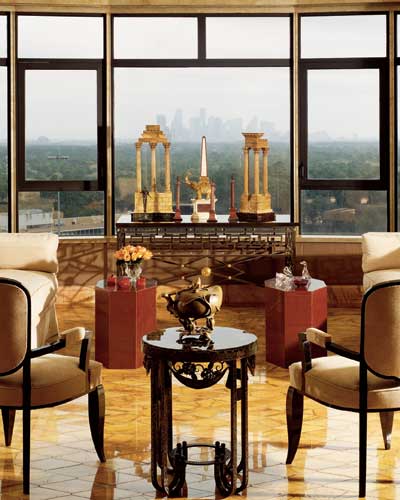 Los Angeles designer Mel Lowrance is delighted when his touch cannot be detected in his work. “Somebody would really have to know my work to be able to say, ‘Mel Lowrance did this,’ ” he explains. “I rarely do what I call a stage set design. I ask clients what their lifestyle is and how they want to live. All my clients enjoy being part of the process.”

While he typically crafts his designs with a gentle hand, basing his work on his clients’ inclinations and tastes—occasionally nudging the latter to a higher level of sophistication—he faced an unusual challenge when Houston socialite Susan Glesby hired him to design her high-rise condominium in the city’s Galleria area. Glesby admired Lowrance’s work; he had designed nine residences for her extended Texas family, which made its fortune in the fuel transport business. However, she was unsure of her preferences and consequently could provide the designer with little direction. “I knew what I didn’t want,” she says. “He had to anticipate what I wanted, because I didn’t know what I wanted.”

With carte blanche from Glesby, Lowrance began with 3,400 virgin square feet on the 17th floor of the high-rise and immersed himself in the minutiae of the project, spending the next three years tailoring the home to suit its owner. “I probably disappear in the work, but I’m known for detail,” he explains. “I’m on the job site all the time.”

Lowrance designed the condominium so that the living room and master bedroom—the spaces Glesby would use the most—are expansive. Glesby, who is single, does not cook, and entertains frequently, also needed a kitchen that would accommodate caterers for the dinner parties she hosts and a dining room that would hold two round tables, each with seating for 10 guests. Lowrance set the kitchen in the interior core of the home and dedicated space for two dishwashers, warming drawers, and refrigerators large enough to hold catering trays. The butler’s pantry opens onto the dining room, enabling the caterers to serve guests efficiently.

Furnishing the dining room and the rest of the home required an understanding of Glesby’s elusive taste, which Lowrance gained over time. “She is very sophisticated and sometimes likes things that are quite bizarre, even in artwork,” Lowrance says. “She’s not ruffles. She’s not floral chintz. She doesn’t like lots of things around. She would rather have one major accessory on a table than four or five different doodads.”

Glesby brought in only a few pieces from her previous Houston apartment, including four Georgian gilt side chairs—Rose Tarlow–Melrose House reproductions covered in a Fortuny African print—and a large 19th-century Japanese screen from Didier Aaron, which hangs on a wall in the dining room.

A new acquisition, however, sets the tone for the home: a bronze deer sculpture by André Arbus. Glesby and Lowrance began making purchases for the condo in 1998, when French furniture from the 1940s was becoming very desirable. “I had complete confidence in Lowrance,” says Glesby, who had him approve all of her selections. “Because of Mel, I saved God knows how many thousands of dollars in errors. I don’t have any sense of proportion. When I ventured out shopping in Paris without him, someone would say, ‘You don’t need a decorator to tell you what you like.’ I would reply, ‘If I didn’t need a decorator, I wouldn’t have hired a decorator.’ ”

During several joint shopping trips to Paris and New York, they were captivated by the sleek, sensual lines that characterize Arbus’ works and some of his French peers’ works. In a gallery on the Left Bank, they discovered two black opaline glass consoles and purchased them for the spare but regal foyer. Last year the dealer called Glesby on behalf of another client, offering to buy the pieces back for more than twice the original sale price. Glesby firmly declined the request. “He said, ‘I’ll find you something else. This client wants them,’ ” Glesby recalls. “I said, ‘In that case, find something else for that client. They’re mine.’ ”

From the foyer, visitors are beckoned into the living room by dramatic views of Memorial Park and River Oaks in downtown Houston. Lowrance created two intimate seating areas and left plenty of space to walk around and contemplate the city views. A collection of meticulously selected art and objects is on display, including some 19th-century marble souvenirs from Siena, Italy, atop an Arbus console.

Lowrance’s skill in creating a counterpoint of styles impresses Glesby. “He did an exquisite job,” she says. “The house is simple but opulent. He allowed me to discover me.” In doing so, Lowrance was able to conceal his role and leave no fingerprints.