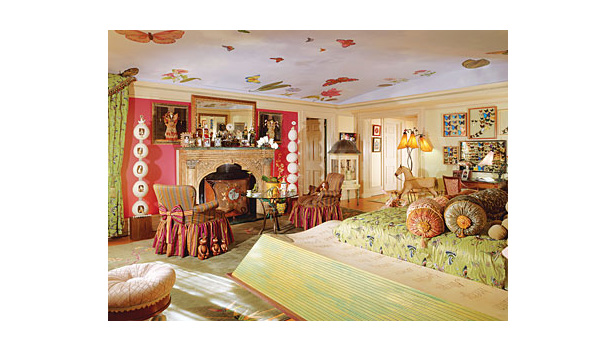 For the 2006 Greystone Mansion Garden & Design Showcase, the participating designers were asked to decorate the home’s spaces in a manner that would suit the Doheny family, if members of that once-prominent Los Angeles clan were still living there. Each November for the past five years, the estate, which occupies 18.3 acres in Beverly Hills, Calif., has been transformed into a designer show house that the public can tour. The proceeds from sales of tickets for those tours go toward the home’s preservation.

The home’s interior changes from year to year, but its history remains intact. In 1914 oil tycoon Edward Laurence Doheny purchased the property, which originally comprised 429 acres—the largest-ever private estate in Beverly Hills. He gave a prime, 12.6-acre parcel to his only son, Ned Doheny, in 1926. Two years later, at a cost of $3.1 million (about $35 million in 2007 dollars), Ned built what is now known as Greystone Mansion on the land. In 1929, four months after he, his wife, four sons, and one daughter moved into the house, Ned was found shot to death in a downstairs bedroom.

The details surrounding his death have remained murky, but the generally accepted theory posits that Ned was either the victim or the perpetrator of a murder/suicide involving him and one of his male aides. The Doheny family continued to live in the mansion until they sold it in 1955. The city of Beverly Hills purchased the property in 1965 and dedicated it as a public park in 1971.

Standing in sharp contrast to the melancholy tale of Ned Doheny is Barbara Lazaroff’s vibrant design for the Greystone Mansion bedroom that she imagined as belonging to a 12-year-old girl. Lazaroff, owner of Imaginings Interior Design in Beverly Hills, is perhaps best known for her interior designs of the restaurants Spago and Chinois, both of which she co-owns and operates with Wolfgang Puck. “From building restaurants, I knew that design has to have a soul in order to sustain,” she says. “The reason this room is so successful is because I handpicked every item with the idea that it was for a specific person.”

Highlights of the room include a writing desk that came from the estate of actress Mary Pickford, a 100-year-old antique rug, and an enormous, book-shaped bed.

“The idea is that the daughter is from a renowned family and would have things in her room that were passed down from generation to generation, along with a few contemporary items,” explains Lazaroff. As the mother of two teenage boys, she says, she realizes that the room is a bit idealized. “If a 12-year-old actually lived there today, there would probably be a plasma screen, an iPod, and clothes scattered across the floor. But this is what the room would look like if the parents were having a formal dinner party, and the daughter was forced to straighten up.”

Adjacent to the 500-square-foot sleeping area is a 96-square-foot bathroom. Lazaroff had to retain many of the home’s original fixtures and fittings, and she worked around the original tiles, countertop, and bathtub. However, she did update some items, including a light fixture’s wiring that was shooting out flames. She had mother-of-pearl patina abalone wall covering by Maya Romanoff placed on the walls, and an elaborate aquarium designed by Richard Bilow installed in the shower. “The original tiles have a mermaid pattern on them, so every year people always give this room an ocean theme,” explains Lazaroff. “However, I don’t think that anything like this has ever been done before.”