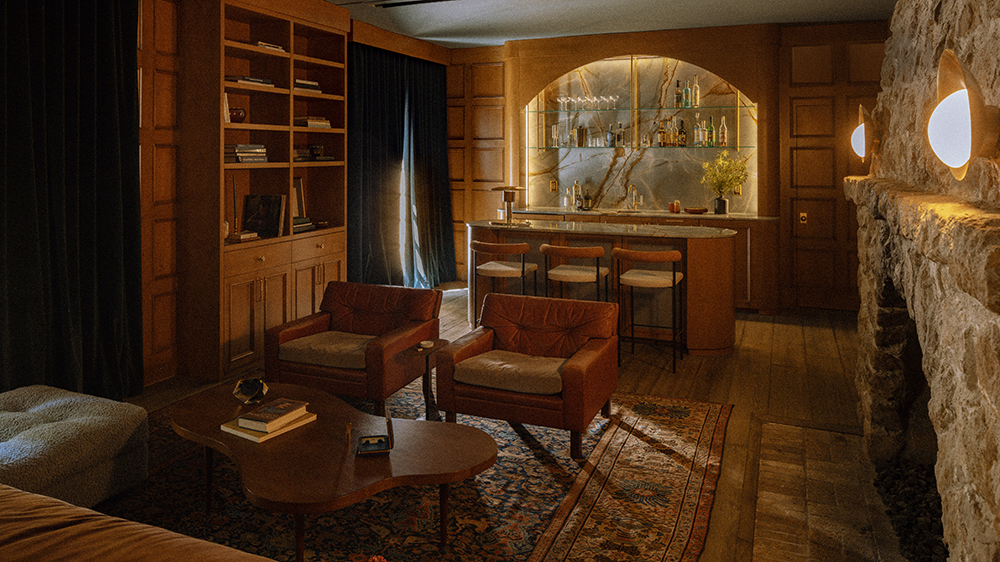 Considering the credentials of the couple she was working with, it’s not much of a surprise that interior designer Tiffany Howell’s latest project took such a cinematic turn.

Howell, principal of the Los Angeles–based studio Night Palm, had initially signed on to create an Old Hollywood–style glam room and an adjoining bath for the wife, a successful writer and producer who’s a regular on the red carpet. It wasn’t long before the husband, an Oscar-winning filmmaker, asked Howell to turn her talents to the home’s screening room. It needed the help: Prior to her involvement, the space was little more than two white walls sandwiched between an oversize stone fireplace and a set of glass doors leading out to the pool.

“He did have an AV situation and a screen,” Howell tells Robb Report. “But he wanted it to look completely different, [so] we went to town.”

Rather than a purpose-built room dominated by a massive display, the husband desired something altogether more stylish. He requested a vibe similar to the wood-paneled studies found in stately English country houses, complete with mullions, molding and an integrated bookcase. (Crucially, he also wanted some kind of bar.) The idea was that such an environment would function as more than just a spot to watch the latest cuts of his films—and that when he wasn’t working there, it would be as well-used as other high-traffic zones of the house.

A closer view of the bar inside the room  Pablo Enriquez

That thinking was informed by the kinds of changes the pandemic made to how we live in our homes—to say nothing of how much time many of us spent in them over the past few years. Howell’s client was far from the only person to ask a designer to put function and form on equal footing. “More than ever, people need environments that help to alleviate stress and restore their sense of well-being,” says Carolyn Ames Noble, chair of the American Society of Interior Designers and principal of her own Atlanta-based practice. “Clients are requesting space for socializing and entertaining, favoring relationships over seclusion, and demanding rooms that are flexible for a variety of activities.”

To create what she calls a multi-hyphenate room, Howell nixed the typical tiered banks of cushy, theater-style seats. Instead, she designed a custom sofa, ottoman and coffee table, which played nicely with two 1960s Swedish leather armchairs that she found in Amsterdam. To bring the chairs in line with the rest of the decor, she had the cushions re-covered in a new fabric. The seating area is grounded by a rare Mahal hunting rug that Howell estimates was woven sometime between 1900 and 1910.

Because she’d designed recording studios in the past, Howell knew wood would help preserve the room’s acoustic balance. The walls are covered in paneling with a honey-colored stain that feels rich, but not so dark that it reminds anyone of a fusty gentleman’s club. The ultra-thick velvet curtains over the windows and French doors mean the bass doesn’t rattle the glass during loud scenes or raucous parties.

But like any good film, rooms need strong main characters. In this one, it’s the integrated bar, dominated by a backsplash of a blue-green Italian stone called Azul Mary.

An ashtray from Spago and a book from the clients’ match collection.  Pablo Enriquez

“I found that slab of marble, and I just felt so in love with it,” Howell says. As did the client. “So I said, ‘Let’s just take this completely up the wall and make it this beautiful art piece.’ ”

In addition to providing a focal point when the retractable screen is tucked away in the ceiling, the bar means the homeowners don’t have to rush to the kitchen to freshen their guests’ drinks (or their own). The island cleverly disguises the speaker array—so, sadly, there wasn’t room for a popcorn machine.

If that compromise bothers either the husband or the wife, Howell hasn’t heard any complaints. Both clients use the space for reading, listening to music and welcoming friends and family. And its utility is as much a part of its design as any of the elements that give it such a rich and distinct sense of character.

“I feel like everyone is very interested in the story of a room right now,” Howell says. “Whereas before [the pandemic], a lot of clients—especially my entertainment clients—they were like, you know, ‘Make it look pretty.’ But now they’re like, ‘What’s the story?’ ”