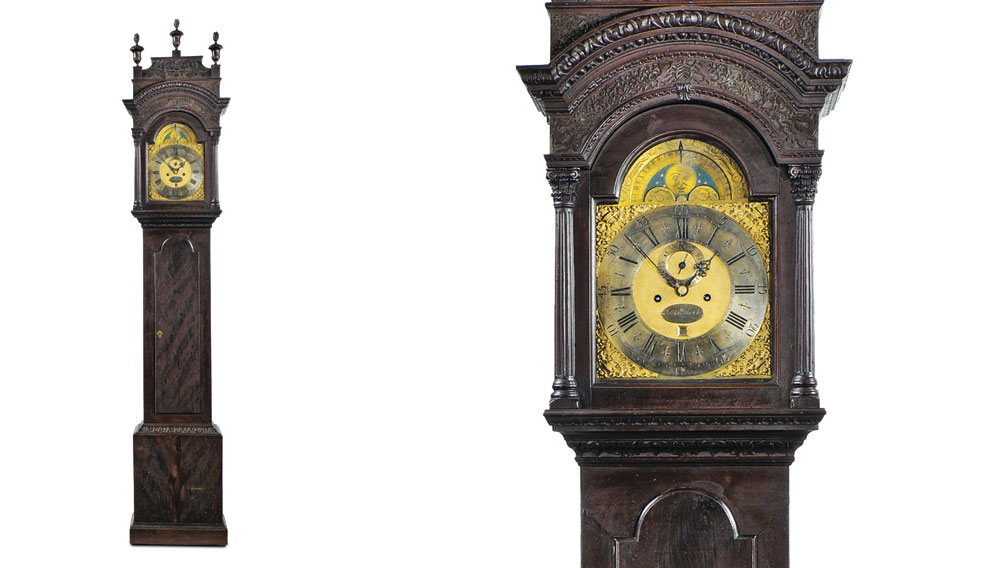 This circa-1740 tall-case clock from Philadelphia sold for an auction-record $1.6 million in 2004.

Their utility has waned, but tall-case clocks have retained their lofty stature.

When grandfather clocks were first produced, they went by a different name, and they were not your grandfather’s clocks. Known then as tall-case clocks (or longcase clocks or floor clocks), they were cutting-edge technological marvels because of their ability to sliver time precisely into minutes in an age when most people still told time by checking the sun’s position in the sky. “They were status symbols, like an expensive wristwatch is today,” says Jonathan Snellenburg, director of watches and clocks at Bonhams New York. “Only the well-to-do could afford them.”

The anchor escapement—the mechanism that maintains the swing of the clock’s pendulum, enabling the gears to advance and move the hands forward—was invented in England possibly as early as 1657, and the first tall-case clocks were being produced by around 1670, also in England. In the 18th century, they became popular in the British colonies of North America, where demand was strong enough to support several clock-making shops. The grandfather clock moniker did not arrive until the late 19th century, coming from an 1876 song called My Grandfather’s Clock by the American composer and songwriter Henry Clay Work. In the lyrics, a grandson tells of his grandfather’s tall-case clock: “Ninety years without slumbering / His life seconds numbering, / It stopp’d short—never to go again— / When the old man died.”

A clockmaker produced a clock’s works, while the construction of its case was contracted out to a cabinetmaker. The buyer often could choose from a menu of options that included luxurious woods and ornate carvings for the case and whimsical features for the clock’s face, such as a rendering of a ship that rocked with the swing of the pendulum.

A clock’s height—some were more than 9 feet tall—was dictated by the drop length that was required by the weights to run the pendulum for a week without winding. Owners of homes with relatively low ceilings would give their clocks, as Snellenburg says, “a haircut” or “a pedicure” to remove the decorative tops or feet or both. Clocks that avoided this fate command higher prices from collectors, as do those with beautifully carved cabinets and ones that have undergone minimal or no restoration. “It’s almost impossible to sell a clock with a repainted face,” says Gary R. Sullivan, an antiques dealer in Massachusetts. “Collectors have become more particular about condition and about original components.”

Christie’s American Furniture auction on January 23 in New York will include a Queen Anne–style tall-case clock dating to the early 18th century. Its brass dial is signed by William Claggett, a renowned clockmaker from Newport, R.I. The clock’s presale estimate is from $100,000 to $150,000. The auction record for a U.S.–made tall-case clock belongs to a Queen Anne–style model that was created by the Philadelphia-based clockmaker Peter Stretch around 1740. It sold at a Sotheby’s auction in 2004 for $1.6 million to the Winterthur Museum in Wilmington, Del. “Whoever commissioned it must have said to Stretch, ‘I want the best clock you make,’ ” says Erik Gronning, a vice president and senior specialist for American furniture and decorative arts at Sotheby’s New York. “And that’s what they got.”

As a household’s accurate timekeeper, the tall-case clock has been supplanted by appliances and devices ranging from the microwave oven to the cable-TV box, but a high-quality antique model is hardly obsolete. “Having an antique clock makes a statement today as much as it did in the 18th century,” says Sullivan. “It becomes the focal point of whatever room you put it in. And there’s nothing like the ticking of a clock in the house. It’s a comforting sound.”