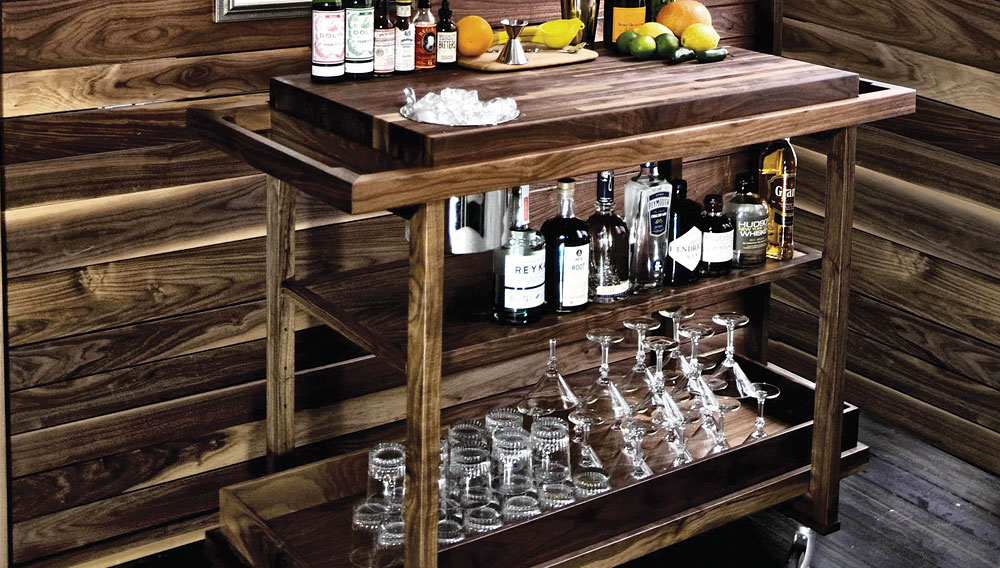 Watch any episode of AMC’s television series Mad Men, and it’s impossible to ignore the cocktail culture that pervaded the 1950s. Brady Wilcox, the chief creative officer of the New Traditionalists (www.thenewtraditionalists.com), a Manhattan furniture company, acknowledges that he often looks to the 1950s and 1960s for inspiration, so it was logical that he and the company’s three other founders would create a bar cart. They fashioned their first cart for themselves, primarily because they needed a creative and engaging piece of entertaining equipment in their showroom. Once they built the first one, though, they noticed how much attention it attracted. They realized that it had commercial appeal when many of their customers asked to order one for themselves. “I don’t know if anyone is really ever looking for a bar cart,” Wilcox says. “It’s one of those pieces where once you see it, you realize you want it.”

Crafted from North American black walnut sourced from New England and ranging in price from $2,500 to about $3,200, the cart is available in a variety of sizes with options that include an ice bucket and custom colors and finishes. As with every piece of New Traditionalist furniture, the cart incorporates references to design elements found in other types of products, which is how Wilcox and the rest of his team create modern representations of classic furniture styles. He cites one of their sofa styles, which incorporates a quilting detail that was lifted from the seat cover of a Porsche 911. Details found in other pieces of furniture can be traced to many other sources, such as the stitching patterns and details found on a pair of Alden wingtips. “Those inspirations that we all experience and love, we bring those into the furniture itself,” Wilcox says.

The New Traditionalists grew out of the team’s initial children’s furniture company, Duck Duck, which was established in 2004. Six years later, the creative minds behind the firm realized that they could apply the philosophy behind their line of children’s furniture to a new collection of furnishings tailored to adults. “We felt that there was something missing in the marketplace as far as traditional furniture that we’d put in our houses,” says David Harris, one of the company’s four founding partners. “There was a hole in the market and an opportunity to design things that would be familiar in their silhouettes, but with colorful and textural finishes that updated these pieces for your house today.”

We Slept on the Most Luxurious, High-End Sheets on the Market. Here Are the 10 You Should Get.