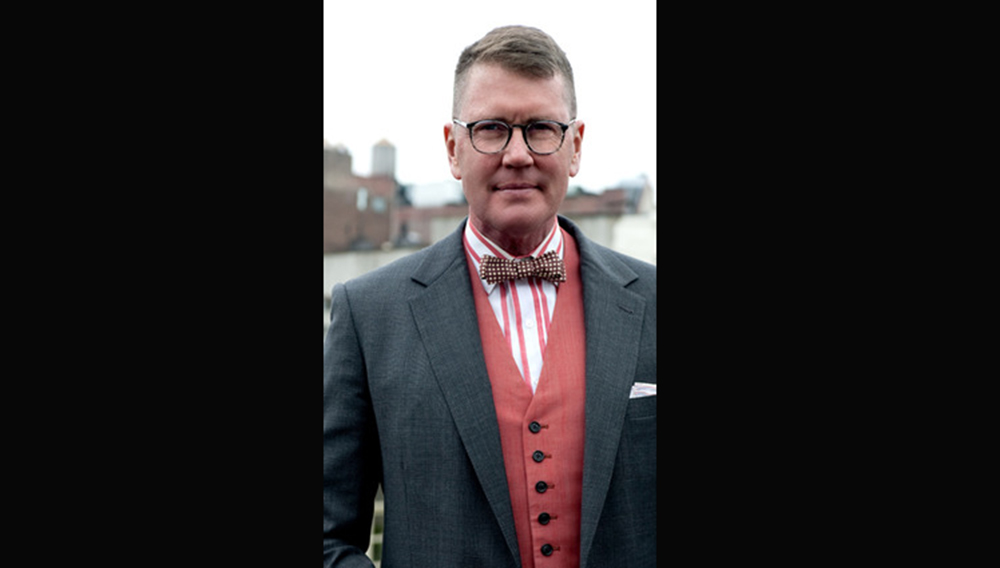 Award-winning interior designer and Winterthur graduate Thomas Jayne will share his remarkable insights on contemporary design and decoration as the keynote speaker and chairman of Winterthur’s 52nd Annual Delaware Antiques Show, as he opens the show November 6, 2015, at 10:00 am, at the Chase Center on the Riverfront, Wilmington, Delaware. Following the lecture, Jayne will sign copies of his books American Decoration: A Sense of Place and The Finest Rooms in America: Fifty Influential Interiors from the Eighteenth Century to the Present.

Described by The Wall Street Journal as a “mega decorator” and named to Architectural Digest’s 2014 AD 100 Top Designers, Jayne’s sought-after interior design talents have roots in Winterthur, which he describes in the following video:

“Thomas Jayne is truly one of Winterthur’s own, having graduated from the master’s program established by Henry Francis du Pont in partnership with the University of Delaware. In its 63 years, the Winterthur Program in American Material Culture has produced many of America’s leading curators, academics, and museum directors. To that distinguished list may now be added one of America’s top scholar decorators. More than any student before or since, Thomas Jayne absorbed far more than the academic curriculum. During his two years at Winterthur, Thomas seems to have channeled H.F. du Pont and absorbed his approach to color, decoration, and room arrangement. To put it simply, Thomas Jayne was learning everything we were not teaching! If H.F. du Pont were with us today, he would be in the front row for Thomas Jayne’s lecture and nodding approvingly,” said J. Thomas Savage, Winterthur’s Director of Museum Affairs.

After internships at Historic Deerfield, The Metropolitan Museum of Art, and The Getty Museum, Jayne honed his design philosophy at two of America’s most iconic design firms, Parish-Hadley and Associates, and Kevin McNamara, Inc.

“It is an honor and a privilege to serve as honorary co-chair and deliver the keynote lecture at the 2015 Delaware Antiques Show, benefiting one of this country’s most important cultural institutions. I see myself as a scholar-decorator much as Henry Francis du Pont, the founder of Winterthur, saw the ideal curator as part decorator, part librarian,” Jayne said.

Jayne’s internationally acclaimed Jayne Design Studio, celebrating its 25th anniversary this year, has received a bevy of top awards including Elle Décor’s A-List (since 2013), Luxe Magazine’s Gold List 2014, New York Spaces Top 50 Designers (since 2009), 2014 Stanford White Award from the New York Chapter of the Institute of Classical Architecture & Art, the 2013 Arthur Ross Award from the Institute of Classical Architecture and Art, the 2014 Pillar Award from the Preservation League of New York State, and others. In addition to the books he has authored, he writes a blog, Decoration-AncientandModern.com. The studio’s work can be seen at jaynedesignstudio.com.

As one of the most highly acclaimed antiques shows in the nation, the Delaware Antiques Show will present a spectacular showcase of art, antiques, and design. Featuring the finest offerings from more than 60 distinguished antiques dealers, the show will highlight the best of American antiques and decorative arts. Celebrate the opening of the show with exclusive early shopping and cocktails at the Opening Night Party, Thursday, November 5, 5:00 – 9:00 pm.

The Delaware Antiques Show also will feature an inspiring loan exhibition from the Museum of the American Revolution, which houses an unparalleled collection of artifacts, weaponry, personal items, fine art, printed works, and manuscripts dating to the American Revolution. The loan exhibition will be on view throughout the show and is included in General Admission. It is sponsored by Haverford Quality Investing – The Haverford Trust Company.

Tickets are on sale now for the 52nd Annual Delaware Antiques Show. Tickets are valid for all three days and include special lectures on Friday, Saturday, and Sunday as well as the special exhibition. For more information or to purchase tickets online, visit winterthur.org/das or call 800.448.3883.

The Delaware Antiques Show is sponsored by Wilmington Trust and benefits educational programming at Winterthur.

Weekend lectures sponsored by The Hunt.

$15 per person; $13 Winterthur Members; children under 12 free.  Tickets are valid for all three days of the show.

The Chase Center on the Riverfront is located at 815 Justison Street, Wilmington, Delaware, 19801. For directions, click on Get Directions or contact the Wilmington Riverfront Corporation at riverfrontwilm.com, 302.425.4890.

For additional information and updates on the exciting line-up of features at this year’s Delaware Antiques Show, please visit winterthur.org/das or call 800.448.3883.