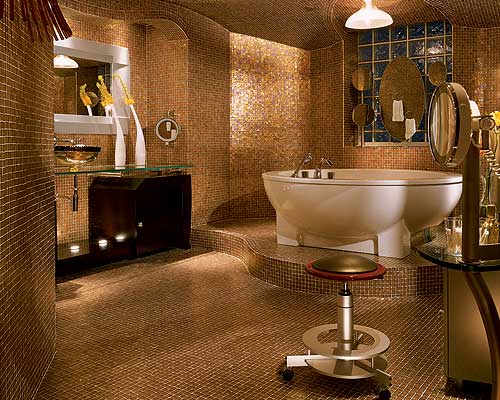 Despite the 3,000 square feet of glass mosaic tile that was used to cover nearly every inch of this 500-square-foot bathroom, designer Charles Greenwood insists that it is not an overwhelming element. “People don’t walk in and say, ‘Wow, that’s a lot of tile.’ They walk in and say it’s like nothing they have ever seen,” he says. Setting the classic white Michael Graves for Duravit tub against Oceanside Glasstile’s luminous mosaics was Greenwood’s way of subliminally pulling the room together. “It’s easy for something like the bath to be an overwhelming standout because of its size and placement,” he says, “so you have to find a material that complements the space without dominating it.”

The rest of the Boca Raton, Fla., home is awash in white walls, but Greenwood chose a warm, neutral Mediterranean palette for the bath to distinguish the space. “The Oceanside tiles are particularly translucent, whereas most tiles are opaque. Light hits the glass and gives the entire room a burst of color,” Greenwood says. “And while their color consistency is very strong, each one is slightly curved and irregular so you can tell that it wasn’t something mass-produced.”

Working with furniture designer and manufacturer Dakota Jackson, Greenwood included one main vanity and an additional makeup vanity. “The large mirror over the sink looks like metal, but it’s actually wood with an automotive finish,” says Greenwood. “It was something Dakota came up with. It looks and feels like car paint, which really interests people.”

The room is divided into his and her sections. Her space, shown here, includes a Philippe Starck for Hansgrohe shower, a custom handblown glass sink, Valli & Valli hardware, and an LCD television, all of which contribute to the room’s modern tone. “We always try to create a timeless, classic look for every client that’s unique for them,” says Greenwood. “Nothing in this room was copied. It’s a completely one-of-a-kind space.”