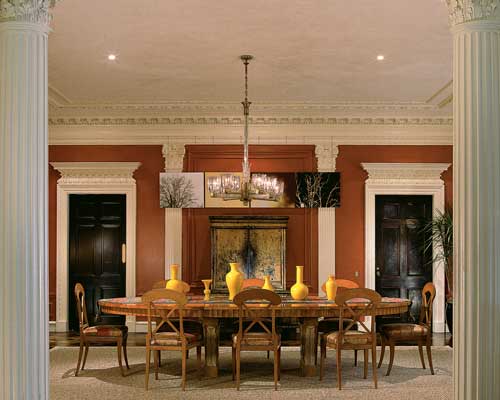 When her clients insisted on a table that would seat 24 people, interior designer Jennifer Garrigues doubted that she would be able to comply. “Then I was shopping in London and found the perfect antique table with exactly 24 chairs,” says Garrigues, who was born in England and is now based in Palm Beach, Fla., and New York. The serendipitous discovery matched the couple’s eclectic taste and has proved an ideal complement to their contemporary art collection—one of the few things that they brought with them when they moved from New York into this four-story residence in Chicago.

Decorated with Burmese temple wall hangings (purchased at the Golden Triangle in Chicago), a 1930s Art Deco chandelier (from Lorin Marsh in New York), Japanese river stone–patterned fabric, and a collection of yellow table jars (from Primitive Artworks in Chicago), the dining room is perfectly suited to its purpose. “It’s a room where people talk, and the decor stimulates conversation,” says Garrigues, who has worked on several of the couple’s other homes. “I’m certainly not a white-on-white person, and neither are they.”

The house was constructed in 1880 for Potter Palmer (the founder of the store that became Marshall Field’s and a prominent real estate developer in downtown Chicago) and then renovated in 1905 by Ernest Graham of Graham, Anderson, Probst and White (architects of the Wrigley Building and Pennsylvania Station). Architect Marvin Herman oversaw the most recent restoration, in 2002, during which he retained the cornice moldings and parquet floors. “We kept the room large, but added pilasters and two doors that lead to the kitchen and library,” says Herman, who feels equally at home working with historical or contemporary designs. “The exterior is all limestone, and all of the rooms are spacious. We tried to keep as many of the historical elements as we could while updating all the systems and making it comfortable for modern living.”

Oval in shape, the room also includes banquette areas at either end, so that whether it is hosting 20 people or 200, the space adapts.