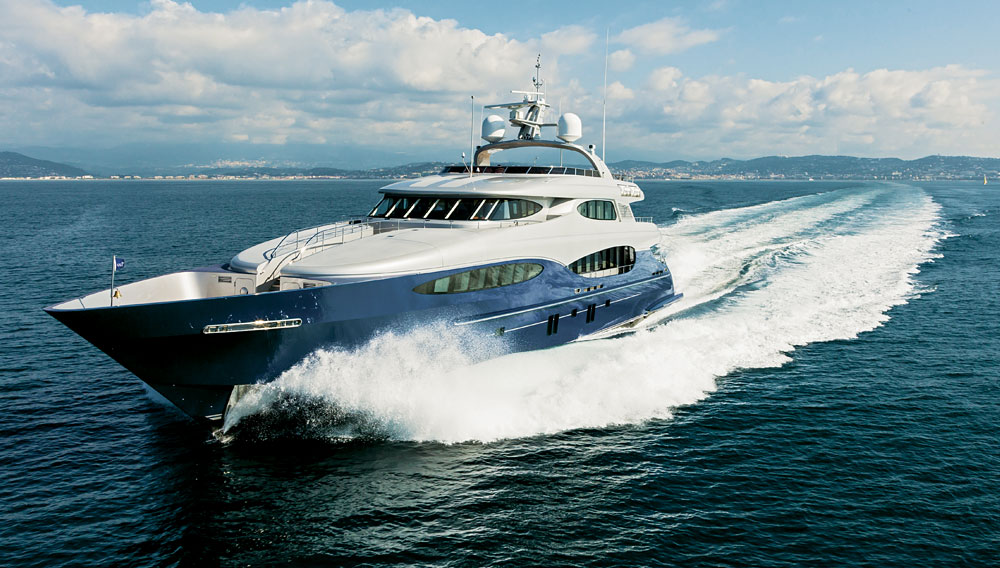 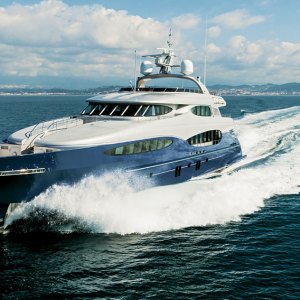 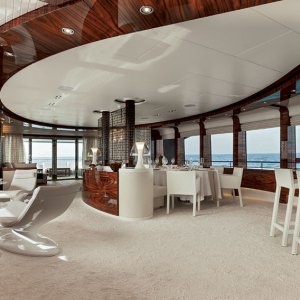 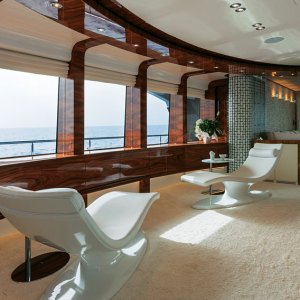 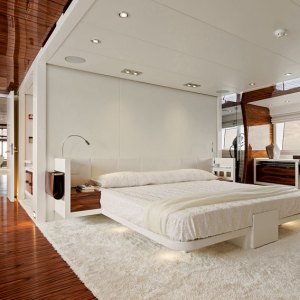 Vicem Yachts is well known for building boats with cold-molded mahogany hulls. But for its first superyacht, the Turkish shipyard ventured into composite construction, and the result is the stunning 151-foot fiberglass-and-epoxy Vulcan 46, which at press time was available for sale for $31.4 million through Fraser Yachts. “It’s possibly the biggest one-piece mold in all of Europe and Asia,” says Bas Mulder, principal of Mulder Design, the Netherlands-based naval architecture firm behind the hull design, engineering, and initial basic layout. Pristine white furnishings and high-gloss rosewood veneer dominate in the vessel’s 4,600-square-foot interior, including the main-deck saloon and dining area. The perfectly polished design is the work of Art-Line Interiors, a Netherlands firm whose clients have included royals and other international elites.

“We brought the lines and character of the boat inside,” says Frank L. Pieterse, a principal at Art-Line Interiors. In the main saloon and dining area, lacquered rattan dining chairs and a sleek carpet—all in white—keep the tone informal. “Coming [into the room] barefoot from swimming, you aren’t shocked by a very classical or formal saloon,” he says. That aesthetic continues throughout the Vulcan’s four decks, including inside the master suite, crew area, and five guest bedrooms, where everything “flows with furnishings in one fluent, open feeling,” he adds. The saloon and dining area’s large windows bring the ocean views indoors, while the rosewood-and-leather bar appends seamlessly via wire mesh to the rosewood-bordered, faux-leather ceiling.

Powerful engines and pounding waves tend to make yachts of this size extremely noisy. But unlike vessels made from traditional materials such as steel or aluminum, composite yachts are lighter—the Vulcan 46 weighs just 460 tons—and much quieter. “Hit a metal tank and you hear a big bang,” explains Mulder. “Hit composite, and there’s nothing or it’s soft. We took this even further with insulation.”

Fewer thumps in the night are likely to be appreciated by those in the Vulcan’s sleeping quarters. A custom leather-and-lacquered-wood bed sits like an island in the 560-square-foot, full-beam master suite on the main deck. A walkway of rosewood veneer connects the dressing room, gym, and office. In the master bathroom, opposite the tub, is a curved wall clad in copper sheets. “They actually conceal the staircase” that leads up to the upper deck and wheelhouse and down to the lower deck, says Pieterse.

Daylight pours through a set of glass panels forward on the flybridge, creating an atrium-like effect over the staircase, which splits at the lower deck to maximize space. “Five guest bedrooms is a lot for this size [yacht],” says Pieterse. We needed every inch.” Off the upper-deck saloon, a nook (below) in the stairwell has a reading light and computer ports. “You can retreat without losing contact,” Pieterse adds. In the upper-deck saloon—a space more formal than its counterpart on the main deck—faux leather panels inlaid with rosewood create a dramatic ceiling over the bar and seating area, where a Giorgetti leather sofa rests on a carpet almost the same shade as the rosewood.

Out of the Woods

While sliding glass doors on all of the Vulcan’s decks protect the interior of the yacht from the elements, outdoor areas exposed to salt and sea and the weather boast hardy teak that can withstand adverse conditions. On the upper aft deck, a custom 12-seat dining table is composed of dozens of pieces of lacquered teak. The adjacent seating area consists of two woven bamboo sofas and matching ottomans with faux-leather cushions. Two white-lacquered rattan chairs provide seating in the sun, just beyond the protective overhang. The projection is composed of composite materials and white-lacquered wood, the latter a subtle tribute to examples of traditional shipbuilding found throughout the yacht. All of the yacht’s exposed flooring, including this path on the main deck, is untreated teak, which develops a silvery patina with age.

The Vulcan 46 makes disembarking easy for its passengers: The touch of a button sets in motion the hydraulic ramps and hinges controlling the aft hatch. So the question is not how one would leave, but rather why. The eventual owners of this custom megayacht will find numerous forms of entertainment are also at their fingertips. The hatch’s cover, which is made of the same blue fiberglass as the hull, conceals two Jet Skis and an inflatable speedboat. For more leisurely recreation, those aboard can use the flybridge’s six-person Jacuzzi—yet another vantage point from which to soak up this high-seas retreat.