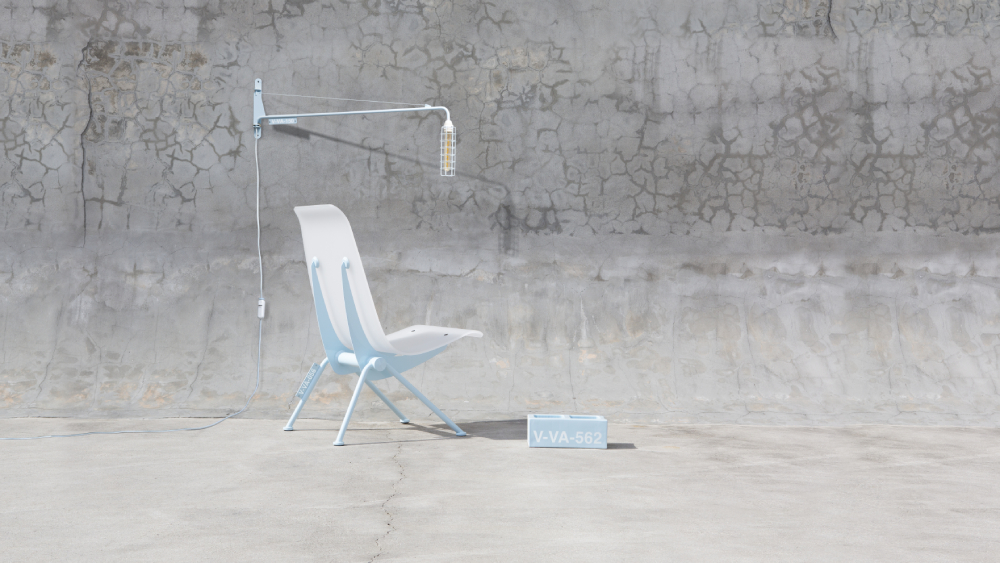 The multihyphenate designer most often associated with his role as Louis Vuitton’s menswear creative director and head of Off-White is partnering with Swiss design company Vitra. Together, they’ve devised a lineup of three limited-edition products that will be available in the U.S. through Basic.Space. Consisting of the Ceramic Block, Petite Potence wall light and Antony armchair (the latter two originally designed by Jean Prouvé), the entire collection is rendered in an Instagram-friendly shade of baby blue.

As a whole, the trio is an extension of Abloh’s penchant for reworking existing things to fit his vision of modernity. To celebrate the launch, Abloh’s London-based studio, Alaska Alaska, created a six-day pop-up in Miami’s Design District where DJ Pedro Cavaliere will perform on Basic.Space’s ongoing live stream, which will also feature the collection. Abloh’s aim with the project is to invite a dialogue with audiences traditionally left out of the larger design conversation. “My hopes for this collaboration are to further strengthen this bond with the new generation, providing them with further inspiration, as well as room for thought and a sense of inclusion,” Abloh said in a statement.

Family-owned and operated for 80 years, Vitra is a fitting partner for Abloh and his ambitions. The company has a history of working with multidisciplinary creatives who can put a fresh stamp on its Swiss sensibility. CEO Nora Fehlbaum valued Abloh’s position as an outsider who could bring something new to the established firm. The co-branded products are sure to get attention from Abloh’s loyal social media fanbase. Abloh and Fehlbaum will have a sit-down conversation about the collaboration for that audience on IGTV.