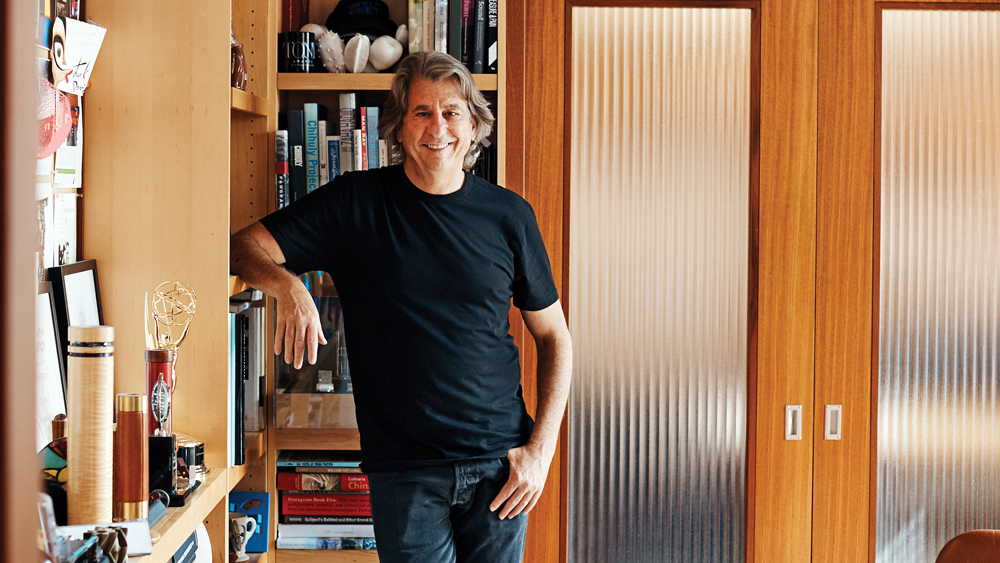 If you have been to a sophisticated restaurant or luxury hotel, visited a theater production, or relaxed in a public space in the last 30 years, then you know Mr. David Rockwell. Innovator and icon, the architect and founder of the seminal cross-disciplinary studio Rockwell Group in New York City and Madrid, he has perfected a rare kind of cultural resonance, creating spaces that pulse with narrative and purpose, but don’t rely on surface-level dramatics. From high-end residences to retail settings and product, the effect is layered and immersive.

His love of theater started during childhood, and so did a passion for the piano – a pursuit he’s revisited. A master of experiential design, Rockwell willingly rejects the obvious. “The thing that interests me most is new challenges. And ‘new challenges’ doesn’t mean new building types because you can run out of building types. Much like a play, where you’re collaborating with a group of people to create this intense memory for an audience that may only last two and a half hours, for me, design is about creating memories. When I go around the world what I’m collecting is different things that create these memories—and that becomes like a bank of things we can use in our work.”

For my 60th birthday, I had a big party at the Central Park Zoo. A blues band came, and I sat in and played with them a little bit. Then I started practicing one of Chopin’s Preludes. Then I met Seymour Bernstein; he’s very well-known and teaches much higher level pianists than me. But I played for him, and he took me on as a student. I have three pianos, including one in my office—a Steinway Model L 1959 baby grand in walnut, an ebony Steinway upright, and a polished ebony Yamaha upright that you can play with headphones at night.

The Art of Friendship

I was friendly with Lebbeus Woods, the incredible American architect. And I own three of his drawings. He really explored the world graphically in a new way— he created worlds no one’s ever seen before. I also  have four or five pieces from Tom Otterness, who is a friend and sculptor.

Through the Looking Glass

The first kaleidoscope I ever got was when I was living in Guadalajara, Mexico. I was 17. It was a small, lightweight maple-wood cylinder that I got in my favorite place, the market. I acquired one that has antique porcelain on  the outside. I have another that’s powered by running water. I have about 35 or  40, and I keep a majority of them on my bookshelf in the office. Their transformative nature is a constant source  of inspiration. They serve as a reminder that we can take  a vast array of ideas from different fields and areas and combine them to look at things in a fresh way. Taking everyday views and remixing them is so inspiring, and that’s sort of embedded in the DNA of kaleidoscopes.

I like James Perse shirts because they’re comfortable, black Levi’s, and I do have several different shades of Prada sport coats because they’re so beautiful, and blue Prada button-down shirts. For me, there’s something about not having to think about it too much. [When the Tony Awards were coming up] I went to Prada, I got this unbelievable blue suit, which I wore, and I won, so that’s now my good luck suit.

Central Park is a great escape. So is the Hudson River Park, and I live right on that park. New York has reinvented its waterfronts in an amazing way. In Brooklyn, I go to Bargemusic, which is a floating concert hall in  a 19th-century barge. It’s a great place to hear music and actually look at the skyline.

I’m loyal to the restaurants we design. So I love Nobu. I’ve grown up with Nobu over 25 years. If I have a free evening, that’s the place I circulate to. I love Orso in the Theater District, which we didn’t design,  but I love the service and the subtle design there. I love the restaurant at the Hotel Bel-Air in LA that we designed for Wolfgang Puck; it’s such a magical setting.

On a suggestion from my daughter, who is 16, I did start on Instagram, mainly as a way to communicate with her, and it’s turned out all I really do is look at cute dogs. There are all of these amazing dog and animal things on Instagram. So that’s one of my peaceful mind things. We have 10 dogs in the office on any given day.

These Sculptural Tables Are Made From One of the World’s Most Sustainable Materials: Cork