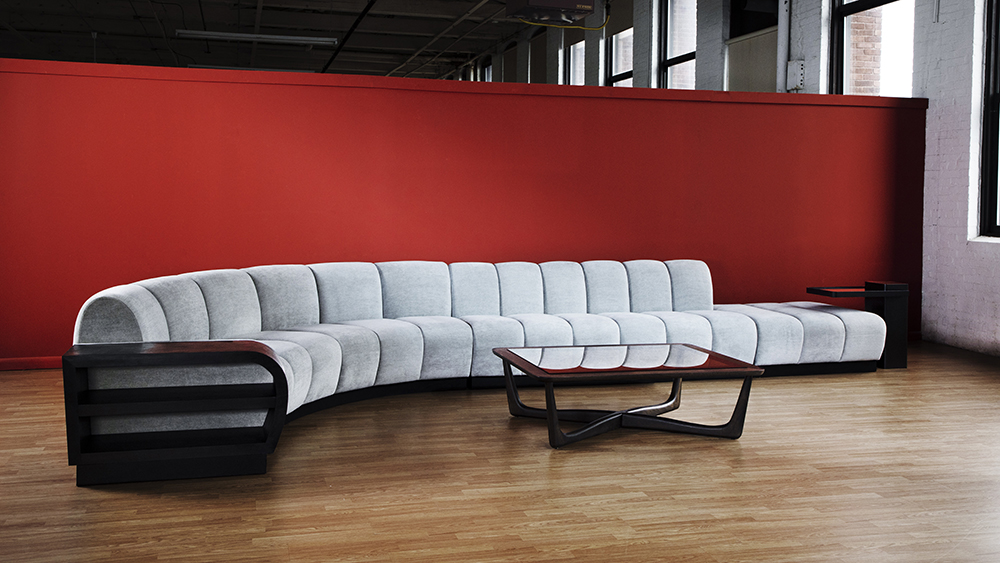 Vladimir Kagan is primarily known for his big curvy sofas. However, the renowned furniture designer’s work, which spans a whopping seven decades, is more than just a series of increasingly twisty seats. His former apprentice, Chris Eitel, now the Vladimir Kagan Design Group’s director of design, is showing another side of the late visionary’s story with a new collection of reissues for furniture supplier Holly Hunt.

“There was a little bit of a desire on my part to do some linear stuff but also make sure that it didn’t get forgotten that not everything he did was a curve,” Eitel tells Robb Report. “He did have this more architectural style.”

One of the best examples of this kind of design is the Roll Back sofa, which Kagan originally designed in the 1960s. Rife with right angles and straight lines, save for the circular back cushion, it’s a design that has largely flown under-the-radar until now. Eitel recalls falling in love with it after seeing the piece at the home of Kagan’s sister in Switzerland. The Biscuit sofa, meanwhile, looks a bit more like what devotees have come to expect from the American designer, featuring big, dramatic curves throughout its design.

The Roll Back sofa, which Kagan originally designed in the 1960s.  Steve Bensity

All of the pieces were carefully updated, while still remaining faithful to the original design. Most of the changes are small improvements that take advantage of more contemporary engineering. Rollback, for example, was tweaked to include an internal spring system. “I was able to look at some photographs and old drawings that we had to see how they were done before and decide how we wanted them to be seen now,” says Eitel of the research and design processes.

The remaking process is helped by the fact that Eitel worked directly with Kagan during his apprenticeship. The two first started working together in 2013; after Eitel finished school, he began living at the brand’s furniture studio in Nantucket. He regularly travelled with Kagan and even shared an office with him. “We learned a lot. We learned how to work together, and how to get his vision out,” he says. “Doing all of that kind of set me up for doing what we’re doing today and being able to know, ‘Okay, this is how it’s supposed to look, this is the vision he’s trying to convey, this is how to reinterpret his sketch.”

The Elegante chairs and a dining table, both first designed in the 1960s.  Steve Bensity

Eitel’s hope is that these new reissues with Holly Hunt will introduce a different aspect of Kagan to a younger crop of interior designers, many of whom are likely familiar with his work or have clients who regularly request it. For those who already know, love and collect him, it’s all gravy.

See more of the collection below:

Eitel in the studio.  Steve Bensity