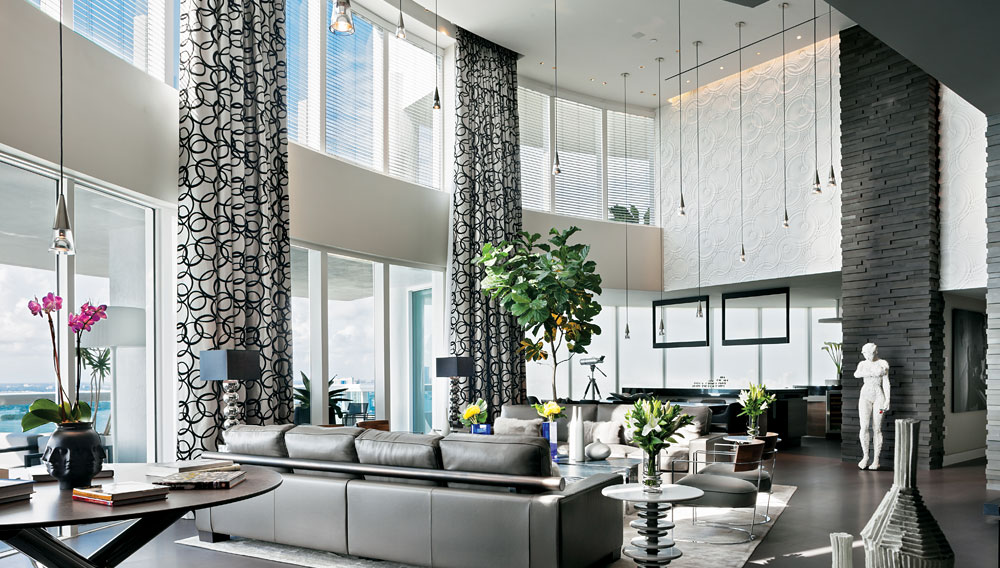 David de la Garza coinedthe term Miamiyorkian to describe his darkly elegant and thoroughly sophisticated design for this 9,000-square-foot condo in a South Beach high-rise. The 34-year-old, Mexico-based architect completed the home in the fall for its international industrialist owner, incorporating gray quartzite—both on the floors and in the columns’ bricks—that recalls an edgy New York loft, while letting in Miami’s seaside atmosphere through the property’s expansive windows. In the great room, the mechanized drapes for the double-height windows emphasize the space’s 18-foot ceilings. Sofas and chairs by Flexform anchor the space, which features White Lady, a Lego sculpture by Nathan Sawaya. For the home’s second floor, de la Garza had the concrete slab and the support columns replaced with glass and steel—a process that required the use of X-rays to locate the underlying tension cables. He says that the stairs’ right angles “move toward chaos” in the media room, an irregularly shaped space showcasing a floor-to-ceiling graffiti mural commissioned by the homeowner.

The architect refers to the powder room as escotilla, citing the Spanish word for “hatch.” More accurately, however, he means “head,” as in a ship’s privy. Located under the stairs to the rooftop deck, the space features a ribbed-and-riveted steel ceiling resembling ship siding, a door with a porthole, and exposed plumbing that recalls the inside of a ship’s bilge. Mirrored walls seem to expand the space, and up-lighting from the Cosmos marble floor imparts drama. Upscale touches include the painting, from the homeowner’s collection, and Artemide’s Tolomeo lamp.

In the custom-built Ornare kitchen, black glass and lacquer reflect the home’s flashy locale. The egg-shaped island of zebrawood and polished black granite features a concrete-colored table of Corian, as well as a pop-up TV embedded in the work surface.

Despite their dark-hued decor, the upstairs spaces still exude warmth thanks to their light-colored woods, rich leathers, and cozy carpets. A spiral staircase connects the second-floor game room to the home’s private rooftop deck. The stairs’ solid red oak planks jut into the stairwell, creating a vortex into which tumble the figures of Bénédicte Blanc-Fontenille’s Suspension sculpture.

For the game room, de la Garza created a bespoke wall unit of zebrawood and stainless-steel shelves. Two F-4 fighter jet ejection seats refashioned as stools by MotoArt belly up to a marble bar near the windows. The stools add wit and a hint of the unexpected to the stylish hangout; their hard metal edges juxtapose texturally with the custom alpaca rug’s supple fur and the buttery leather of a sofa from Luminaire. On the coffee table, what appears to be a ceramic megaphone is actually an acoustic dock by en&is for iPod touch or iPhone devices.

Custom touches distinguish the master bath. Radiant heat warms the Thassos marble floor, which is a stark contrast to the dark granite sink and walls. A zebrawood vanity designed by de la Garza raises the sink two inches over its usual height to accommodate the homeowner’s stature. Behind the mirror is a TV that the owner can watch while standing at the sink, soaking in the tub, or relaxing in the sauna.

In the master bedroom, another aviation-influenced MotoArt piece—this one fashioned from a DC-9 fuselage—hangs above a Minotti bed. The architect positioned the artwork so that it would reflect the planes landing at Miami International, as well as the cars on the causeway and the boats in the marina. The female torso by Niso Maman brings a sense of serenity.

“I think this is the only outdoor putting green in Miami on such a high floor,” says de la Garza of the home’s 39th-floor semicircular green, which wraps around the entire unit. Zaha Hadid’s white lacquer vase-cum-sculpture Flow stands not far from one of the holes. On a lower deck, the architect concealed lighting beneath the Kettal daybed and sectional seating, under the gray quartzite pavers, and within the vertical beams’ grooves so that light would be glowing rather than glaring. Embedded in the custom stainless-steel planters are speakers that amplify whatever is playing on the Runco CP-42HD flat-panel TV, which is housed in an enclosure that is impervious to the elements. The decking is Resysta, a recyclable, German-engineered material made of rice husks, salt, and mineral oil. For the pool, de la Garza sought just the right shade of glass tile. The blue that the architect finally chose not only complements the Atlantic waters that form the home’s backdrop, but also evokes the darker shades at play throughout the home.