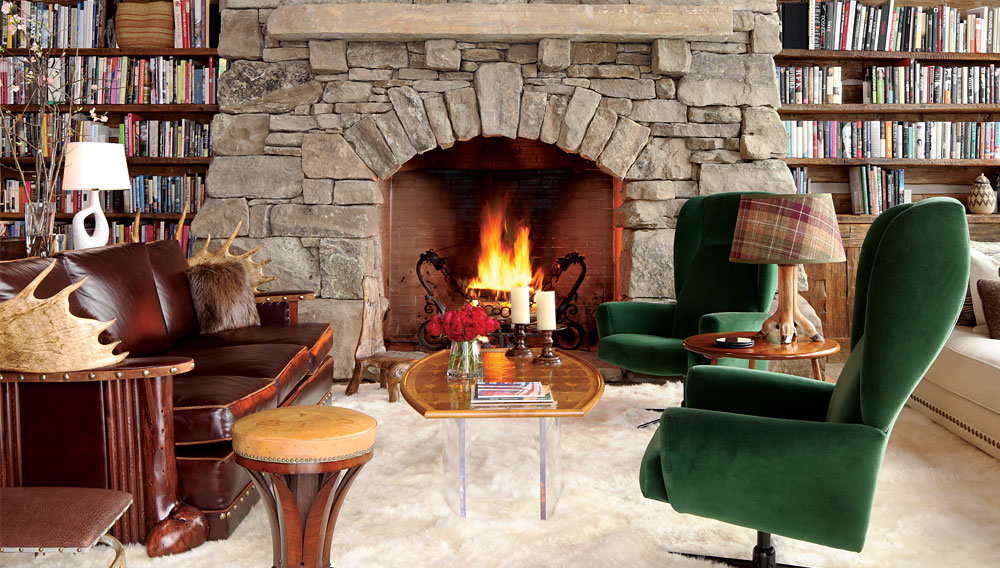 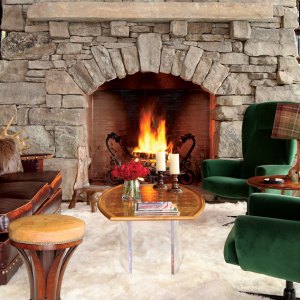 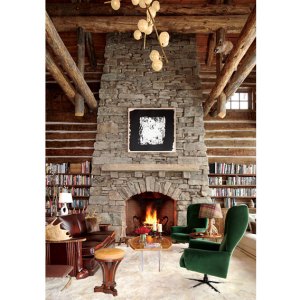 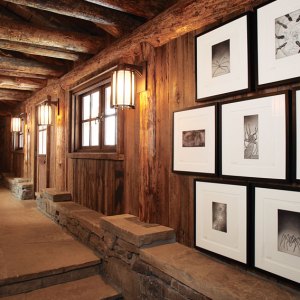 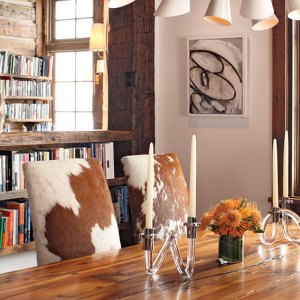 Reading a written inventory of these disparate things, you may ponder whether they go together, or if they even should go together. But look on the first image: Each item on the list appears in this home’s great room, and everything coexists. Visually, it works. It works so well, in fact, that only when you start naming and identifying the constituent parts both here and throughout the property do you begin to realize how complex and daring the whole thing is.

The Manhattan-based architect and interior designer William T. Georgis has built his career on his talent for accomplishing high-risk aesthetic balancing acts. As part of a wall-to-wall redesign, he arranged all of the elements in the great room and decorated the rest of this three-story, seven-bedroom, 7,300-square-foot home in a mountain resort town in the northwestern United States, completing the project in 2010. The hard part wasn’t choosing the pieces; it was finding the proper place for each. “It took a lot of fussing to get it to work,” he says. “Subtle fussing, but fussing nonetheless.”

Another challenge was balancing the great room’s competing points of interest: the fireplace, the hideaway TV (not shown), and a view of the landscape. Georgis not only harmonized them but also granted his clients’ wish for the space to serve as an impromptu screening room by placing ample seating, in the form of a 14-foot-long daybed, beside the window. “The daybed anchors that end of the room,” he says. “It’s unbelievably luxurious to lounge on. You can have six or seven people on it, all piled up.” The 600-square-foot great room includes a bar and a chess table, but the dining room is adjacent, set apart by a half-wall.

Georgis’s approach to designing a home is straightforward—but not easy. “I go spend time in it,” he says. “I try to understand what the place is about and what it wants to be and how the client wants to live in it.” For this house, which was built in 2004, Georgis opened himself to a riot of influences, including art deco, old Westerns and atmospheric films such as Road House (the one with Ida Lupino), and national parks architecture (dating to the Depression and earlier), which often combined practical, natural materials with Asian touches. The zebra skin in the great room’s bar reminded him of black-and-white motifs popular in the art deco era.The vintage films gave rise to the plaid upholstery seen on the chairs in the lower stair hall (above, lower right), which is situated beneath the stairs. And the national parks styleinspired the Japanese lanterns that grace a hallway (left) with a recycled plank floor. Georgis designed the lamps and commissioned a Venetian glassworks to create them.

Introducing strong color to the home’s billiard room—in the forms of red clothon the billiard table, a red-dominated Louise Bourgeois drawing, and two vividly red button-tufted leather-and-cowhide armchairs—was “a no-brainer,” says Georgis. “Red adds warmth, which you want indoors in the mountains,” he says. “In a dark, wooded room, it takes on a luminosity that’s really powerful.”

Contributing actual luminosity is The Handle Comes Up, The Hammer Comes Down, a Doug Aitken wall sculpture that hangs near the billiard table. It is one of several artworks from the homeowners’ contemporary art collection that grace the property. “It’s lit from within,” Georgis says. “It really saves that room from becoming a dark morass. The force of the piece stands up to the dark log construction.”

His use of mortared dark logs for the sides of the room enabled him to eliminate the painted walls that the owners had inherited and add graphic interest; he employed the same treatment in the great room. “It reinforces the architectural setting and allows the pieces in [the space] to gain their power and their voice,” he says.

Though Georgis decided against changing the home’s layout in any significant way, he did strive to counter the “somewhat somber” impression it once made by including lighter aspects, literally and figuratively. The master suite, for instance, retains its rugged fireplace and its dark wooden beams but benefits from the strategic use of furs, sconces, and chandeliers. While the bedroom lacks the public areas’ more exuberantly whimsical details—such as the taxidermic raccoon that hovers over the great room’s chess table and is reflected in a mirror in the dining room (see pages 60 and 61)—it restates the home’s prevailing themes in a more muted fashion. “I also tap into the tropes [of log cabin and mountain retreat design], but I’m careful to juxtapose them, work against them, to create a frisson, a charged situation,” Georgis says. “There’s a game to be played here, but carefully, so it feels that the interiors belong to the home without becoming a cartoon version of it.”

The media room on the lower level lacks the vista of the great room but has its own alluring features. Siberian birch covers the walls, shearling and leather pillows line the sofa, and a painting by Rose Wylie dominates.

Perhaps surprisingly, a number of the mountain home’s furnishings were sourced from New York; and of course, there are those that were not. The Cody, Wyo.–based artist Marc Taggartwas commissioned to create the Molesworth-style couch in the great room. The antler-horn chandelier in the billiard room came from an artisan in the American Northwest. The aforementioned raccoon was purchased from a resident taxidermist who ferried the animal to Georgis in the flatbed of his pickup truck. And the list goes on.

An underlying principle helps unite these disparate elements in a harmonious whole: “I reference what is considered rustic in other cultures,” Georgis explains. A case in point: the great room’s English oyster-veneered table, which he describes as something “considered not so fine, or rustic, from another culture—England—but which you would not expect to see in the mountains of America. These ideas of un-urban life are assembled in a way that I like to think is fresh.”