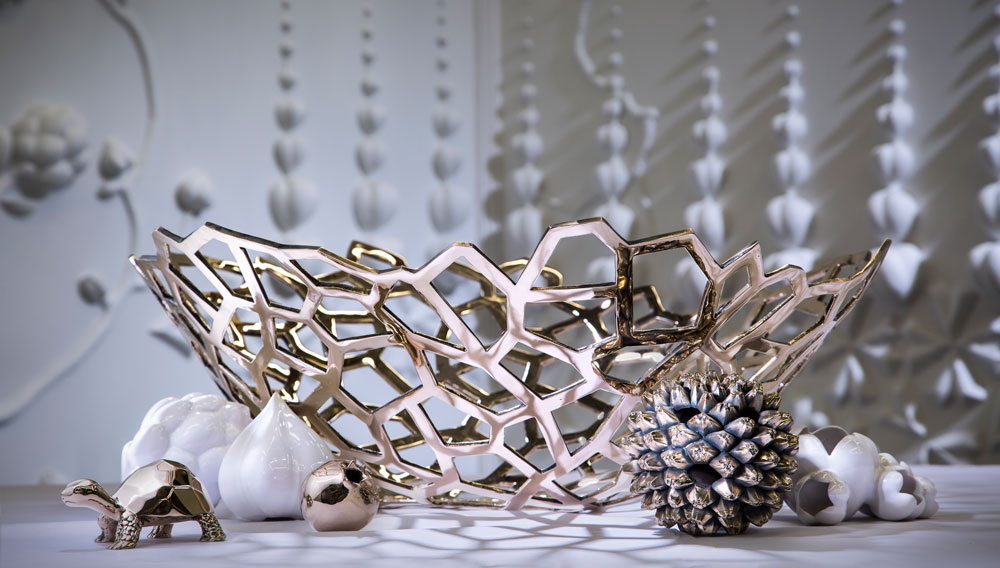 For his latest solo exhibition, Wilderness and Ornament, the Los Angeles–based designer David Wiseman has assembled nearly four dozen nature-inspired decorative items, from statement-making bronze room separators and ornate bowls to a series of site-specific plaster walls, which are adorned with handcrafted porcelain patterns with alternating rope-like, lacy, floral, and geometric patterns. Wiseman constructed the walls in his New York studio over the past year, adding finishing touches to the piece after it was assembled in the gallery. The walls serve as a backdrop to Wiseman’s other designs, which are arranged in the gallery’s rooms as they would be in a home.

“His room installation is stunning; it’s like nothing we’ve ever exhibited,” says Zesty Meyers, the cofounder of R & Company, the New York art gallery that will be hosting the exhibition from May 11 through June 25. “It brings to life David’s dream of executing the Gesamtkunstwerk—the total work of art—in which he designs a room in 360 degrees, from the architectural detailing to the lighting to the furniture. David has created a really one-of-a-kind design experience.”

Wiseman’s decorative works, each of which was created over the last two years, play on his exploration of contemporary patterns and organic forms. For example, a new bronze jali bowl has a relaxed cube-like structure reminiscent of magnified plant cells. Wiseman’s new works from 2015 include the roughly textured bronze pellet bowl, the curved Nopales mirror framed with thick bronze cactus pads, and the wall-mounted baby-owl votive sconce made with a polished bronze candleholder that hangs from a delicate bronze branch with sprouted leaves and flower buds.

“David Wiseman’s work is uniquely beautiful in part because he is approaching design from a very pure decorative sense,” says Meyers. “[His works] are also exquisitely rendered visual representations of nature, and I think many people look for ways to permanently incorporate natural elements into their homes.”