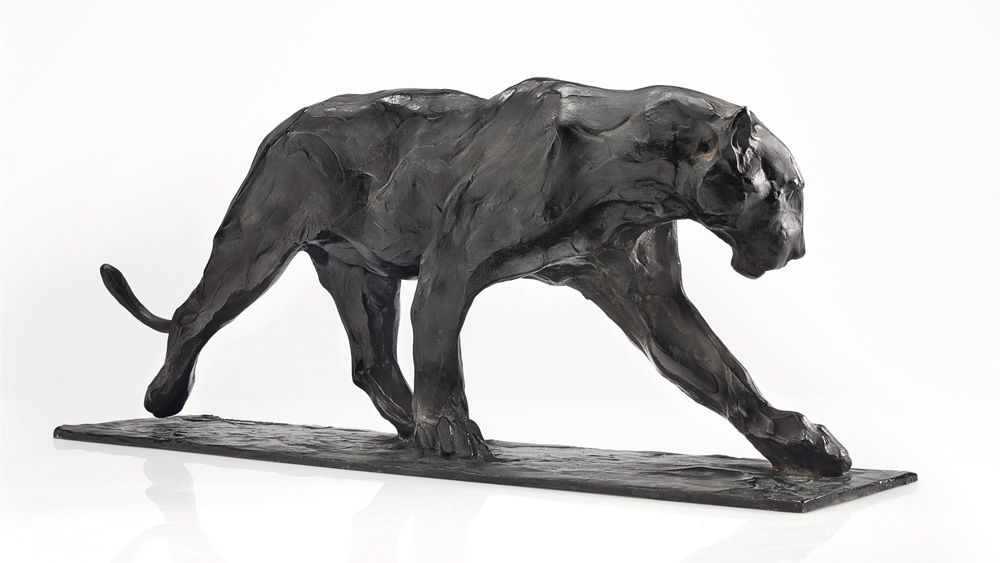 Animal prints have been a staple in stylish and aristocratic homes for centuries. It’s a look best left to the design experts, but no one can stop a cheetah pattern from making itself known. Christie’s is offering a unique opportunity to walk on this wild side via a suite of 17 animal-inspired works in its 60-lot design sale in Paris on May 22.

Alongside stylish and covetable furnishings by notable tastemakers like Line Vautrin, Jean Prouvé, Émile-Jacques Ruhlmann, and George Jouve, the auction house is presenting a special selection of animal figures and motifs, like a quartet of bronzes by Italian sculptor Rembrandt Bugatti (son of furniture designer Carlo Bugatti and brother of famed automobile designer Ettore Bugatti). The Panthère Marchant (Walking Panther), is a bronze from 1904, which carries an estimate of €250,000 to €350,000 ($295,400–$413,600). “The work, which retains its magnificent original patina, was acquired directly from the Parisian foundry where it had been cast, A.-A. Hébrard et Cie, in 1930 and has remained in the same family until now,” says head of sale Flavien Gaillard. Also of note, he says, is a small sculpture of a crouching jaguar, more modestly priced at €45,000 to €65,000 ($53,200–$76,800).

Bugatti’s oeuvre has found a cult following among design aficionados who have driven five of his sculptures past the $2 million mark, including his celebrated Babouin Sacré Hamadryas, a 1909 work that achieved an artist record $2,770,000 at Sotheby’s in New York in May 2015. Enamored by the exotic animals he used as his subjects, Bugatti is known to have spent considerable time studying them at the Jardin Zoologique in Antwerp during his time in the Belgian city.