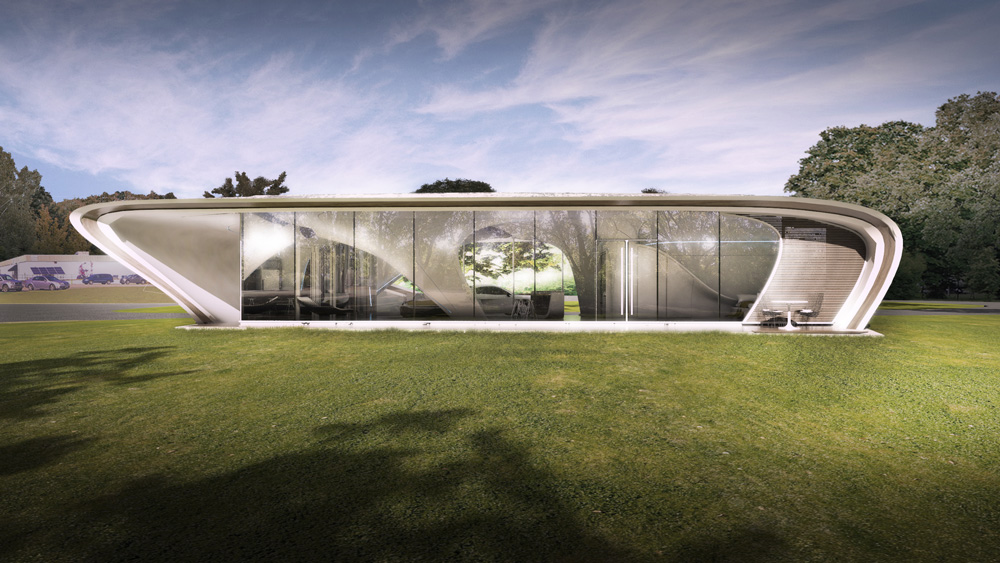 Once 3-D printing moved out of the laboratory and into mainstream culture, awe turned into opportunity. The success of altruistic and once-impossible applications like fully-functioning 3-D printed organs and prosthetic limbs meant we could also dabble in decorative pursuits—like jewelry and iPhone cases.

But progress is about dreaming big. Two ambitious companies have chosen to increase the scale of 3-D printed designs by creating the first freeform 3-D-printed house that incorporates conventional building materials. In other words, this is a home designed with the unbridled futurist creative liberties that 3-D technology affords, while being made from traditional, even routine materials. It is a sensible détente, and one that is getting that much closer to being realized.

In 2016, 3-D printing specialist Branch Technology hosted the Freeform Home Design Challenge and called for submissions that pursued the idea of a well-crafted habitat the leveraged 3-D printing technology. Award-winning Chicago-based architectural firm WATG’s Urban Architecture Studio won the competition with Curve Appeal, their sinuous swooping vision of residence that has dynamic curves, floor-to-ceiling windows, and a strong connection to the outdoors. For WATG, the competition had a compelling upside, given that the methods and materials for building structures have remained relatively constant.

“Building technology essentially has not changed from either timber frame or brick for hundreds of years,” says Christopher Hurst, WATG associate vice president and design director. “We are working toward a new shift in architecture and construction that allows designers to build at a worldly scale quicker and cheaper while giving new opportunity for mass customization.”

The project takes advantage of Branch Technology’s freeform 3-D printing process, which differs from traditional 3-D printing. As Hurst explains, “Branch Technology is taking its cues from how cellular structures in nature are made, where the bounds of the cell create strength, but it is the material filling of the cell that creates the majority of the cell’s strength and function. In this case, we’re using 3-D printing to enable creative freedom but allowing normal construction materials to become the strength and function of modern composite wall assemblies.”

The way both sides have collaborated is remarkably straightforward. As an architectural studio, WATG is well-versed in computer-generated, detailed 3-D models. The studio delivers a 3-D model to Branch and the company will “panelize, evaluate, and start the build,” says Hurst. “Branch Technology’s process is based around six-axis robotic arms, that have a large extruder mounted to them. The robots are loaded with the tool path associated with the object to be printed and then they are set to print.”

Inspired by the case study houses from the 1950s and 60s, WATG conceived of a space with an interior core and exterior shell. “The interior core acts as an abutment arch, connecting programmed features of the house as well as physically sub-structuring the exterior shell into one self-supporting system,” says Hurst. The resulting 1,800-square-foot expanse blends open concept living—with unobstructed kitchen and living areas surrounded by nature—with well-placed private quarters that don’t interrupt the rhythm or lose out on the view.

And those curves. Not impossible to create via conventional methods, says Hurst, though it would take a craftsman of exceptional skill to do it. The 3-D method ensures precision through digital modeling, and ultimately eliminates the risk of templated “copy and paste” architectural projects, says Hurst of Branches’ Cellular Fabrication. Subdivisions have much to look forward to.

Natural light is a vital part of Curve Appeal, and the WATG employed a technique called “solar carving,” which optimized the home’s design to include natural lighting as well as winter and summer heating and cooling strategies, like a breezeway. The project is also meant to be sustainable with Hurst explaining that net zero is the goal. “We are incorporating flexible solar photovoltaic cells to the roof as well as using incredibly efficient mechanical systems in the home.”

The home is also a statement about living within the natural world. The team ensured windows and doors could be opened and handled easily, allowing for instant access to the outdoors. The selected site is close to the Tennessee River, in Chattanooga, Tennessee, where Branch Technology is based. There is a porch and formal garden, as well as a carport built into the structure—so everything about the project encourages seamless, transparent ease.

As for when we can expect the actual home to debut, WATG assures it will happen, and that the project is currently in the testing phase. The entire endeavor signals a change in not only the design process but the way materials are used, says Hurst, “We see Curve Appeal as a prototype toward new progressions of architecture through its process of construction. We see architecture shifting towards radical design in the future and 3-D printing will make it possible.”

Will there be a world of ultra-customized, staggeringly complex structures at the level of Zaha Hadid, built for daily living? The future isn’t far off, says Hurst. “In the next 10 years, we are going to see a new line of architectural design coming forward that is truly unworldly.”