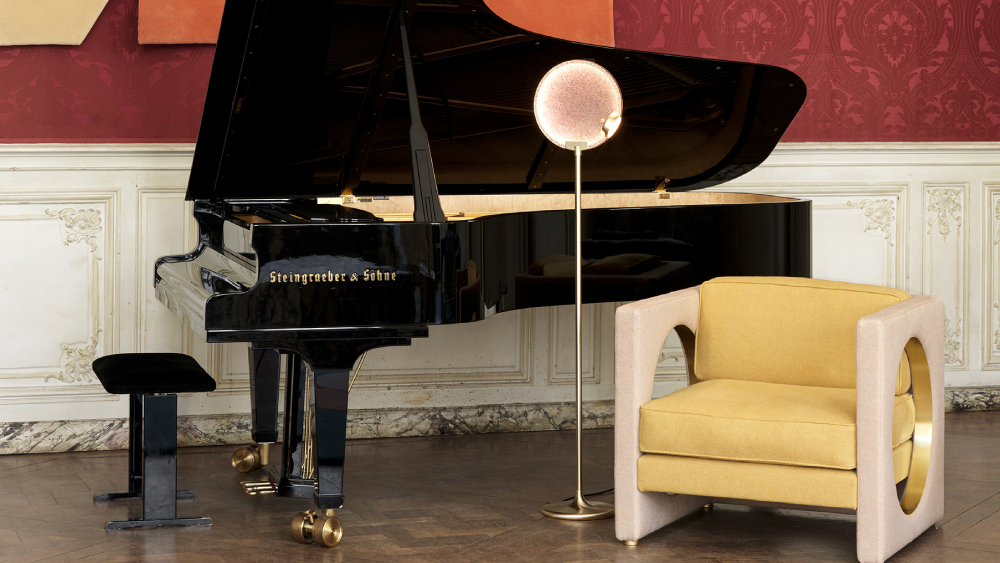 The design fair, a forum for collectors and industry folks to mutually ogle this chair or that sofa, has, like virtually everything else, had to rethink itself this year. The major fall fairs took several approaches: TEFAF New York became TEFAF Online, presenting just one piece per exhibitor on its website; London Design Festival and Paris Design Week hosted individuals at in-person talks by appointment only but otherwise moved the showcases mostly online. Here, a few of the highlights.

Brodie Neill was drawn to sustainability long before it was cool. The Australian designer is known for his pieces that incorporate recycled ocean microplastics, arranging them to resemble terrazzo. Second to that is Neill’s Supernova table, which he reimagined for the London Design Festival. The original, from 2013, had spindly legs made of recycled aluminum; here, Neill swapped that material for a repurposed bronze alloy. With its tinted-glass top, it’s a desk or dining surface that’s a touch chicer than it was before, while still maintaining the original’s environmental ethos.

The name Pierre Gonalons may not be among the Le Corbusiers and the Starcks of the French design canon yet, but his work was easily one of the most buzzed-about at this year’s Paris Design Week. The interior architect presented a solo showcase that did what Gonalons does best—that is, marrying disparate worlds of design. Many of the designer’s couches and chairs look almost vintage, but instead of being plopped in the living room of a light-filled midcentury residence, they’re cast in bright, contemporary fabrics and placed in the Hôtel de Soubise, a 1700s haunt of French nobles. It’s a moment that not only creates intriguing dialogues between the old and the new but also shows off Gonalons’s new work and ethos to dramatic effect—which, at a design fair, is pretty much exactly what you want.

Ettore Sottsass needs no introduction in design circles, but the artist could certainly do with an updated understanding. While he’s best known as the founder of the Memphis Group, an avant-garde collective whose colorful, blocky silhouettes served as welcome antithesis to the more subdued modernist works of the time, Sottsass’s lengthy career prior to Memphis’s 1981 founding is often forgotten. In those days, the Italian designer was less concerned with overt radicalism, as shown by the Commode column, which Friedman Benda brought to TEFAF Online in November. One of the few remaining examples of Sottsass’s tower pieces, Commode demonstrates his penchant for experimentation—the unit seems to play with its form more and more as it ascends—as well as his background in architecture. In other words? This piece is a chance to own a much-coveted Sottsass without your living room resembling a bizarre acid trip.

Sergio Rodrigues’s Itamaraty desk is the piece you most need to add to your collection (or home office) now. The designer created it for one of the Brazilian embassies in Rome, representing a rare blend of the two regions’ design sensibilities. The desk is made of solid jacaranda, a subtropical tree found near Rodrigues’ studio in Rio, but its straightforward shape and chrome-plated brass trim are more indicative of Italy’s midcentury than Brazil’s. A belated introduction for those who don’t yet know, love and collect Rodrigues’s work, and a must-have for those who already do.