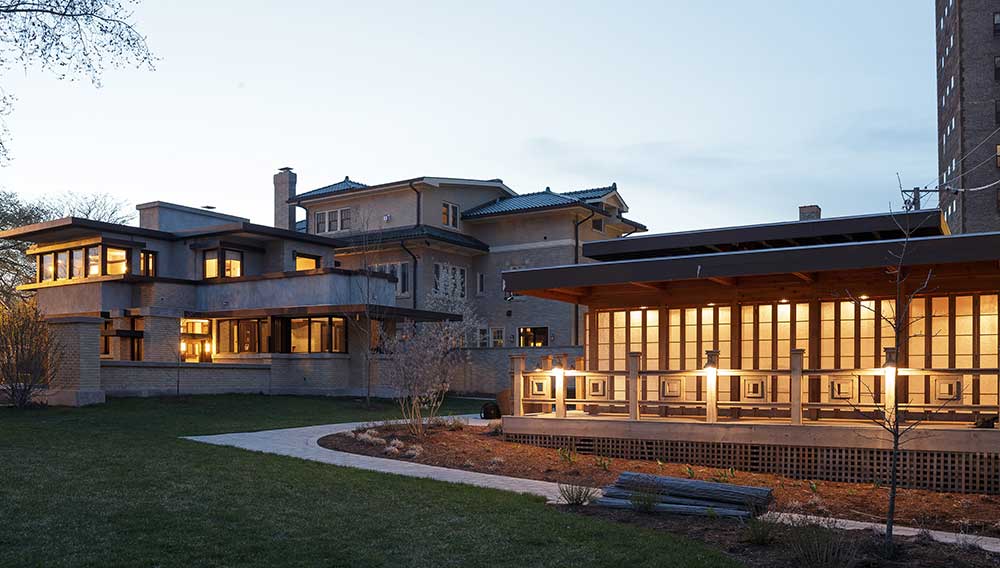 Perhaps the most notable address in Chicago’s North Side, the Emil Bach House was designed by the iconic American architect Frank Lloyd Wright—and now anyone can reserve the property for special events and overnight stays. The property is located at 7415 N. Sheridan Road in the Rogers Park neighborhood north of downtown and just a block from the shore of Lake Michigan. Built in 1915, the house was declared a Chicago Landmark in 1977 and was extensively restored in 2013.

Its design departs from the openness that Wright employed for his Prairie-style houses. The slab roof lends a sense of cubic containment and efficiency of scale to the structure, which is located on a small city lot. (The Emil Bach House is one of Wright’s smallest urban designs.) The home was originally constructed for the president of the Bach Brick Company in 1915 before Wright journeyed to Japan to work on the famed Imperial Hotel. The Emil Bach House is a relatively early example of Wright’s distinctive design approach, which provides architectural insight into his subsequent projects. Wright viewed space as the “breath of art,” with the Emil Bach House’s interior exemplifying his effort to marry form and function. Built-in seating around windows and an integrated dining table conserve floor area without sacrificing communal amenities. To foster a sense of domestic unity, the fireplace serves as the focal point, with all rooms (including the kitchen) extending from it. The cantilevered second-floor accommodations maximize space without extending the structural footprint. Wright’s use of balconies, planters, colors, and large windows helps bring an indoor-outdoor effect to the home’s interior.

With two bedrooms on the second floor, as well as a study with a trundle bed, the Emil Bach House sleeps as many as six guests. Rates start at $995 per night, with a minimum stay of two nights. (emilbachhouse.com)