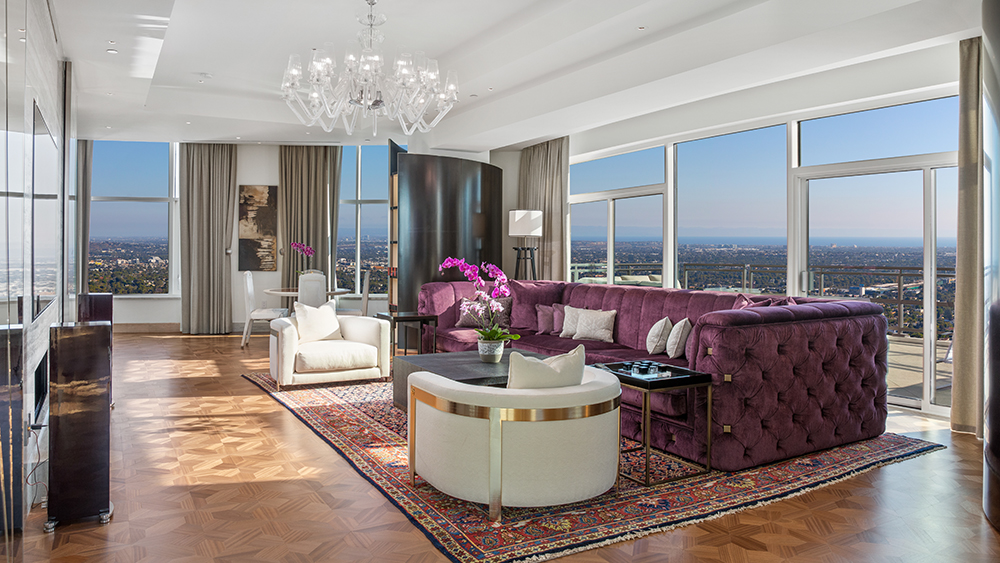 There’s “money’s no object”—and then there’s “money is absolutely no object”. That was the case with the Cavalli Penthouse, perched high on the 38th floor of the celebrity-rich the Century condo tower in Los Angeles’ Century City.

Designed by the flamboyant Italian designer, Roberto Cavalli, this 5,254-square-foot, two-bedroom retreat was the first Cavalli-designed home in the US when it was unveiled in 2016, and is a showcase for Cavalli’s finest custom finishes and furnishings.

Take the onyx and marble lining the walls, bathrooms and kitchen. More than 150 slabs, hand-picked by designers at Cavalli Home, were shipped in from Italy and craned the 38 floors up into the apartment. Sapele mahogany for the exquisite parquet flooring in the hallways, great room and dining room were sourced by Cavalli’s Florentine craftsmen, then boxed-up and delivered to the Century for time-consuming installation.

Then there’s all the furniture, fabrics and furnishings—again, all hand-created by Cavalli interior designers working with Italian design coordinators Jumbo Group, who are based in the Brianza design district near Lake Como. Nothing screams Roberto Cavalli more than the great room’s oversized plum-purple velvet sofa and pair of semi-circular creamy side chairs with gold accents.

According to records, the Cavalli-loving owner, an international businessman who prefers to remain anonymous, bought the half-floor penthouse in 2016 for a fire-sale $10.5 million—down from $14.8 million a year earlier.

The current owner did a full redesign of the penthouse in 2016.  Photo: Anthony Barcelo/Compass

He then commissioned a total make-over and redesign from the Jumbo Group, in conjunction with Roberto Cavalli Home and Gianfranco Ferré Home. According to Fridman, the penthouse was completely gutted from its previous incarnation and pretty much every inch of original material jettisoned in favor of the aforementioned marble, onyx, mahogany and more.

And because the owner was no fan of the condo’s structural internal columns, Jumbo Group’s designers commissioned special custom pieces of furniture—think oversized bookcases, closets and cabinets—to enclose and disguise them.

But “while the home is naturally all about the interior, arguably it’s the exterior, with its oversize terracing and astonishing views, that makes it unique within the Century, and goes a long way in justifying its pricing,” notes Fridman.

The views stretch all the way to the ocean,  Photo: Anthony Barcelo/Compass

The huge main terrace, with unobstructed views over the Los Angeles Country Club golf course and all the way to the Pacific Ocean in the distance, comes with a gas firepit and acres of space for entertaining. There’s also a large terrace off the master bedroom suite, and a breakfast terrace off the stunning Gianfranco Ferré-designed professional-grade kitchen. The kitchen itself features high-tech Miele appliances and coffee-colored marble for the breakfast island and countertops.

As for that master suite, the bedroom, with its custom coffered ceiling, comes with its own fireplace, and leads into a maze of elegant hallways, huge walk-in closets and dressing rooms. The master bathroom is lined with rich, lavender-blue-colored marble for the walls and sinks, and is steps away from an oversized, Aspen-wood sauna.

Completed in 2009, the Century—designed by renowned architect Robert A.M. Stern—has been a magnet for A-list celebs and international powerbrokers. Arguably its most famous resident is Candy Spelling, wife of the late TV producer Aaron Spelling, who created everything from Charlie’s Angels and The Love Boat to Beverly Hills, 90210. In 2008, Ms. Spelling sent the LA property market into shock when she ponied-up a staggering $35 million for the top two floors of the oval-shaped tower to create a 16,500-square-foot mega-penthouse.

Other famous residents include singers Rihanna and Paula Abdul and restauranteur Nobu Matsuhisa. In June, Friends star Matthew Perry off-loaded his 40th-floor, 9,300-square-foot penthouse—two floors above the Cavalli Penthouse—for $21.6 million. It had been listed as high as $35 million.

“We think the penthouse will appeal to an international client who, like many of the residents at the Century, own multiple residences around the world and are looking for a move-in-ready property,” says Compass’ Fridman. “In today’s market, there’s considerable appeal for a residence to be furnished, and not just with Roberto Cavalli furnishings. To buy new furniture, especially custom pieces, delivery can take well over a year. This is turnkey.”

Mr. Fridman shares the coveted listing with his Compass colleague Cassandra Petersen, and with Alexandra Cooper at the Icon Realty.

Check out more images of the penthouse here:

This $19.5 Million Dumbo Penthouse Is Now Brooklyn’s Most Expensive Listing

This 500-Year-Old Boticelli Painting of Jesus Just Sold for $45.4 Million