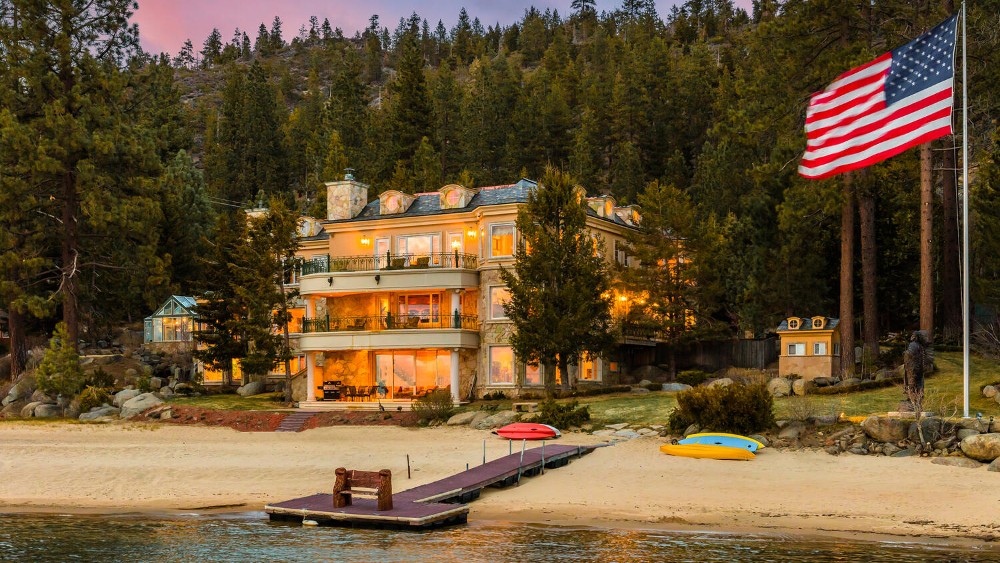 When Charles Bluth and his wife, Cindy, first came to Lake Tahoe in 1985, he was set on buying a specific piece of land that had been on and off the market for a few years. “Initially it was a very ‘80s marina with a French restaurant which had closed years earlier,” Bluth tells Robb Report. “The location was the best on Lake Tahoe, in the dead center of the lake facing west. There were just the most spectacular sunsets from the property.”

Located on Tahoe’s Nevada side, the land is in a private gated estate that Bluth describes as quiet and laid back, far from the tourist action of the north and south shores. While you’re just 15 to 30 minutes away from Tahoe’s incredible skiing, shopping, casinos and restaurants, the property feels exceptionally private.

After eyeing it for some time, Bluth bought the property in 2000 and began constructing his dream home, which has been the family’s primary residence since they moved in after construction was finished in 2004. Owner of Bluth Development, Bluth has been building high-end homes for more than 50 years and as a fan of classical architecture, he wanted to create something unique to the area that also suited he and his wife’s design passions.

“This is a classic French manor,” Bluth says of his home, which is listed for $100 million off the MLS. “I make sure when I build a home of this nature that I pay attention to the classic architectural look and feel. For example, the ceilings are all 10-feet high; the entry is 25-feet high with a double stairwell; the ceiling is hand-painted on linen; the entryway has 1,000-pound pillars; and the main home’s exterior stone is imported from Lake Champlain in upstate New York.”

The four-acre property has a main residence, two guest cottages, a greenhouse, tea house, koi pond, waterfall, lawns and a Zen garden, all situated on a private sandy beach overlooking a 160,000-square-foot private marina with 12 boat slips. The former commercial marina had around 80 slips, but Bluth downsized over the years to 12 for his own boats. There’s also a three-car garage with a workshop and a separate four-car garage.

“No estate gets the sandy beaches like we do here on the East Shore,” says listing agent Jean Merkelbach with Engel & Völkers Lake Tahoe. “Other parts of the lake have more of a pebbly beach and a rocky shoreline, so a sandy beach like this is extremely rare.”

The main residence spans 20,000 square feet and has four bedrooms, including a 2,500-square-foot primary suite with a fireplace inspired by the Palace of Versailles. The rest of the home exudes grand living as well: Both the family room and the office are both 2,500 square feet and each room overlooks the lake.

Elsewhere, there’s a lovely gourmet kitchen, a gym, a wine cellar with room for 2,500 bottles, a movie theater and a lower level for entertaining. There are three elevators throughout the home for easy access to all the incredible amenities. Bluth also planted around 700 evergreen trees on the property to further enhance privacy.

“Everybody said, ‘Why don’t you build a Tahoe-style wood house?’” Bluth recalls. “I said, ‘That’s pretty boring.’ Our house has thousands of details you have to take into consideration.”

For example, the theater was inspired by an old theater on Sunset Boulevard in Los Angeles, with an Egyptian look and fixtures from Spain, while the limestone cellar features an etched door of angels and cherubs—elements his wife loves. His wife also created a massive kitchen so that when they entertained, five people could prepare food comfortably.

Even the powder room is incredibly detailed and has a circular gold-leaf ceiling, while the primary suite has won awards for its marble and onyx floors, featuring onyx shipped in from Jordan. The rest of the home has handcrafted wood parquet floors. Bluth says in total, painters were in the house for around 32,000 hours.

Views of the lake and mountains from a terrace  Scott Thompson

Then, of course, there’s the spectacular setting. “There’s no one on the lake that has the kind of views we have,” Bluth says, “I don’t care what window you look out of, all you’re looking out at is the lake.”

One of the family’s favorite features is the greenhouse, which has a Jacuzzi. “There’s nothing like getting in the Jacuzzi with a glass of wine during a winter storm and watching the snow come down,” he says.

In recent years, especially since the onset of the pandemic, Nevada’s Tahoe side has become increasingly popular. with a large part due to the tax benefits (like no income tax, personal income tax or inheritance tax, among others.)

“In the last couple of years with the threat of wealth tax in California, people took the opportunity to relocate to Nevada,” Merkelbach says. “Then of course the pandemic surge of people coming here because people wanted to be in more rural settings.”

The limestone-clad wine cellar houses up to 2,500 bottles.  Scott Thompson

The entertainment room features a billiards table and opens directly onto the lake.  Scott Thompson

The greenhouse with a Jacuzzi  Tess Hunt